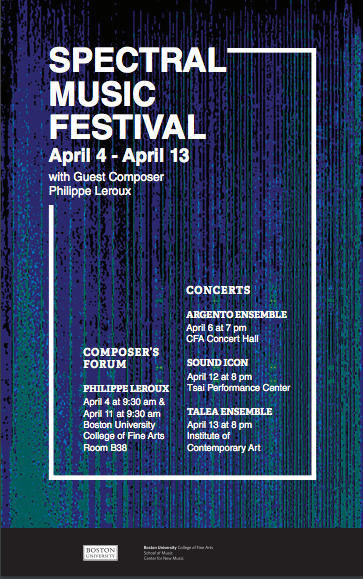 The festival will explore the trend of Spectral Music from its early works by Grisey and Murail into the present with recent works by Philippe Leroux and GF Haas. Concerts will include performances from New York-based Argento Ensemble, a Boston premiere from Center for New Music director Joshua Fineberg and a US premiere of Tristan Murail’s monumental Liber fugeralis for Ensemble and live video.

Guest composer, Philippe Leroux is one of today’s leading international composers, his large body of music (seventy pieces to date) is widely performed in throughout the world on the most important festivals and concert series. He has worked with leading ensembles and orchestras, and has lectured and taught throughout the world — notably as  the composition professor at IRCAM’s Cursus from 2001-2006— and now teaches composition at McGill University and serves as composer-in-residence at Ensemble MEITAR in Tel-Aviv.

For more details on the Center for New Music, visit https://www.bu.edu/cfa/music/research-centers/center-for-new-music/