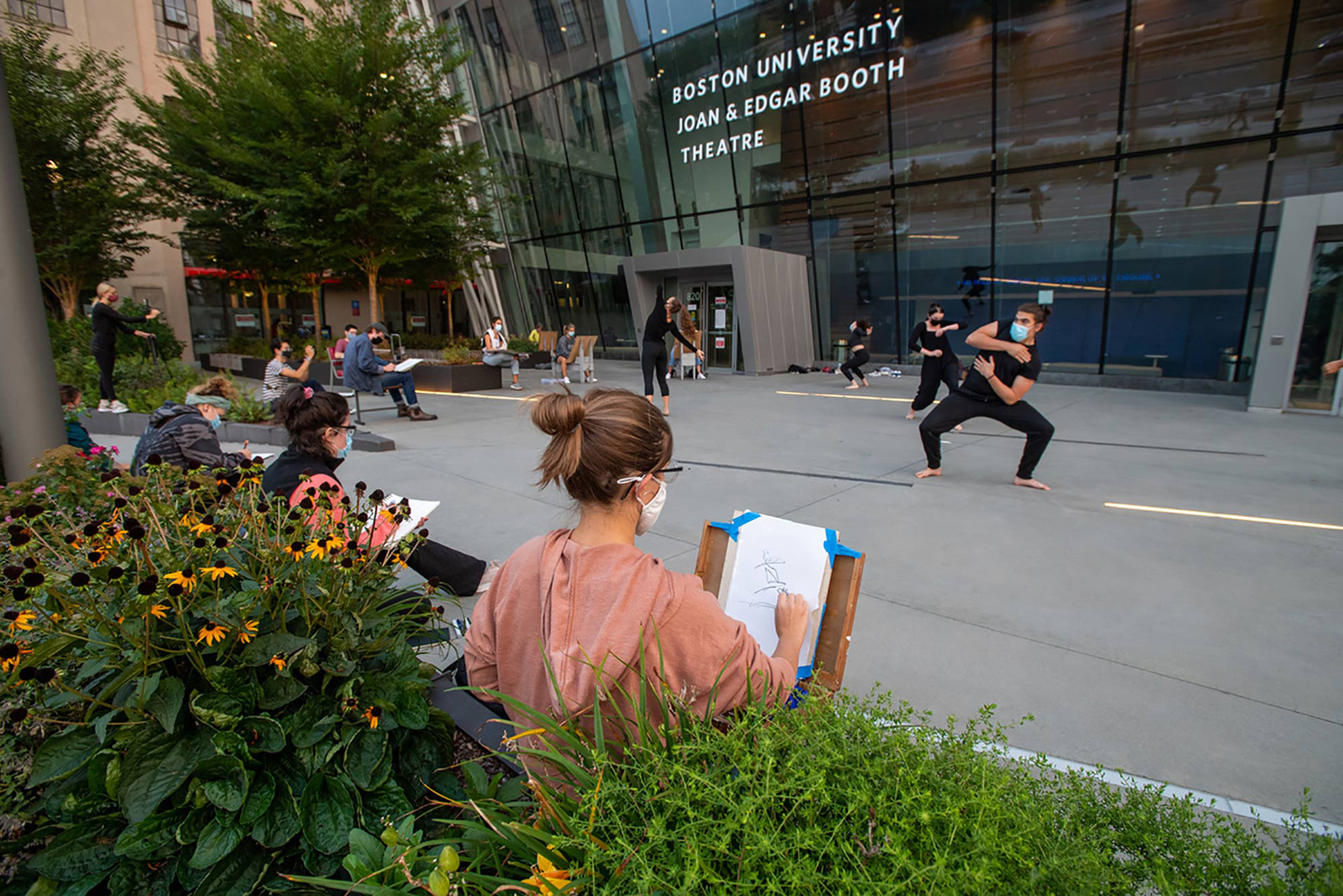 In a CFA ArtPop on September 16, movement students and visual artists collaborated on an exploration of gesture and movement on Booth Theatre Plaza. Photo by Cydney Scott, BU Photography

2020 has transformed, among other things, how artists interact with the world. Gone are the days of packed theatres, audiences, and crowds. So, the question remains: how do we continue to connect with people everywhere in an age when people can’t be present together?

ArtPops, a CFA-wide initiative featuring a series of pop-up performances and art experiences from all three schools, is proving to be a creative — and entertaining— solution. The ArtPops were designed to be spontaneous, bringing the BU community together in a safe and casual way to witness the true innovation of artists across campus.

After School Directors Dana Clancy (School of Visual Arts), Susan Mickey (School of Theatre), and Gregory Melchor-Barz (School of Music) met with Dean Harvey Young over the summer, Assistant Professor of Movement Yo-EL Cassell was invited aboard the initiative to develop some specific scenarios in which the ArtPops could take place.

Cassell said one of the ultimate goals is to simply “energize the spaces” of BU, but spoken like a true artist, he is seeking to further “welcome the spaces with hope, possibilities and creativity within the walls of restriction” caused by COVID-19.

So far, the program has produced a number of pop-up experiences, from spontaneous concerts to gallery shows to videos.

Clancy reflected on the importance of spontaneity in the initiative. “The Directors had been talking about similar ways to embrace and creatively lean into change and provide even small moments of positive surprise for people at a time when a lot of the recent surprises we’ve all faced have been more unpleasant,” she said. “Experimenting and doing something new means that one of the goals is simply to bring experimentation into the foreground. Some new goals might come out of the act of doing these events. It’s nice to work in a way that doesn’t have a predetermined outcome.”

An example of such experimenting at its finest, one of the very first ArtPops came from the School of Theatre in the form of a socially-distanced sidewalk talk show, “Chilling with the Players.”

The School of Theatre’s second pop-up was a virtual performance entitled “Embodying with Joy.” Cassell’s movement students danced through the corridors of Booth Theatre and reacted to the traffic flow signs on the floors. The music featured songs from the various childhoods of the seven movement artists, giving the performance a very improvisational and whimsical feel. Like other School of Theatre pop-ups, this one lives on Instagram.

“I like to think of joy not of happiness, but like an image of a lightbulb flickering in a darkened hallway,” said Cassell when asked what “embodying with joy” means to him. “The light is what keeps us moving forward—we follow that light, that joy through navigating corridors.”

Mickey, the director of the School of Theatre, was thrilled to see the ArtPops initiative take off. Like most art, said Mickey, the project stemmed from an artist’s basic need to create.

“More than anything, it was a declaration of presence. So many of our fellow professional artists are struggling right now with museums, galleries, concert halls, and theatres shuttered,” she said. “We felt the need to celebrate our ability to make our art in person in the way that we could. ArtPops were a ‘welcome home’ for us and for everyone who participated.”

And, when Mickey says everyone, she means it. The School of Music’s contributions to the ArtPops initiative included moving performances of Bach’s Cello Suite No. 3 and Sonata No. 5 for Two Violins by Jean-Marie Leclair, both in the newly renovated Stone Gallery.

The first School of Music pop-up, in the sun-soaked Stone Gallery, featured DMA student Tyla Axelrod (CFA’23), who performed a few movements from Bach’s Cello Suite No. 3. And the second music program, also in the gallery, featured Sonata No. 5 for Two Violins by Jean-Marie Leclair. Performers Inga & Freya Liu are both graduate students of Professor Bayla Keyes.

For anyone on campus who found themselves in Gallery 5, on the fifth floor of 855 Comm Ave, in September, they were met with a pop-up exhibition of SVA student work made during the pandemic. “Your Work Here” evolved as more students add their pieces to it. The exhibition was on view to the BU community through October 9.

A collaboration between the School of Theatre and the School of Visual Arts, called “Artistry in Motion,” featured Cassell’s movement students performing on plaza in front of Booth Theatre while visual arts students from both the undergraduate and graduate programs observed, sketched, and painted their movements.

Movement students and visual artists explore gesture and movement in the “Artistry in Motion” ArtPop outside Booth Theatre at sunset.

“Dana and I always wanted to embrace an experience where two forms are speaking to each other—in tandem and in contrasting colors,” said Cassell. “We thought we should celebrate what CFA is about—merging our schools of thought, learning about them, championing them and celebrating them.”

Clancy saw the collaboration through a broader lens of capturing movement as a witness. “Translating the expansive energy of a person in front of you into a space that is contained – but can be made to hold a parallel feeling of expansiveness – feels physically and mentally engaging,” she said. “I can only speak for myself, but a number of faculty talk with students about gesture in ways that are quite philosophical and aimed at having a student come to their own conclusion through experience and attention.”

The ArtPops were spontaneous, yes, but they were also the result of a College-wide collaborative effort. The drive within student-artists across CFA — visual, theatrical, musical — came together to move, produce, create, draw, play, and inspire. As humans, we rely on art to cope with the present and carry us into the future. CFA students and faculty alike have managed to do just that: help us cope, and carry us forward.

Keep your eyes and ears open on @buarts social media channels, as well as @bu_music, @butheatre, and @bu_visualarts, for more pop-up projects and creative explorations this year!