Originally published in the Spring 2021 issue of CFA magazine. By Mara Sassoon.

Kim Raver stood on the Grey’s Anatomy set for the first time since the medical drama halted production in March 2020. She was clad in full PPE—not just a mask and scrubs, but a heavy personal respirator hood.

The weight of the hood, the way it muffled the sounds around her, helped her immerse herself in her character’s experience. It also compounded the emotional weight of the scenes she was about to start filming for the show’s 17th season.

As her character on the Shonda Rhimes ABC medical drama, cardiothoracic surgeon Teddy Altman, she was about to embark on a story line in which the show’s Seattle hospital was being ravaged by the virus. 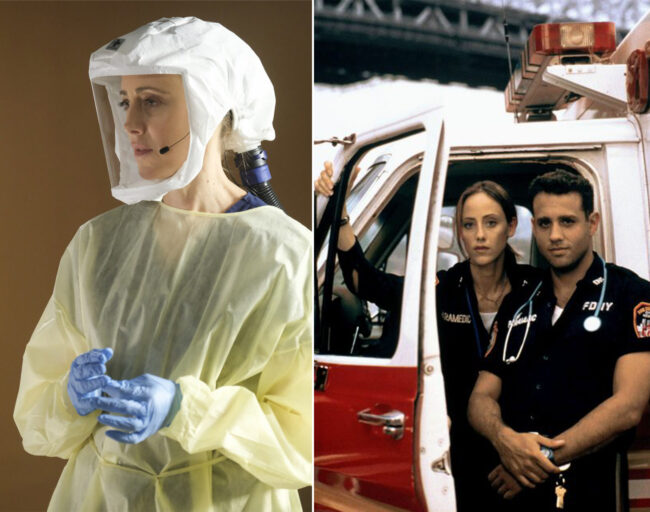 By the time Grey’s Anatomy began filming in September 2020—six months after production on its previous season abruptly shut down—the worldwide death toll from COVID-19 had climbed to almost 1 million. The show’s writers felt it was their duty to incorporate the global pandemic into the new season’s plot. As showrunner Krista Vernoff (CFA’93) told The Hollywood Reporter, “To be the biggest medical show and ignore the biggest medical story of the century felt irresponsible.”

Raver (CFA’91) was struck by the experience of filming scenes that echoed what she had watched play out in the months the show was on break. The first episode of the new season found the Grey’s doctors dealing with PPE (personal protective equipment) shortages and navigating a hospital overcrowded with COVID patients.

“It’s so strange to be telling a story that we’re universally going through in the moment,” she says. “I’ll be doing a scene, and then after I take off whatever costume I’m wearing, there’s this feeling of, ‘Oh my gosh, we’re still in it.’ There’s no separation. Usually, we’re telling a medical story that people can understand emotionally, but that they aren’t actually going through.” Raver says the cast and crew were united by a desire to use the show as a platform to honor the arduous efforts of healthcare workers during the pandemic.

“I just feel really grateful to be able to tell these stories, especially when I see what our frontline workers are actually having to go through,” she says. “We’re in a time where there’s enormous loss and grief, and you feel like you have a purpose in telling them.”

Raver’s experiences grappling with dark, difficult subjects are a long way from her first foray into showbiz. Before she was playing a paramedic on Third Watch or a heart surgeon on Grey’s Anatomy, the New York City born and raised Raver appeared on Sesame Street as a young child. “I’d walk onto the sound stages and it was magical,” she recalls. “There were all these Muppets everywhere.”

But while she has fond memories of being on the Sesame Street set, Raver says it was her time at the First All Children’s Theater that really sparked her desire to act. When she was 13, she joined the after-school theater program, where she counted actor Ben Stiller among her peers. The performers were all children, ages 6 through 17, and all of the productions were written especially for the theater company. The famed late writer and theater director Elizabeth Swados even penned one of the performances.

“I just loved it. There was something about performing and telling stories. I knew then I wanted to be an actor,” says Raver. “It became a big part of my life because eventually I had to choose: do I want to be a regular teenager and hang out with my friends from school, or do I want to be a part of this company? It was a big time commitment. We weren’t allowed to be even a minute late. I was at this theater every single day, right after school until the evening, and then I was doing homework. It definitely formed my self-discipline.”

At BU, Raver says she met like-minded classmates—and still keeps in touch with many of them. “When I think about my experience at BU and the community that I had there—and that I carried on with me since graduating—I realize it’s an important thing to have as an artist and as an individual. It’s such a tricky business, and you need that kind of support,” says Raver. “I tell young actors just getting out of school that your community when you get out—the people you went to school with—is so important.”

When she was starting out in New York City just after graduating from BU, Raver gathered with fellow alumni and other creatives she met through her network to rent performance spaces and put on productions, “just to stay in working shape while we were auditioning.” Finally, she landed her breakout role in the 1995 Broadway production of Holiday with Laura Linney and Tony Goldwyn. When she started rehearsing for the show, she couldn’t help but reflect on her performance in Twelfth Night at the Huntington Theatre while at BU. “I remember thinking what incredible prep for Holiday I got from that experience, from being up onstage during the rehearsal time—practicing stage combat and doing vocal warmups—all the way to the performance. I owe a lot to my BU training.”