Graphic designer Sarah Bassett sometimes turns to more physical crafts to give her work a texture and depth, a tangibility, that Adobe software can’t provide. Photo by Patrick Strattner

Originally published in the Spring 2021 issue of CFA magazine. By Andrew Thurston | Illustration by Celyn Brazier

The essential tools of cross-stitch aren’t exactly graphic design staples. But in an era when so much design lives on-screen, created with clicks and keystrokes, Sarah Bassett sometimes turns to more physical crafts—cross-stitch, printmaking, silk screen, collage—to give her graphic design work a texture and depth, a tangibility, that Adobe software can’t provide.

Bassett (CFA’15) made her first professional cross-stitch at Converse, which she joined as a CFA intern and left in 2020 after rising to senior designer. Curating an in-house gallery show celebrating design work and art by women at the footwear company, Bassett picked up a needle and thread for her own contribution: two cross-stitches emblazoned with “No” and “Nope.” 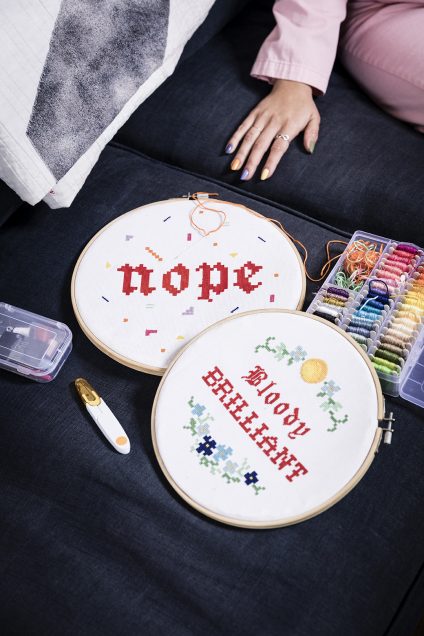 The “Bloody Brilliant” cross-stitch review was for Lucy Foley’s The Guest List, a summer 2020 pick for Hello Sunshine’s Reese’s Book Club. It became an Instagram promotion for the book.

“It was a traditional female-driven medium that I was taking ownership of,” she says of her choice of cross-stitch for the show, Ways to Go, which coincided with International Women’s Day 2019. It was also a way of pushing through her own fear of saying “no” to people. “Through the act of slowing down and focusing on each stitch, I was able to really ingrain those words [“No” and “Nope”] into my mind and meditate on that mantra as I created the piece.”

Now a freelance designer and art director based in California, Bassett was most recently a senior designer of social and editorial at Hello Sunshine, the Reese Witherspoon–founded media company. She’s created photo and video set designs, social media branding, packaging, and more. She’s even produced another cross-stitch: a flower-framed two-word review, “Bloody Brilliant,” for Lucy Foley’s The Guest List, a summer 2020 pick for Hello Sunshine’s Reese’s Book Club. That combination of old-fashioned elegance and modern boldness became an Instagram promotion for the book.

“I’ve always looked at graphic design as a means of solving problems,” says Bassett. “The first thing I ask myself is, ‘What medium would serve this best?’ In some instances, it’s a cross-stitch; in some, an illustration; in some, it’s tried-and-true graphic design.”

Many designers keep inspiration folders, others fill Pinterest boards. Bassett has an inspiration trunk. Originally her late uncle’s, the dark wood and leather chest is edged with the dents and chips of frequent use.

“It’s a treasure trove of clippings,” says Bassett. “I collect small treasures in this trunk, hoping to bring new life to the bits I’ve found.”

Among the paper gems: stacks of security tint envelopes, crosshatched with lines and swirls to keep prying eyes from looking at confidential mail. “All the patterns are so different. I love thinking about the secrets they keep.” She last used them to inspire backgrounds on cards she silk-screened. The trunk also holds some unusual souvenirs from the part-time job Bassett had at CVS through high school and college.

“I worked in their photo department,” she says. “They have photo machines where it trims the edges off prints.” The offcuts are a bulky column of white edged by tiny slivers of photo. “They fascinate me. They create these beautiful patterns when stacked side by side.”

Bassett traces her interest in patterns and textures back to printmaking classes at CFA.

Although most of her design work isn’t handcrafted—Bassett leans on Adobe software as much as every other graphic designer—she encourages those starting in the industry to learn tactile, physical skills. 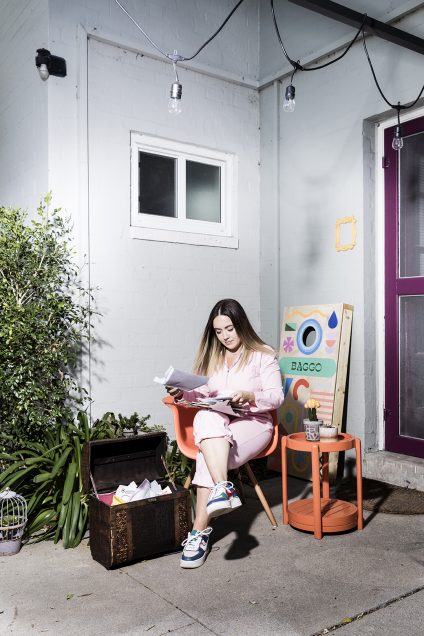 Bassett keeps a trunk filled with objects and patterns that she uses for design inspiration.

“In graphic design, Photoshop, we’re working in layers,” she says. “Printmaking really forces you to slow down and look, to consider layers in a meditative way: how are you building those fields of color, these textures on top of each other, to create the final image? It involves a lot of planning.”

“I’ve been trying to bounce between my laptop and my iPad,” says Bassett. She’ll start by laying out type in InDesign, then export the file to her iPad where she’ll use an Apple Pencil and the Procreate illustration app to add a hand-drawn element. “I juggle back and forth. It frees things up: when you’re able to work with the Apple Pencil, it’s a little less restricting.”

It’s a technique she recently used on a personal project, The Way We Scroll, a digital mindfulness and decluttering blog that Bassett says is “like Marie Kondo for the digital space.”

“I first designed the logo in [Adobe] Illustrator and slightly stretched the script used in the word ‘Way,’” she says. “I then imported the logo to Procreate and redrew the script and shifted the letters around until I was happy with it. I then brought it back into Illustrator to refine and finalize.”

Bassett only recently made the jump into freelance work, so she’s now busy adding new clients to her roster. She’s also starting a podcast, At Your Own Risk, with illustrator Dana Drew. In every episode, the pair will interview creatives and entrepreneurs, with a particular focus on imposter syndrome, the feeling of self-doubt that leads many to believe they’re not cut out for their chosen field.

“I’ve found that since there is a stigma in carving a career path in the arts, I always skewed on the side of playing it safe: I used to define success as finding stability in my career, even if that meant, at times, compromising my passions,” she says. “What I’m embracing moving forward is that taking risks that keep your priorities, values, and passions at the forefront will always be worth it.”