With a team of local street artists, Josué Rojas (’15) painted the mural Birds of the Americas in San Francisco’s Mission District. Photo by Gabriela Hasbun

Originally published in the Spring 2021 issue of CFA magazine. By Marc Chalufour

Hundreds of murals illustrate the streets and alleys of San Francisco’s Mission District where Josué Rojas works. They tell the stories of immigrants to the historically Latinx neighborhood. They honor women and LGBTQIA+ pioneers. And they give a voice to a community pushing back against police violence and gentrification. Graffiti and street art merge in this open-air gallery.

Rojas (CFA’15) has lived or worked in the Mission since he was a toddler—his family settled here after fleeing El Salvador’s civil war—only leaving to spend two years at CFA. Since first picking up a paintbrush as a teenager, Rojas has developed into one of the community’s leading artistic voices, frequently exhibiting his work, painting murals, and encouraging other artists to tell their own stories.

“In this community, art is the glue,” he says. The neighborhood that led him to art and continues to inspire him today has also given him the confidence to take a big leap: in 2021, he decided to strip away his other obligations—including running a local nonprofit—and focus full time on his art. 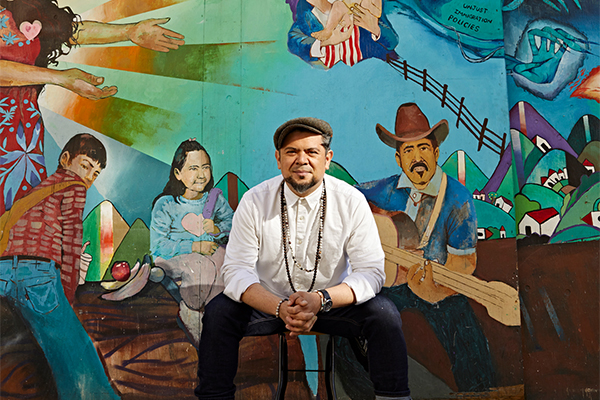 Rojas’ mural Enrique’s Journey (2009) was inspired by Sonia Nazario’s book of the same name and is located at Balmy Alley in San Francisco. Photo by Gabriela Hasbun

Rojas says his life could’ve gone in a very different direction. His father died when he was 15, and he began acting out. “I started getting in trouble, writing graffiti.” But he also got a part-time job at Precita Eyes Muralists, a nonprofit that has promoted art in the Mission since the 1970s. Soon, he was learning to paint.

“It was the first time I had found something that I was actually good at,” he says. Small jobs followed: designing murals, illustrating stories for the Pacific News Service, a publisher of independent journalism. Rojas began writing for them as well, continuing to report while he studied painting as an undergrad at the California College of the Arts.

Reporting trips to Central America inspired his art and gave him the financial flexibility to pursue it. But when journalists began getting killed by gangs, Rojas reevaluated his plans. He learned about BU while attending the Institute for Recruitment of Teachers at Phillips Andover Academy in Andover, Mass., which promotes diversity in teaching and educational leadership. He liked the idea of stepping away from home to see what he could accomplish when focused entirely on his art.

Rojas speaks of art as a language and says his decision to study at CFA helped him expand his vocabulary. “I felt very comfortable with urban art and what’s understood as Mexican heritage—classic murals inspired by Diego Rivera and then evolving into the Chicano movement of the 1960s,” he says. Two years in Boston allowed him to develop classic techniques and styles, like abstract expressionism. “Now I feel very comfortable being bilingual—I can speak East Coast and West Coast within American art.”

His thesis collection, The Joy of Exile, featured a series of paintings, but Rojas’ vision extended well beyond the canvas. He continued the images onto the walls and mixed in stanzas from a friend’s poem. In what is a Rojas trademark, cartoonish characters clashed with organic forms and familiar logos. The Boston Globe wrote that the installation “has the quality of a fever dream: roiling color and gesture. Violent imagery leavened with pop culture references.”

Rojas returned to San Francisco as soon as he completed his MFA in painting. As one of his class’ Kahn Award recipients, he received a grant that helped him set up a studio in the Mission and fund his next exhibit, ¡Gentromancer! He also accepted a position as executive director of Acción Latina, an organization that promotes arts, community journalism, and civic engagement in Latinx communities in the Bay Area.

For ¡Gentromancer!, which opened in 2016, he focused on the threat of gentrification to the Mission—and played with the styles used for his thesis. The 1980s cartoon robot Voltron frames one painting, La Palabra y La Imagen (“The word and the image”), looming over a canvas dense with images: a steaming volcano, a snapping tree trunk, blowing winds, two faces in silhouette. Voltron, which was formed by five smaller robots, symbolizes unity and a community’s ability to be stronger than the sum of its parts, Rojas says. The overall effect is of a Mayan mural morphing into a comic book panel.

In another painting, Amor: the Perfect Lotus, the face of Alex Nieto, who was killed in 2014 by San Francisco police in a nearby neighborhood, is divided into quarters, each rendered in a different style, a charcoal sketch abutting a splash of Warholian color, above a cartoonish minimalism. Rojas also coordinated a special broadside—published by El Tecolote, a bilingual newspaper now produced by Acción Latina, where the exhibit took place—which included poems from 17 local writers. For Rojas, art and community are intertwined.