Good cop, bad cop, superhero. Michael Chiklis discusses how he reinvented himself to stay on top in a fickle business and dishes on his new show, Coyote

Originally published in the Fall 2020 issue of CFA magazine. By Mara Sassoon. Photos by Patrick Strattner

In the 2002 pilot episode of the hit FX series The Shield, the show’s merciless and corrupt protagonist, Los Angeles Police Department detective Vic Mackey, played by Michael Chiklis, brutally beats a suspect and murders a fellow officer in cold blood—and it only gets worse from there. For the rest of the show’s seven seasons, Mackey displays increasingly disturbing and illegal behavior: torturing and killing suspects, stealing evidence, embezzling money. Not only did the events of that first episode make it onto Rolling Stone’s “The Shocking 16: TV’s Most Heart-stopping Moments,” but Entertainment Weekly also named Mackey one of its “16 Ultimate TV Antiheroes.”

It’s a role Chiklis (CFA’85) played with compelling, can’t-look-away grit and one that earned him critical acclaim—he won a 2002 Emmy Award for Outstanding Lead Actor in a Drama Series and a 2003 Golden Globe Award for Best Actor – Television Series Drama. And he’s bringing a similar captivating performance to his starring role in the upcoming series Coyote. But before he got to the A-list, Chiklis had plenty of time out of the limelight, working in a host of small theaters, waiting a lot of tables, and even starring in a movie so controversial he thought he’d never act again.

“My parents used to tell me that I announced when I was five years old that I was going to be an actor,” Chiklis says. Growing up in Andover, Mass., he recalls watching The ABC Comedy Hour, which featured a group of comedic impressionists called The Kopykats that included the actors Frank Gorshin and Rich Little. Chiklis would walk around “imitating those two guys imitating other people” and make people laugh. “I think it was that response that made me feel like acting was my calling.”

That calling became a little more real during the ninth grade, when Chiklis starred as Hawkeye Pierce in his school’s stage production of M*A*S*H. “It was pretty racy for a high school play,” he says. His turn as the chief surgeon caught the attention of a casting director from a local summer stock theater, landing him a spot in a production of Bye Bye Birdie. The production’s director, Mark Kaufman, would become Chiklis’ first theatrical mentor. When Kaufman cofounded the Merrimack Repertory Theatre in Lowell, he cast Chiklis in a production of Romeo and Juliet during its first season.

“I gained incredible insight from watching Mark open a regional theater, from inception to fruition,” Chiklis says. “Seeing that process and getting to be onstage so much, it solidified my love for the theater and acting.” Kaufman also encouraged him to apply to Boston University’s theater program. It was the only school Chiklis applied to. “Now, I think to myself, ‘Oh my God, what if I didn’t get in?’ I don’t know what I was thinking.” 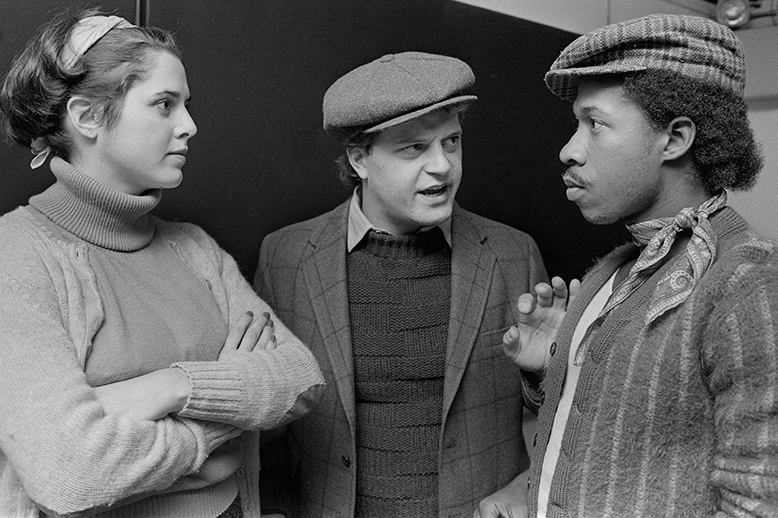 Chiklis at a rehearsal for a 1984 BU mainstage production of The Hostage. Rehearsals, he says, “were where I learned the most.” BU Photography

Chiklis attributes much of his success to the guidance he had as a young actor from people like Kaufman and—at CFA—the late Jim Spruill, who was an associate professor of theater. “Good mentorship can completely change the outcome in a person’s life,” Chiklis says. That kind of mentorship, he believes, extends far beyond acting advice. During his freshman year, he was blindsided by the news that his parents were divorcing. “My family broke. It really cracked my foundation and sent me into a kind of a spiral.” His grades and performances started to suffer and Spruill took notice. “He knew I was a good student, that I loved the craft. But all of a sudden, I was aimless and unfocused. He cared enough to say, ‘What’s up with you? What’s happening?’ He nurtured me through it. He cared enough to just ask a couple of questions.”

While Chiklis fondly recalls performing in shows like On the Razzle at the Huntington Theatre Company, which BU had established during his freshman year, he loved the rehearsals more than anything. “They were where I learned the most. At rehearsals, we were exchanging ideas—students from all over the country, from every race, creed, and walk of life. The truth is, we would go at it. Everyone was super opinionated and we discussed and argued about the shows.

“BU just opened my mind to so many things, so many people. It made me think, ‘Wow, there’s just so much to know.’”

Read the full article in CFA