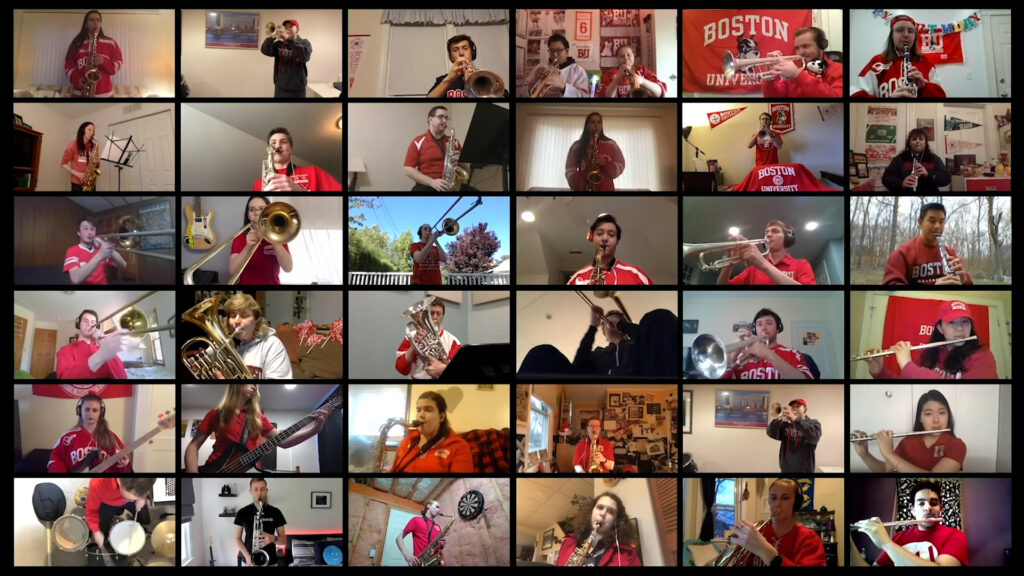 Doug Darrah (CAS’20) sat in front of his computer with his tuba, troubleshooting video for a homemade tutorial. Darrah is a member of Boston University’s Pep Band— the group of 120 musicians responsible for the famous Terrier fight song “Go BU.”

In the wake of the global virus that has forced students from campus and quartered musicians in their homes, Darrah and Athletic Bands Director Aaron Goldberg were determined to find a way to bring the BU community together, even from a distance. Darrah’s tutorial was sent out to nearly half of the band, along with a recording of the fight song and instructions on how to participate in the virtual performance of “Go BU.”

“Besides giving the students a chance to play together, I also wanted to help,” says Darrah. “I figured that if alumni and other members of the BU community see us playing together then it might give a sense of normalcy.”

Having started playing trumpet in the fifth grade, before switching to bass trombone and eventually tuba, Darrah has always valued the experiences and community band has given him. The virtual performances of the New York Philharmonic and the Carolina Crown Drum Corps inspired Darrah to continue making music, even with band members scattered around the country.

The Pep Band, one of BU Bands’ University-wide ensembles, is 120 students strong, though not everyone currently has access to their instruments. Still, 60 people armed with an age-old memorization of the fight song signed up to participate in Darrah’s virtual undertaking.

The BU Pep Band ensemble operates in “high-demand” says Goldberg, the Band’s director. They average about 125 performances per year, 100 of which are done on campus to support almost every University organization that exists.

Goldberg was thrilled when Darrah pitched his idea to go virtual. “I knew that the Band, while interacting with each other online and staying in touch as best as possible during this time of remote learning, was really aching to play together again,” Goldberg says. “Playing music that is full of energy and spirit is what we do!”

Though the Pep Band’s end-of-the-year festivities have fallen victim to the social distancing demanded by COVID-19, Darrah, a senior nonetheless, remains optimistic. He was responsible for gathering together the band’s individual video recordings to create the final product.

“Even in these trying times, the band can keep playing together,” Darrah says, “and I think that can be a very powerful statement.”

Cheer on BU and sing along to the virtual fight song! Check out the video here:

BU Bands is known as the soundtrack of Boston University. Members of the BU Bands program represent every undergraduate school and college on Boston University’s campus. All ensembles provide fun and exciting ways for non-music majors and music majors alike to have the band experience while pursuing degrees in their disciplines. The BU Bands program performs for over 200,000 people at more than 150 events each year. In addition to performances on campus, some ensembles travel often for shows, competitions, tournaments, and concerts. Learn more at bu.edu/bands.