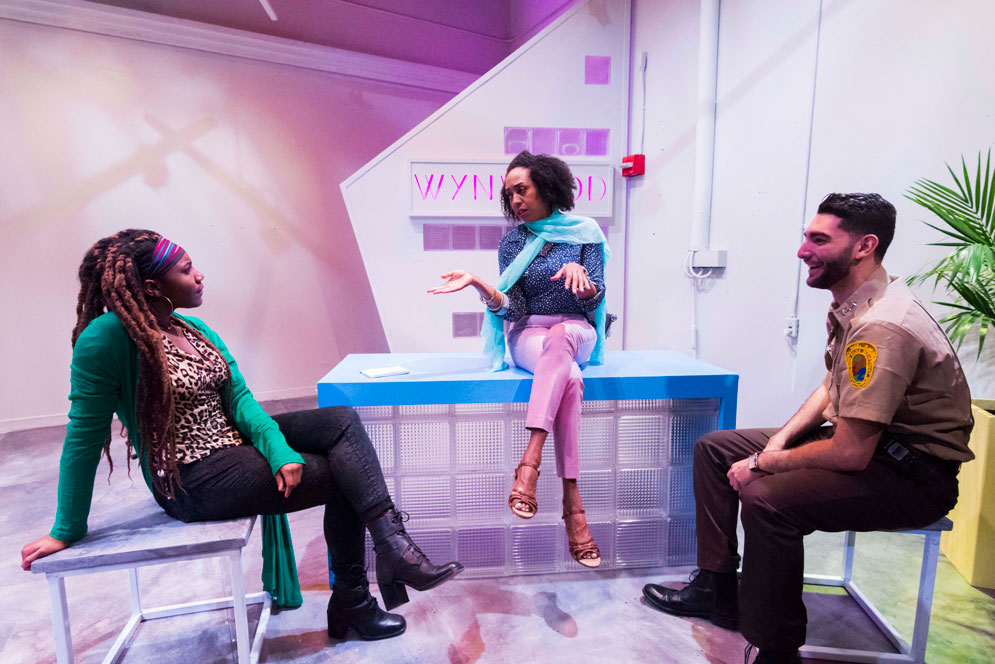 This article was originally published in BU Today on February 21, 2019. By Joel Brown.

The two plays are wildly different in both style and substance, but both are set in today’s Miami and both focus on young Latinx women. That’s no accident, says playwright Alexis Scheer, the third-year MFA student who wrote both of them.

“I’m learning the common thread in all of my plays is Latinas in charge,” she says.

In Our Dear Dead Drug Lord, a clique of teenage girls huddle in a treehouse, arguing with terrifying intensity about sex and death and pregnancy…and oh, by the way, trying to summon the spirit of the late Colombian drug-cartel kingpin Pablo Escobar.

In Laughs in Spanish, a Colombian-Jewish gallery owner in a hipster neighborhood deals with a catastrophic art theft with the help of her movie-star mother and a laconic cop, all exchanging spicy multicultural zingers along the way.

Both plays were written by Scheer, a student in the playwriting program run by the Graduate School of Arts & Sciences in collaboration with the College of Fine Arts. Drug Lord played at a small Boston theater last year and got Scheer noticed. Laughs in Spanish opens Thursday at Boston Playwrights’ Theatre (BPT).

The surreal, spooky Drug Lord was produced by Scheer’s own Off the Grid Theatre Company. It helped her land an agent and be named the Improper Bostonian Rising Theatre Star of 2018. The play appears to be headed toward a New York production next season, but Scheer, who’s also just wrapping up a stint as an artistic apprentice at the Huntington Theatre Company, cannot talk about that yet. (“Nothing is signed, it’s still being negotiated, but it looks really good,” she says with a grin.)

Laughs in Spanish, directed by Sara Katzoff, a second year College of Fine Arts MFA directing student, is a comedy set in Wynwood, the uber-hip Miami arts district carved out of an old warehouse neighborhood. (The play’s original title was Wynwood.) Krystal Hernandez plays Mariana, a gallery owner facing an opening-night disaster when she arrives that morning to find all the artwork missing. Second problem: the unexpected arrival of her mother, Estella, a Colombian movie star and a piece of work herself. Estella is played by Jackie Davis, a BPT veteran and founding artistic director of New Urban Theatre Laboratory.

Also on hand, and not as much help as they ought to be, are: Carolina, a painter who works for Mariana, played by sophomore Ireon Roach (CFA); Carolina’s boyfriend, Juan (Adrian Abel Amador), who’s a cop; and Mariana’s assistant Jenny, a white girl from LA, played by senior Madison Findling (CFA).