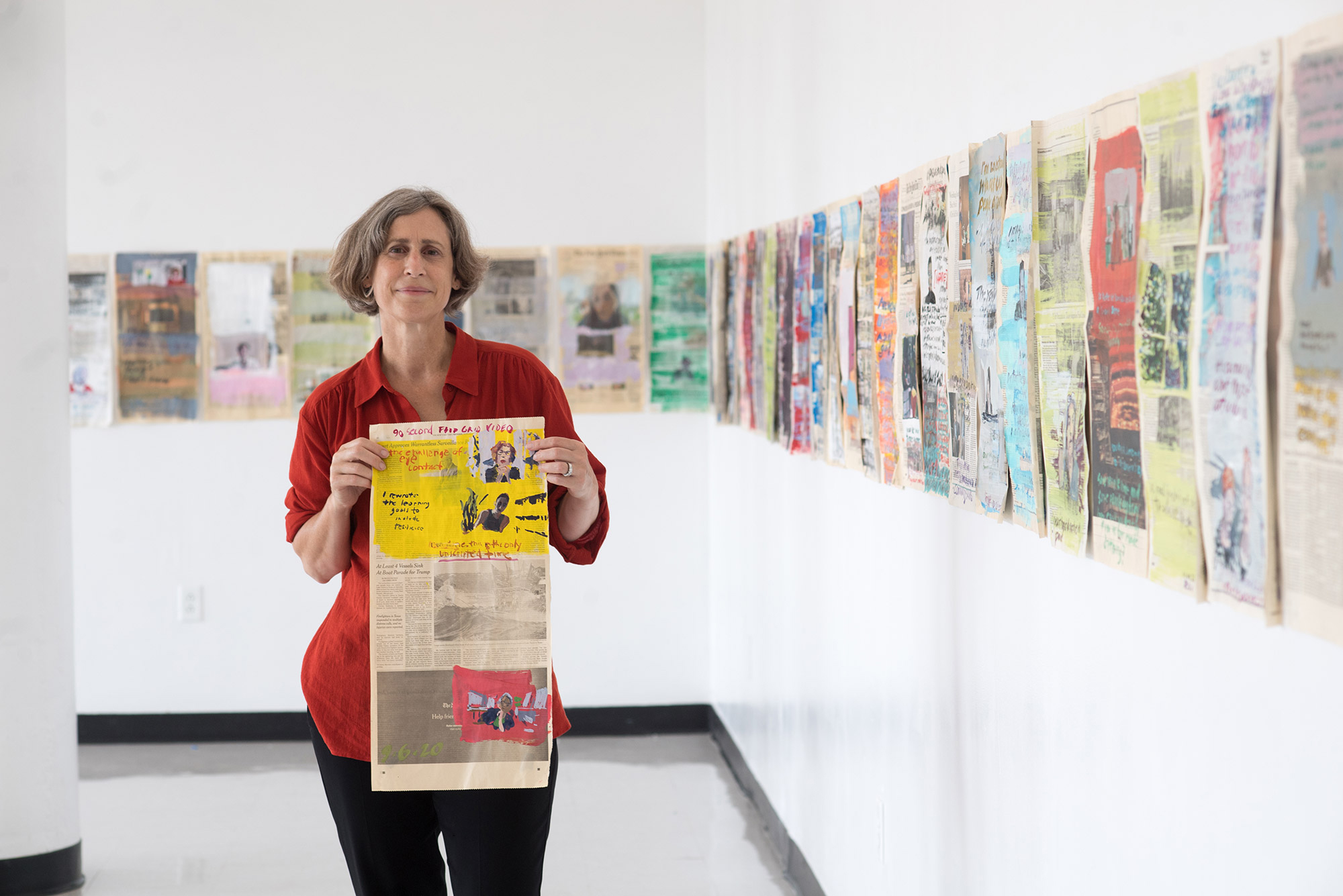 This article was first published in BU Today on July 21, 2021. By Joel Brown

People pick up the Sunday New York Times to read the front page or the “Book Review,” to mock the glitzy wedding announcements or tackle the crossword. But over the last year of pandemic and political tumult, Dana Clancy has been picking it up looking for pages to paint on.

“I paint only on the Sunday New York Times, keeping or covering the news as the week unwinds in unexpected, often shocking ways,” says Clancy (CFA’99), the director of the College of Fine Arts School of Visual Arts and an associate professor of art. She paints over part or all of each chosen page with blocks of color, adds portraits of people she’s Zooming with, then adds words, usually things those people have said. “Words written over weeks feel like a shared public space—the kind of space I’m missing and want for all of us,” she says.

Begun in September 2020 and now planned to last a year, the project has the working title Breaking News/Broken Year.

It is also, in a way, part of her preparation for the September 2022 launch of a new CFA Master of Fine Arts program in Visual Narrative, which will integrate fine arts with sequential art storytelling practices, both written and visual. The first year will focus entirely on nonfiction, but in the second year, students’ thesis projects could be nonfiction, perhaps from a collaboration with the BU Center for Antiracist Research or the School of Medicine, or fiction, from a animation informed by a required motion graphics course to a graphic novel like Alison Bechdel’s 2006 best seller Fun Home.

“In recent years, CFA alumni have become leaders in visual narrative—from the Oscar-winning producer responsible for Frozen to artists whose medical illustrations reveal the truth of crime scenes,” says Harvey Young, dean of CFA. “This new program supports the ambitions of smart, talented, creative artists and mentors them along a variety of possible pathways: animated storytelling, graphic novels, medical humanities, and more.”

Students have been asking for this, Clancy says. “Sometimes they called it illustration, sometimes they called it digital drawing.” When she visited the Serious Comics class taught by Davida Pines, a College of General Studies associate professor and chair of rhetoric, narrative was a big part of the discussion. She planned  the new degree in collaboration with Young, SVA faculty, and others, notably Paul Karasik and Joel Christian Gill. Karasik, a CFA lecturer, has published cartoons in The New Yorker and is best known as cocreator, with David Mazzuchelli, of the lauded graphic novel adaptation of Paul Auster’s novel City of Glass. Gill (CFA’04) an acclaimed cartoonist, author, and associate professor of illustration at Massachusetts College of Art and Design, is working on a graphic novel adaptation of the best seller Stamped from the Beginning by Ibram X. Kendi, BU’s Andrew W. Mellon Professor in the Humanities and founding director of the Center for Antiracist Research.

More than a year out from the first classes, there’s already a lot to do, including recruiting students (applications are due in January) and hiring an associate professor to oversee the program (interviews will be held this fall). The multiyear process has already included passing muster with accreditors and the University.

“It was an organic thing. Students were looking for it. We wanted to look for some degrees that would connect our existing programs,” Clancy says. “And these leaders in the field said, hey, let’s talk about comics in narrative format as being a powerful way to tell marginalized stories and stories of conflict.

“I think we really saw over this last year how narrative can spur people to action, whether it’s awful action or really important action,” she says. “The role of narrative and visual narrative feels more and more important.”