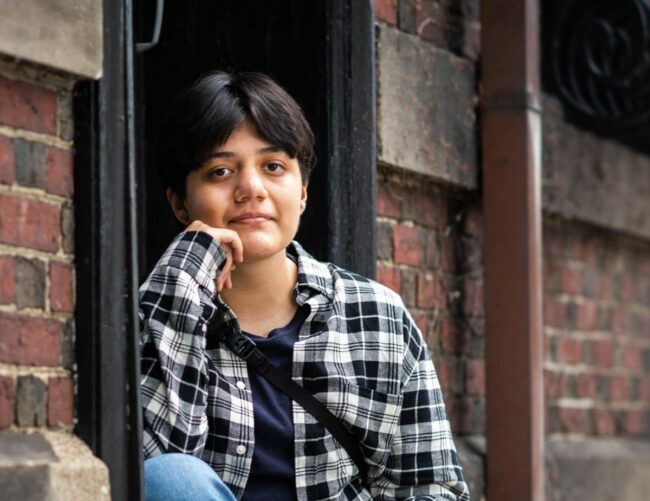 This article was first published in BU Today on September 8, 2021. By Alene Bouranova (COM’16)

Browsing his portfolio, you’ll see they figure prominently in much of his work. They’re painted in sunset hues, peering over mountainscapes, and gazing out from between centipedes and lilies—and occasionally, even his lilies have eyeballs.

Why all the extraterrestrials? “When I first started drawing them, I didn’t think anything of it,” says Vasquez (CFA’25), who identifies as queer and Latinx and uses he/they pronouns. “But looking back, I think it represents how I felt like an outsider, [being queer] and being ostracized.”

Vasquez’s coming-out experience wasn’t exactly warm and fuzzy. Art has long been his refuge and a means of self-expression—not to mention an opportunity to find and build a community he hadn’t had elsewhere. And now, as he embarks on a degree in arts education at the College of Fine Arts, he hopes to make a career out of art.

But let’s take it back a little bit.

By his own admission, the Chicago native was always a shy kid. By his sophomore year of high school he felt isolated, unable to express who he actually was, except in his paintings. Unfortunately, his school lacked the funding for creative programming, so he couldn’t continue with art classes, and all of the local youth programs were too expensive and too far from his home on the city’s South Side. At the time, he says, he considered quitting art altogether.

That changed after Vasquez got involved with Yollocalli, a free youth initiative run by Chicago’s National Museum of Mexican Art. Yollocalli—a name that combines the words “heart” and “house” in the Aztec language Nahuatl—is a little bit of everything: it’s a community center, art and radio studio, and social justice hub geared to local teens. Once he joined and connected with other artsy Latinx students and professionals, he knew he’d found a home.

“I never thought of myself as a creator until I joined Yollocalli,” says Vasquez, who worked with other creative people involved with the organization to paint murals, design installations for the museum, and teach art classes, among other things. “They’re the reason I want to be an art educator.” 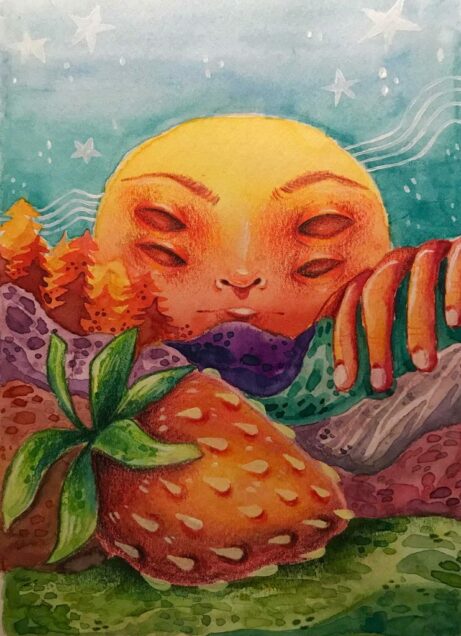 A common subject in Vasquez’s work? Aliens. This one is titled, The Only One Who Says Hello. Image courtesy of Ash Vasquez