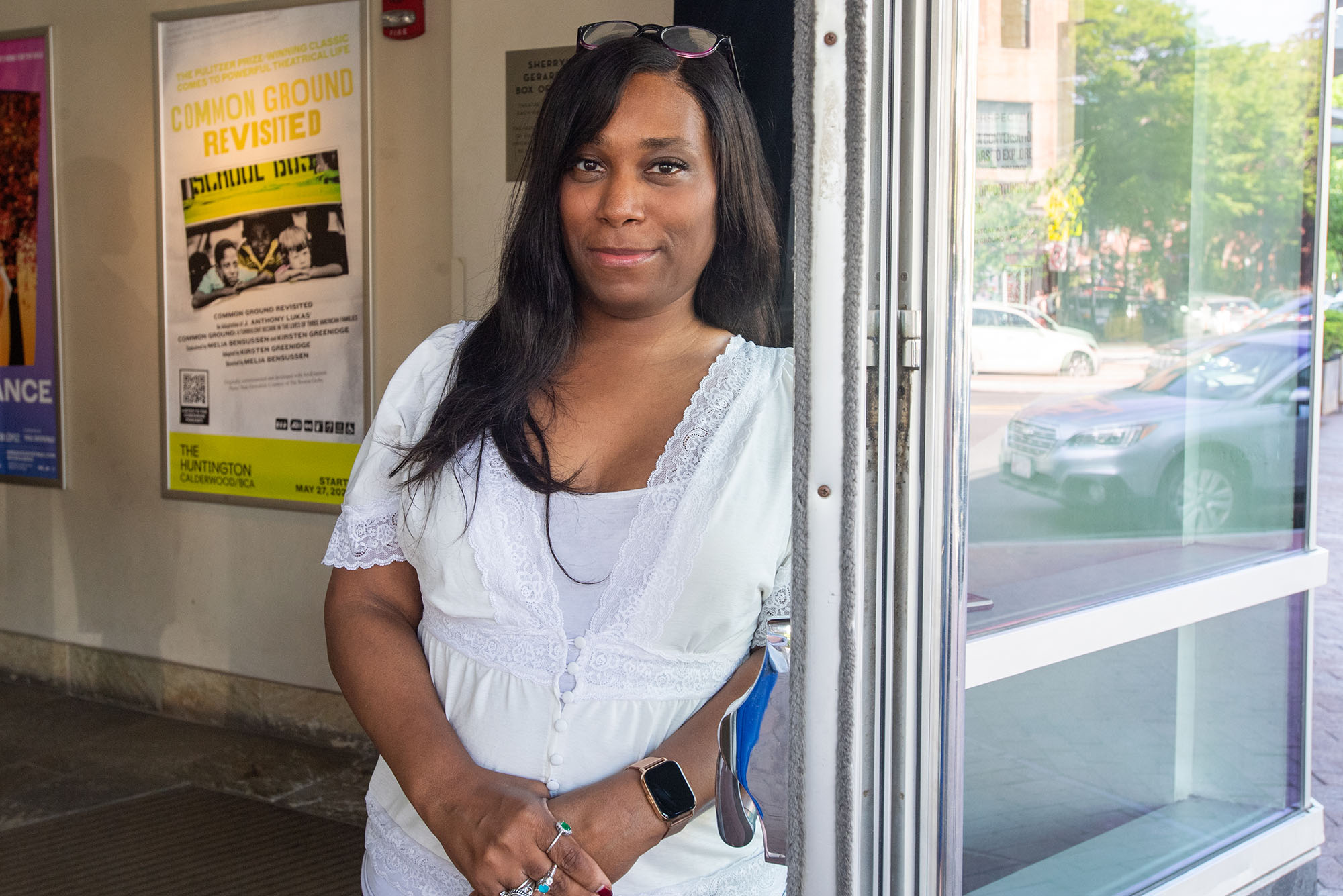 Can the Play Common Ground Revisited, about Boston’s Busing Crisis, Reach 21st-Century Audiences Like the 1985 Book?

…BU dramatist Kirsten Greenidge is daring us to find out

This article was first published in BU Today on June 13, 2022. By Sara Rimer

In his acclaimed 1985 book, Common Ground: A Turbulent Decade in the Lives of Three American Families, Pulitzer Prize–winning journalist Anthony Lukas chronicles Boston’s battle over court-ordered busing to desegregate schools. It’s a portrait of a city, and a nation. “To say that Common Ground is about busing in Boston is a bit like saying Moby Dick is about whaling in New Bedford,” Robert B. Parker (GRS’57,’71) wrote in the Chicago Tribune.

Greenidge, who the Boston Globe calls “one of the city’s leading dramatists,” has written and produced a dozen plays, among them The Luck of the Irish, which was premiered by the Huntington Theatre Company in 2012 and was directed by Bensussen. Greenidge’s play Our Daughters, Like Pillars finished its Huntington run at the Boston Center for the Arts (BCA) in early May 2022.

Greenidge and Bensussen have both won Obie awards for their work. Their new play, Common Ground Revisited, was years in the making. Greenidge says what began as a script aimed mostly at dramatizing the facts in Lukas’ book evolved over many workshopping sessions into something riskier: a play that’s based on those facts, but reimagines how some of the key characters might have crossed paths and makes use of cast members’ 21st-century racial experiences. Six of the actors are Black; six are white.

Lukas built his book around painstaking research on the Irish-American working-class McGoff family, the Black working-class Twymons, and the Yankee Divers—and how they experienced the battle over busing. Greenidge and Bensussen were able to tap unpublished material in the myriad interviews and notes for Common Ground that Lukas left behind. The acclaimed author and journalist, who struggled with depression, died by suicide in 1997, at age 64. His widow, Linda Healy, gave the playwriting team access to his papers.

“We’re holding up a mirror to this city and to this moment,” Bensussen told the Globe. “We are using this brilliant work of history as a point of discussion, of conversation.”

Common Ground Revisited was days away from its Huntington Theatre Company opening at the BCA’s Calderwood Pavilion—an event delayed for a year by the pandemic—when BU Today talked with Greenidge.

BU Today: Can you talk about how this project evolved for you and Melia Bensussen?

Greenidge: Melia began this journey 10 years ago when she was in conversation with Rob Orchard [then Cambridge’s American Repertory Theater managing director, now retired from ArtsEmerson]. Rob loves this book and wanted to see if anyone wanted to adapt it. Melia said, “I would love to adapt it. However, I want to make sure we’re not deconstructing the book, but talking about how it fits into our culture now as opposed to just a straight up adaptation.” And we were also beginning work on Luck of the Irish here at the Huntington, which deals with some of the same themes. Another theater company had approached me to adapt it [Common Ground] about 15 years ago. So Melia invited me to adapt the book with her.

But the first thing we did was we worked on a class together at Emerson, an adaptation class that looked at the book, and had the students develop the pieces. It was really a wonderful semester, examining the book. And at that point some of the key players in Common Ground were still alive. And so the students interviewed some of them, and they interviewed people who lived in the three neighborhoods.

BU Today: Do you think a lot about how Boston has changed since that time?

Greenidge: I do, because there are so many different lenses: of who tells history, who speaks history, who researches it, and whose work gets honored. And that has shifted since 1985 and ’86. So there are other voices, other movements connected to desegregation in Boston and in the busing crisis, other authors who have written since then. This book has touched so many people, and it’s so wide and sweeping, and it reads like a novel even though it is not. I’m really beginning to appreciate not just Lukas’ work, but also the work of the people who came after, that this book might have inspired—whether they were really enamored with the book or it made them angry and they had something to say to the book.

I grew up in the shadow of busing. I was four when I said something really wrong to my mom, like, “Oh, St. Patrick’s Day is coming up. Should we go to the St. Patrick’s Day Parade?” And she said, “No.” And I was like, “What!? Why not?” I had no idea. I did not understand my mom’s trepidation at venturing into South Boston for the parade, or to Charlestown for Bunker Hill Day.

And that’s when she began to explain to me a little more about the history and how sheltered in some ways we were able to be. I remember that conversation—her discussing Boston neighborhoods, how they differ a little bit from each other, and the way those neighborhoods are divided. And I remember thinking, oh, OK, I think I understand a bit more. So when I read the book, I was just like, oh, I understand.