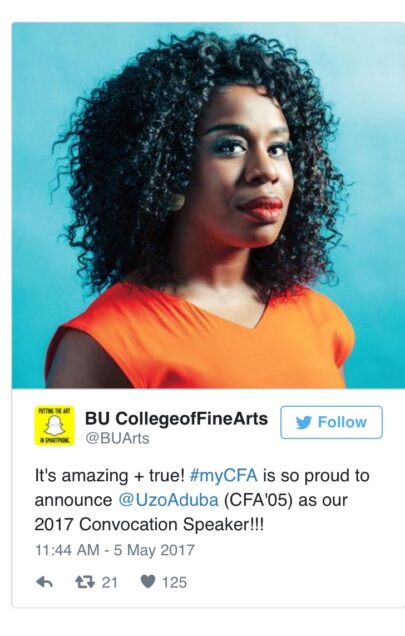 Boston, MA – The College of Fine Arts (CFA) at Boston University proudly announces that Uzo Aduba (CFA’05), the award-winning actress currently starring as Suzanne “Crazy Eyes” Warren in the critically-acclaimed Netflix Original Series ORANGE IS THE NEW BLACK, has been named the speaker for the 2017 CFA Convocation. The College of Fine Arts Convocation is on Saturday, May 20th, at 4pm at the Boston University Track and Tennis Center.

Aduba attended Boston University on an athletic scholarship for track and is a graduate of BU College of Fine Arts School of Music with a BM in Voice Performance. Her accomplishments at BU extended from the field to the stage where she worked closely with School of Theatre. She was nominated for a Helen Hayes Award for Best Supporting Actress in a Play for her work in the Kennedy Center/Olney Theater production of TRANSLATIONS OF XHOSA, a production that had been originally workshopped at CFA. Aduba returned to Boston University in 2015 to be honored as a recipient of the College’s Inspiring Young Alumni Award.

“Uzo is one of those alumni who is so enthusiastic about Boston University and the College of Fine Arts and her time here that her genuine exuberance in expressing it is infectious,” says Lynne Allen, Dean ad interim of Boston University College of Fine Arts. “She attributes much of her success to her family, to BU, and her time here on the stage and on the track field. Her message is one of hope, drive, and resilience. We continue to be inspired by Uzo, and are so proud to call her our alumna and friend.”

With work that spans television, film and theatre, Aduba’s performance has garnered a sweep of awards including the 2016 and 2015 SAG Award for “Best Actress in Comedy,” the 2017 SAG Award nomination for “Best Actress in a Comedy,” the 201 5 Emmy Award for “Outstanding Supporting Actress in a Drama Series” and the 2014 Emmy Award for “Outstanding Guest Actress in a Comedy.” For her Emmy wins, Aduba joined Ed Asner to become only the second actor ever to win Emmys for the same role in the comedy and drama categories. Furthermore, with her SAG and Emmy honors, she became the first African American actress to win the award in each category.

In film, Aduba will next be seen in Lionsgate and Hasbro’s “My Little Pony” alongside Emily Blunt, Zoe Saldana, Liev Schreiber, Kristin Chenoweth, Taye Diggs and Sia. She was recently seen in Ewan McGregor’s AMERICAN PASTORAL alongside McGregor, Jennifer Connelly, and Dakota Fanning. The drama is based on the Pulitzer Prize-winning novel written by Philip Roth. Additionally, she recently appeared alongside Ellen Page and Allison Janey in Sian Heder’s TALLULAH, which was premiered on Netflix in July 2016 after premiering at the 2016 Sundance Film Festival.

Aduba made her television debut in 2012 on the hit CBS show BLUE BLOODS.

Before starring on television, Aduba made her Broadway debut in CORAM BOY in 2007 followed by the hit musical revival of GODSPELL in 2011. She discovered her talent for singing at a very early age and became a classical music major at the Boston University School of Fine Arts. Work in theatre quickly followed with critically acclaimed performances at both The Huntington Theatre in Boston and A.R.T. where, under the direction of Dianne Paulus, she won the prestigious Elliot Norton Award for Best Actress in a Play. She recently made her West End Theatre debut in The Jamie Lloyd Company’s contemporary adaptation of Jean Genet’s THE MAIDS. Directed by Lloyd, the play which also starred Laura Carmichael and Zawe Ashton.