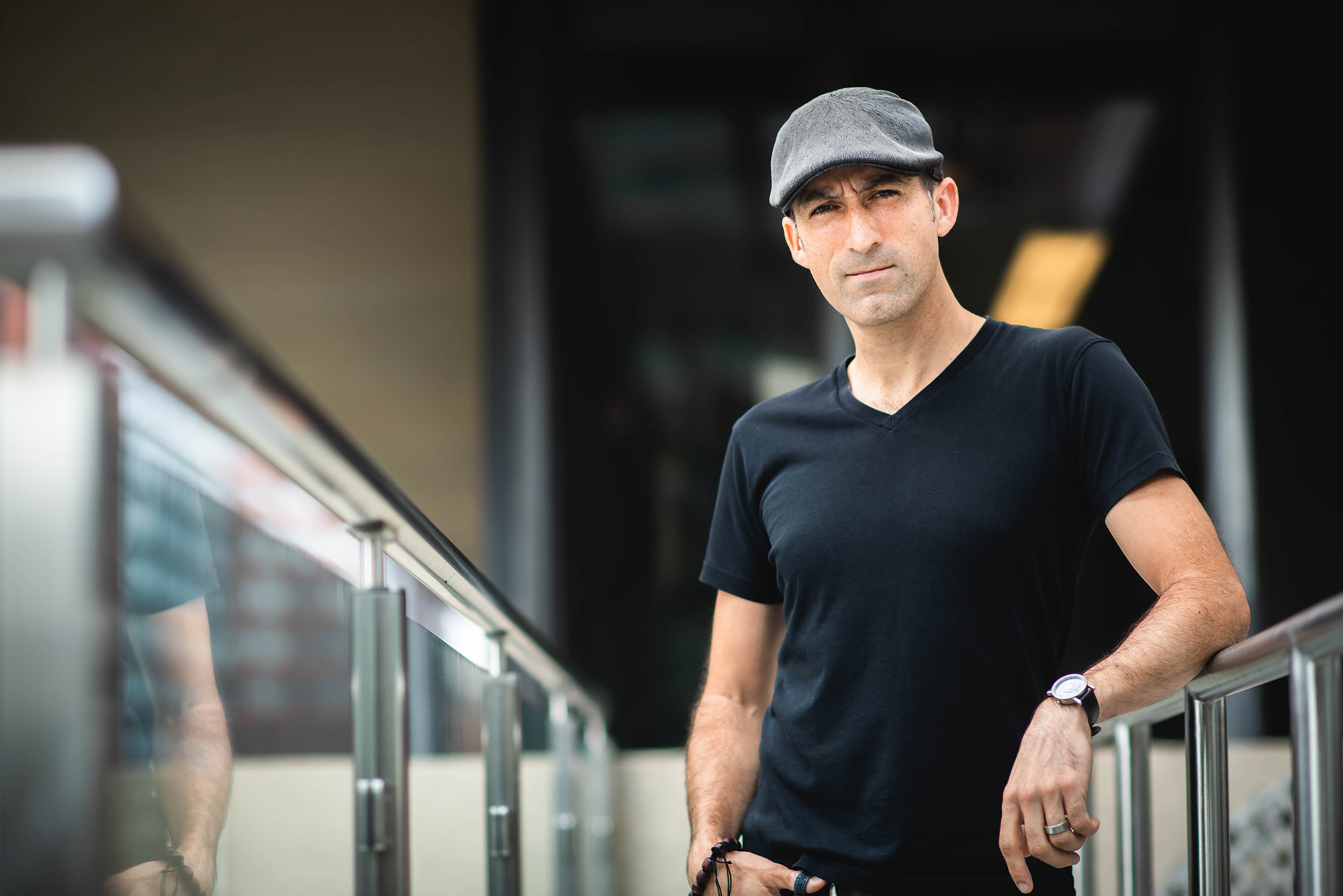 This article was first published in BU Today/Bostonia on October 9, 2021. By Joel Brown. Photos by Jackie Riccardi

David Delmar Sentíes is founder and executive director of Resilient Coders, which trains people of color from low-income backgrounds for high-growth careers as software engineers and connects them with apprenticeships. Students aged 18 to 30 pay nothing, receiving a small stipend to spend 20 weeks learning programming principles through JavaScript; they go on to work as full-time software engineers for companies as big as Wayfair, Constant Contact, athenahealth, and Humana, as well as numerous start-ups. The only request is that they help pull others through the door after them.

A Syracuse native, Delmar Sentíes (CFA’06) is a professional designer and interface developer. Before founding Resilient Coders, he was at PayPal, leading a team that designed and built first-to-market digital advertising concepts for brands like Starbucks, Coca-Cola, FedEx, and Pepsi. He has a book coming out, Power and Resistance (Beacon Press, 2023), about creating a culture of economic justice in tech.

Bostonia sat down with him at his organization’s Kendall Square headquarters in Cambridge to find out how and why he founded Resilient Coders and what’s next for the organization.

Bostonia: How did you get from the College of Fine Arts to running this nonprofit?

David Delmar Sentíes: I’m Latino, I grew up in a Spanish-speaking home. My parents immigrated from Mexico, and I was born here. I was able to go to BU, fortunately enough, to CFA, the School of Visual Arts, which was awesome. Plan A was to be a comic-book illustrator. Batman was my superhero favorite. Obviously, later on I fell in love with indie comics. I still make a lot of art.

Then I graduated and needed to pay the rent. I just wanted a job in design, and everybody was like, “Cool that you can design this, but can you also code?” I was like, no. And finally I kind of exaggerated—by which I mean, made up—my skills. I didn’t really know much when I got my first job. They took a chance on me, and I, frankly, taught myself on the job. It was eminently self-teachable. And I realized that we should be teaching more people.

Fast forward a few years, and I found myself working in the tech start-up world, which I really love. But you look around you and it’s like, “Where’s mi gente [my people]?” I became very frustrated by that. I wasn’t sure at first what I could do about that, but I knew at the very least that I could teach. And I believe in the idea of education as a liberating agent. And so I started volunteering, spending down my vacation days at a youth detention facility in Roslindale, the Judge John J. Connelly Youth Center. I volunteered down there with a bunch of boys and realized that I really needed to grow it.

I’m loud. I was able to talk about the injustices these young men experienced, and pull together enough resources and funding to start Resilient Coders, with some early funding from the tech community and the Boston Police Department.

Did you, personally, ever feel a door was not open to you because of your background?

I don’t think so. In this country we tend to think of Latinx as a race, and it’s really not. It’s a whole collection of races, nationalities, people. And I happen to be white Latinx. People often don’t even know I’m Latino unless I tell them. So whenever I’ve sat down in front of a college admissions officer, a loan officer, an actual police officer, they’ve only ever seen a white boy. This discovery of “where’s mi gente?” was also a reckoning around my whiteness.

At first you worked with younger students?

The problem working with high school–age folks is that what everybody seems to care about is college matriculation. That’s a solution, but that’s not the solution. So what we needed to do was build a boot camp program that would allow people to leapfrog college.

And your program has grown…

In 2016 we launched the boot camp. It was short, only eight weeks long, because that was all we could afford. And it wasn’t good enough—I failed an entire group of students. The program wasn’t strong enough, and the employers weren’t there the way I expected them to be. So I decided to spend the next several years in start-up mode, in a state of progressively more intelligent failure. Over the years we have pushed and grown and expanded to the point that now we offer five months of direct instruction, plus additional effort put into supporting our alumni, both on and off the job.

I’m proud to say we do this pretty well now. Every single one of our graduates in December 2020, all of them, have jobs—16 or 17 folks. We decided to make it small for the back half of 2020 because of [COVID] lockdown, but employers came back in force. They are making good money. The average starting salary for that cohort is in the $90,000s. So we’re pretty good at it now. So we’re scaling up. We’re operating in Boston, Philly, and Pittsburgh, and thinking about who we are and why we are.