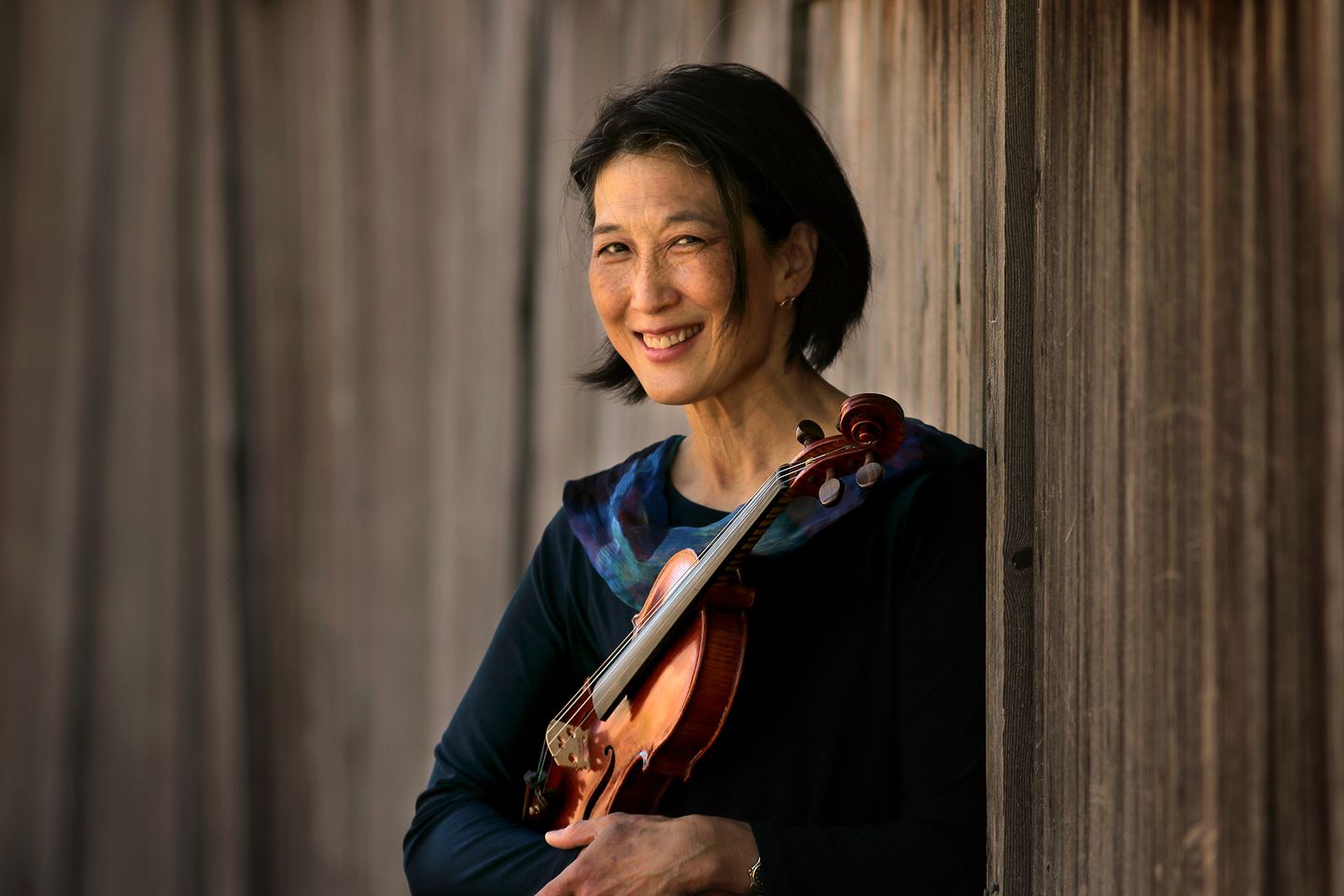 BSO violinist and CFA professor Lucia Lin initially set out to create a pandemic project. Her “In Tandem” series evolved into something much more. LANE TURNER/GLOBE STAFF

This article was originally published in The Boston Globe on April 9, 2021. By A.Z. Madonna

At first, Boston Symphony Orchestra violinist and CFA Professor of Music Lucia Lin didn’t intend to make a statement about diversity or inclusion when she struck upon the idea for her “In Tandem” duet series. Rather, Lin was simply looking for ways to stay active and engaged as an artist. Like many musicians, Lin saw her work dry up completely at the start of the pandemic.

“It made me aware of how fragile our economic world was,” she said recently. “It was scary.”

A longtime friend, composer Gabriela Lena Frank, suggested commissioning a few composers who were in the same predicament. Lin ran with the idea, setting out to fund and perform the pieces entirely on her own (not under the auspices of the BSO).

Lin, who is also a professor at Boston University, started off by listening to composers who had studied at the Creative Academy of Music — a creative incubator based on Frank’s Northern California farm. “The main requirement [for the Academy] is really having heart,” Lin explained. “They don’t need a degree or to have had their pieces performed by organizations.”

Only after choosing 10 composers did Lin realize the field was much more inclusive in terms of race, gender, and musical tradition than the repertoire Lin typically played — that is, the repertoire most American symphony orchestras play. “I have to give credit to Gabi for that,” Lin said, “because she really opened her Academy to all voices.”

Each composer was commissioned to write a duet for Lin and one other instrumentalist — composer’s choice. Two elected to perform with Lin themselves. For the other works, Lin collaborated with a handful of local musicians. She also decided to record an interview with each composer, posted on Lin’s personal site along with the performances. The project kicked off in January with Michael-Thomas Foumai’s “Printing Kapa” duo for violin and harp. Lin plans to post more performances and interviews through the end of spring.

Reached via phone at her home in Brookline, Lin explained how the duet series evolved from a pandemic project into something much more.

Q. You said you looked at the composers after you chose them and realized they were diverse. In picking musicians to duet with, did you consciously try to break stereotypes for certain instruments?

A. Two of the composers chose percussion, and I thought OK, when people think of percussion, they usually think of a white male. Then someone mentioned Maria [Finkelmeier], and I was really impressed by what she’s done, so I approached her, and she said she would come onboard. Charles Overton also breaks the barriers of who people think a harp player is. It made me think of [former BSO principal harpist] Ann Hobson Pilot, when she started learning the harp and someone said to her, “There are no Black harpists.”

It’s been really an interesting journey, creating this project. In the beginning I just wanted to have these duos written. Then I decided, you know, part of the reason people are afraid of new music is they don’t understand it. What happens if people get to know the composers a little bit? That’s when I added the interview aspect. Nick Benavides spoke about the issues at the border; a lot of his work is inspired by issues he sees in the Southwest. Talking to Nicky Sohn, she once wrote a piece with an American jazz theme, and someone came up to her and said “Oh, I can really hear the Asian-ness in your piece.” [Laughs] Amazing, right?

Q. When did you realize the project had taken this new dimension of inclusivity and social justice?

A. I think when I was speaking to Gabi, and I said these are the 10 composers that I want to invite. She commented, “Wow, this is a really diverse group of voices and influences, and you should present it that way.” Then I wanted to focus on different social issues. We were focusing on the Black Lives Matter issue at the time [last summer], but the border issues continue, and they continue now even with the change in presidency. We have to keep the conversations going.

Q. Do you find the project offered opportunities you don’t get in your everyday professional life as a BSO violinist and BU faculty member?

A. In the orchestra world, we expect the composer to have a finished product when it hits our stands. It would be nice to be able to allow the composers flexibility to bring a piece and workshop with an orchestra. Also, being able to hear composers from different ethnic backgrounds. With Iman [Habibi], we experimented with microtones and harmonies that were from his Persian heritage. I’m hoping that this project will open eyes that classical music is not Eurocentric, that it encompasses a lot of different voices.

Q. Did you set up your website and blog during the pandemic?

A. Yes, I started my website because I needed a place to feature these premieres, and I wanted to have a place where people might be able to share thoughts with me. I’m learning a lot delving into how to help my students at BU, and even [addressing] my own misconceptions — thinking, for example, that there are a lot of Asian Americans in classical music. But I know there aren’t many Asian voices on the programs. We tend to forget that we have 50 ethnic groups lumped into “Asian,” and a lot of those groups haven’t had the advantage of access to lessons and classical music.

“In Tandem” is dedicated to bringing new voices to classical music, helping to break the barriers of color in classical music, as well as introducing the younger generation to music that relates to current social issues. Learn more at lucialin.com/in-tandem. Duets commissioned and performed by Lucia Lin. lucialin.com

Read the original article in The Boston Globe