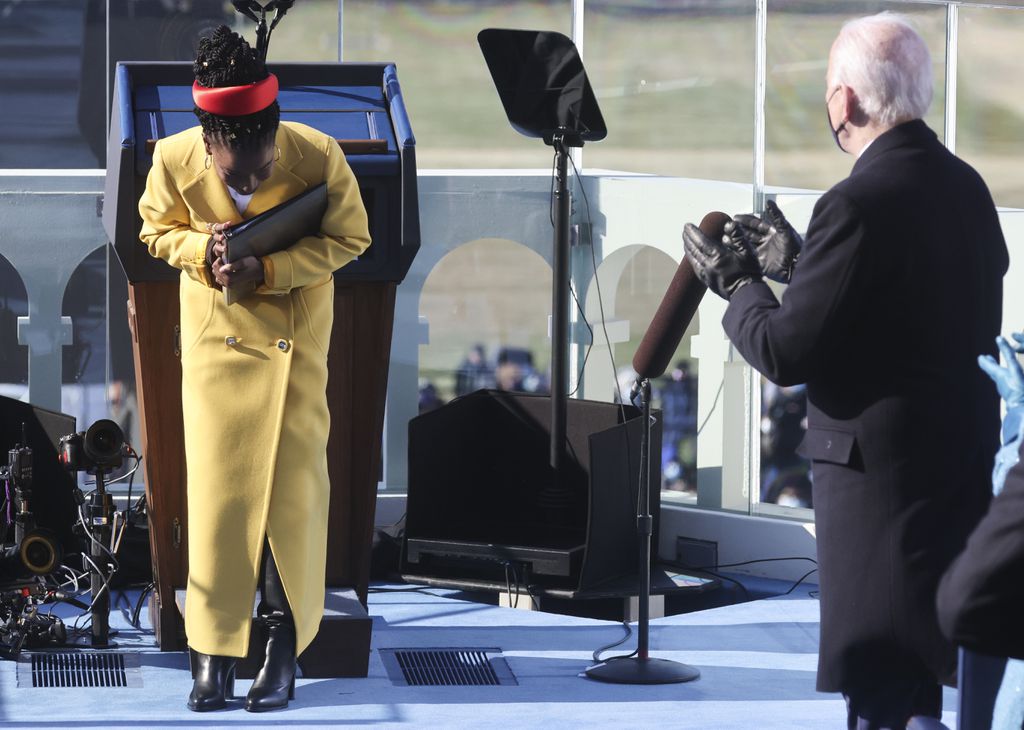 President Biden applauded Amanda Gorman after she recited her poem “The Hill We Climb” during the Jan. 20 inauguration at the US Capitol. JONATHAN ERNST/POOL PHOTO VIA AP

Dean Harvey Young shared his thoughts on how the new administration can support, sustain, and promote the arts in this Boston Globe article, which was originally published on February 4, 2021. By Dan Aucoin.

Excerpt from the article:

He may have titled his 1987 book “Trump: The Art of the Deal,” but there was never much evidence that Donald Trump valued the arts during his presidency, except as a convenient punching bag.

Even before he was inaugurated, Trump got into a Twitter spat with the cast of “Hamilton,” and for the ensuing four years the relationship between the former president and the cultural sector was defined by mutual antipathy.

Trump repeatedly tried to eliminate the National Endowment for the Arts and routinely skipped the Kennedy Center Honors. Of the two dozen recipients of the Presidential Medal of Freedom during his presidency, only one was a cultural figure: Elvis Presley, who is long dead (though there’s some dispute about that).

Now, after an inaugural day and night that amply showcased singers, actors, and a young poet, Joe Biden has assumed the presidency amid a desperate fight by arts organizations to survive the financial crisis brought on by the pandemic. What could it mean in this perilous moment to have someone in the Oval Office who views culture as essential and takes steps to address the specific nature of the challenges faced by the performing arts?

The short answer is: potentially everything.

“This is the real shift between Biden and Trump,” said Harvey Young, dean of the College of Fine Arts at Boston University and a prominent cultural historian. “What I anticipate we’ll see is a celebration of the importance and the power of the arts. I imagine it will go back to the way that Barack Obama and Michelle Obama welcomed the arts into the White House, to show it is the arts that defines who we are.”

Young admits, though, that it’s not 100 percent clear how deep Biden’s commitment to the arts goes. The depth of that commitment will be revealed in whether or not the new president takes concrete steps to aid in the recovery of the pandemic-battered cultural sector. One vital step, Young said, would be forgiveness of the federal Paycheck Protection Program loans to arts organizations, which would “allow them to survive.” Courtney O’Connor, artistic director of Lyric Stage Company of Boston, which received funds during the first round of PPP loans, agreed that loan forgiveness “would be so tremendously helpful” to theaters and other performing arts institutions that have been shuttered for nearly a year.

“The biggest challenge the arts are facing is the fact that their doors are closed,” said BU’s Young. “As vaccines roll out, there needs to be a strategy to reopen and reestablish the live performing arts. The biggest mistake the Biden administration could make would be delaying too long the reopening of arts organizations.”

While Young says he expects Biden to increase the budgets of the NEA and the National Endowment for the Humanities — a task that should be easier with Democratic control of both houses of Congress — he also hopes Biden will “follow the Marty Walsh playbook and appoint a Cabinet-level arts leader.” The Boston mayor, who is Biden’s pick for US labor secretary, elevated the position of arts and culture leader early in his tenure. Accelerated by the current crisis, sentiment has been building recently in the cultural sector nationwide for the creation of a similarly high-powered post in the federal government.