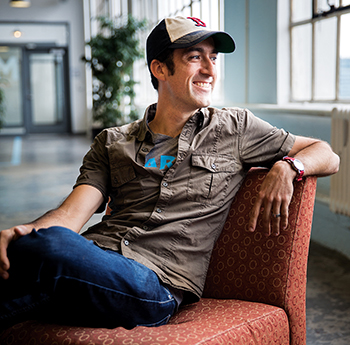 For the entrepreneurial-minded, Boston is a place of inspiration. As one BU alumnae, David Delmar puts it, “It’s a place where new ideas can take flight. It’s a big enough city to have a market, but it’s not New York, where the tracks have already been laid and greased.” Delmar, who graduated with a BFA in Graphic Design in 2006, is the Executive Director and Founder of Resilient Coders, a Boston-based organization devoted to diversifying technology, making the field more accessible to underserved populations.

Delmar had always viewed technology as a meritocracy, but when he began working at a large software company, he quickly saw that the field was predominately white and male. For some populations, opportunities to learn the skill were practically nonexistent, so he found a way to open the door. He created Resilient Coders to identify underrepresented groups, primarily women and low-income populations, and teach them how to code. His program rewards the brightest team players with a world of opportunities—hackathons, boot camps, stipends, apprenticeships, and job connections—all laid out on a newly leveled playing field.

To generate revenue, the organization takes on design and development projects for clients. It is here that Delmar puts his graphic design and English degrees to work. Whether he is creating a client website or branding his own company, he calls upon the design skills he learned at BU. “A big part of my job is storytelling,” he adds with a nod to his English minor. ”People respond to stories rather than numbers and metrics.”

It was fortuitous that Delmar landed in a city of innovation, but it was no accident that he has become a catalyst for it. Like so many BU students, he internalized the creative energy that surrounded him, and this momentum led him into his passion. After seeing the spirit of innovation in his city, in his University, in his professors, and his peers, he had to know that it was within him as well. Ignited by ambition, he got to work. Now he changes lives.