Originally published in the Spring 2021 issue of CFA magazine. By Andrew Thurston | Illustration by Celyn Brazier

If school bands have marched during the past year, it’s been at a distance—and with special shields covering trombone and trumpet bells. The coronavirus pandemic has upended music education in other ways, too, cutting some students off from their school-based instruments, denting orchestra recruitment, and forcing teachers to grapple with virtual rehearsals. Music educators, normally concerned about funding new instruments, are now worried about airborne particles and students without laptops.

“It’s been awful,” says Dana Monteiro, a music teacher at Harlem’s Frederick Douglass Academy. “I’ve been teaching in New York City for 20 years, and it’s like all of those other 19 years have nothing to do with this year.”

Some of Monteiro’s kids don’t have the technology—or the internet access—they need to join remote classes. Others have struggled by on cell phones. And it’s not like New York City, even in its toniest enclaves, is known for sprawling apartments. You can’t ask a student to start blasting tunes when their parents are working at the same kitchen table.

Rather than trying to re-create the classroom experience online, Monteiro (’16) has put his energy into sharing recordings of his playing—and encouraging his students to make their own.

“Then we can talk about the recordings back and forth, meeting one-on-one or in small groups.”

Monteiro can’t wait to get back into the classroom—he even misses walking the halls and redirecting the kids cutting class, “the things that used to drive me crazy.” In his district, there aren’t too many positives to glean from remote learning. “We’re missing a key part of what’s really important in studying ensemble-based music in schools and that is the social component, the working with others.” And he worries about what comes next.

But Monteiro isn’t completely pessimistic, in part because music education in the United States has come a long way in the past couple of decades. 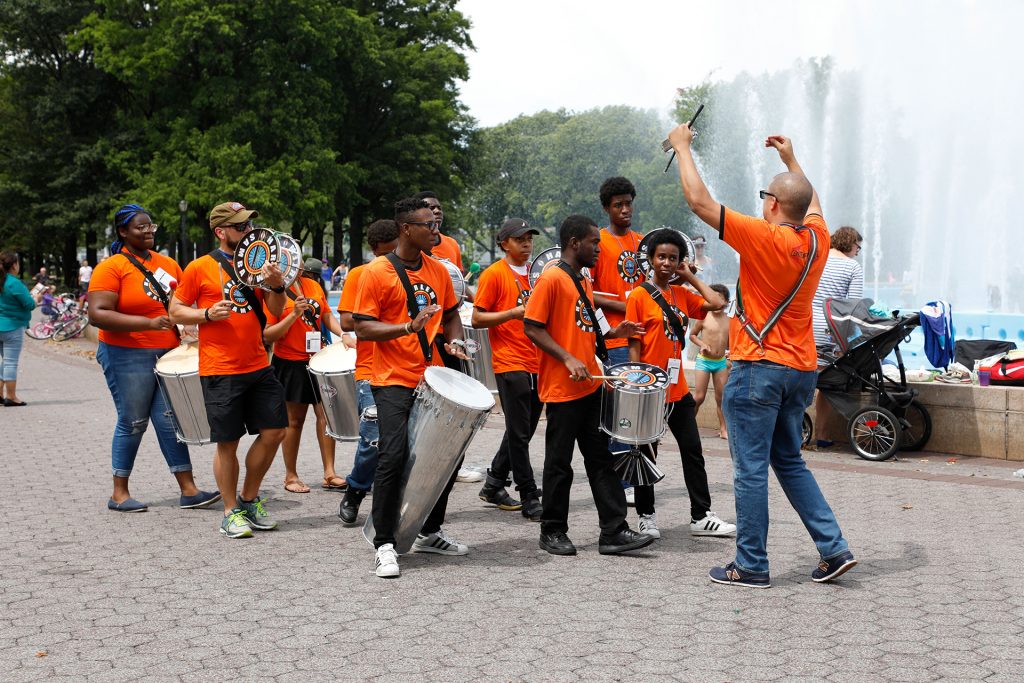 Before COVID-19, Dana Monteiro (’16) and Harlem Samba performed at the 2017 Louis Armstrong’s Wonderful World Festival in New York City. He says he can’t wait to return to live, in-person music. Taylor Hill/Getty Images for Kupferberg Center for the Arts at Queens College

“There are more schools across the country offering music today than there were 20 years ago,” according to a December 2019 Hechinger Report article, “and more of those schools employ full-time music teachers.”

And the pandemic, along with a renewed national focus on racism, has the potential to accelerate some of the changes that were pushing music education to a more inclusive, dynamic future. In recent years, teachers like Monteiro have been tackling some of the systemic problems facing the field, including a lack of access and limited playlists, opening it up to more students and different types of music.

“The way the country has been in the last four years or so, particularly the past year, represents a term of turbulence that is unprecedented,” says André de Quadros, a CFA professor of music. “It’s triggered a reckoning in all fields, and music education is starting to do much more self-examination.”

For close to a century, learning music in school has felt a lot like being drilled for the army: a director stands at the front, shouts out the orders, and the students try to keep up. That’s because after World War II, demobilized military band leaders frequently found jobs teaching music in public schools, says Karin S. Hendricks, chair of CFA’s music education department. Their example set the standard for generations.

“We’ve been stuck in this director-centered model. We’re still recovering from that,” says Hendricks. School by Zoom—when it works—has presented a fresh way of instructing on a more personal level.

“When you rehearse a band of 50 kids all in one room, trying to hear them one at a time is a nightmare,” says Heather Katz-Cote, K–12 director of performing arts in Westwood, Mass. As a remote teacher, she can selectively use the mute button to focus on one student or the whole class. “Now, I’m actually assessing them. I love that they’re gaining confidence and taking that risk and letting me hear them.”

Katz-Cote (’16) is trying to figure out how she’ll capture that in the physical classroom. She’d already been pushing hard to move away from the sergeant major model—“I don’t want students to be sitting there with my throwing information at them”—but she’s still reassessing everything about her teaching. The songs her students learn, the instruments she teaches, lesson plans, and concert cycles are all up for examination.

“We’re stepping back a little bit and looking at what we’re doing, how we’re doing it, and what it means to be a music educator,” says Katz-Cote. “We’re in a place of change right now and that’s scary and exciting at the same time.”