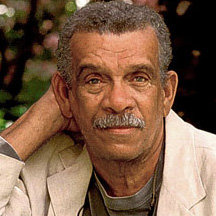 DEREK WALCOTT (January 23, 1930 – March 17, 2017), founder and former artistic director of Boston Playwrights’ Theatre, was a world-renowned poet and playwright and the author of numerous books of poetry, essays, and plays. He received the Nobel Prize for Literature in 1992. Walcott’s Dream on Monkey Mountain received an Obie Award for the most distinguished foreign play.

His plays have been produced by the New York Shakespeare Festival, the Mark Taper Forum, the Negro Ensemble Company, the American Repertory Theatre, Arena Stage, and the Guthrie Theatre, among others. His stage adaptation of Homer’s The Odyssey was staged to sold-out London audiences by the Royal Shakespeare Company in 1993. Born in 1930 on the island of Saint Lucia in the West Indies, Walcott graduated from the University College of the West Indies. In 1957, he received a Rockefeller Foundation Fellowship to study American drama and has continued to win numerous awards for his verse and drama, including an O’Neill Foundation-Wesleyan University Fellowship for Playwrights (1969), the Guggenheim Award (1977), the American Poetry Review Award (1979), the Welsh International Writer’s Prize (1980), the Queen’s Medal for Poetry (1988), and the W. H. Smith Prize (1991). Walcott was awarded a five-year MacArthur Foundation Fellowship in 1981.

Walcott founded the Trinidad Theatre Workshop in 1959 as the Little Carib Theatre Workshop. The Trinidad Theatre Workshop has grown into an internationally recognized repertory company based in Port-of-Spain, Trinidad. They have toured the United States, and their Boston performances include the 1995 productions at the Boston University Theatre on Huntington Avenue of Walcott’s Elliot Norton Award–winning The Joker of Seville and Dream on Monkey Mountain. In 1981, when he began teaching poetry and playwriting at Boston University, with BU’s help and a portion of his MacArthur Foundation Award, Walcott established Boston Playwrights’ Theatre.