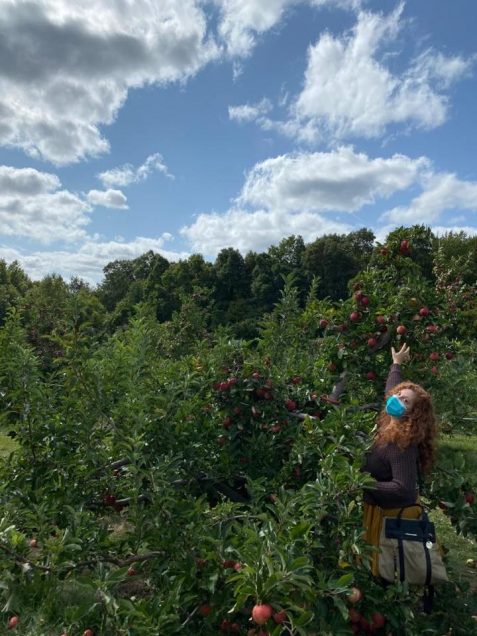 On Nov. 10, we’ll talk about Cayenne Douglass’s new play Beasts, which she describes this way:

Beasts is a character-driven play that explores the chaos of American womanhood through the dark underbelly of a relationship between Fran, a pregnant suburbanite, and her older sister Judy, an irreverent artist with a propensity for disruption. When Judy hears that Fran’s husband Jim is on a business trip, she decides to pay Fran a visit. The friction between these siblings is palpable and only continues to intensify as Judy unearths confounding secrets and infringes upon the relationship that Fran has with her Doula Amelia, an elitist earth mama who’s been Fran’s only female friend since relocating back East. As their environment starts to mirror the anarchy of their psychological labyrinthine world, form and logic disintegrate into another realm as Fran and Judy unwittingly fight through pain to arrive at a crystalizing moment of realization.

We asked Cayenne to share a little bit more about her play, and influences on her writing life:

What writing rituals do you have? What is your routine? What are your writing quarters (coffee house, library, home office)?
Oh god—I don’t have a ritual—I wish I did—and I’m ashamed to say this because it makes me feel like a trash person but I write a lot in bed. I’ll also write at a desk to switch it up and make it more exciting but those are my two places. On occasion, I’ll go to a coffee shop. There’s a crepe and wine café near my place in New York that I go to because I can never get on the internet (they have internet—but for some reason I can’t get on). It forces me to stay on task once I’m there… and I’m done people watching… and eating… and organizing my desktop… and, hey! Wait a minute this didn’t work.

How do you combat writer’s block? What motivates you to keep going?
I never really have writer’s block but I have huge bouts of resistance—like right now, as I write this—I have a final draft due tomorrow morning of a different play, but this is me avoiding doing that. Ha!

To work through resistance, I usually employ three tactics: 1) Give myself permission to write bad, obvious, stupid dialogue to find the shape of the scene or the play. 2) I’ll set a timer and say, ‘okay Douglass, you’re going to write the next three pages in eight minutes—GO!’. I make a game of it. I did that a lot when I was writing the first draft of this thesis and I wrote the first draft of this play in three days which is not normal for me. I’m usually very slow. I should also note that I kind of hate the way it makes my brain feel to write that fast, but I know it’s a really effective way of turning out pages. Also, I had no outside pressure telling me this project needed to be done (at that point it wasn’t my thesis) so the artistic rebel wasn’t rearing her cantankerous head. 3) When I don’t have a deadline, I’ll create one for myself by having a reading and announcing it on social media because the threat of being embarrassed is a great motivator. Usually a few days before, I’ll convince myself I’m a masochist for doing this but it works. Every spring break and winter break I set up a reading for myself in NYC to keep pushing forward. Even though it’s painful afterwards I’m always very grateful I put myself on the hot coals!

Where did you grow up? Does that place influence/find its way into your writing?
I grew up in Manhattan and it absolutely influences the way I write! When you grow up in the city, you’re constantly around different cultures and races; on a daily basis you’re encountering people from a wide variety of economic and social classes. The first five years of my life were spent on The Lower East Side, which at the time was incredibly diverse with Dominican, Puerto Rican, and Asian families, Jewish immigrants, Jamaicans, Irish, Polish, Ukrainian, people like my father who came from Trinidad. My babysitter would bring me to what appeared to be a small narrow clothing store, but if you walked all the way to the back and knew the special knock you entered a secret place called “the number hole” where people could bet on numbers. My parents rented out their loft to Hari Krishnas where I ran around and danced between candle ceremonies. My mom and I sang and danced in the Amato Opera, which was a volunteer opera company on The Bowery where we would perform large-scale operas in a tiny building right next to (the late) CBGBs. I was one of the few children among adults from all walks of life! At the end of a run we would all strike the set and then sit down for big Italian family style meal and break bread together—I think my tenth birthday was spent this way. You get the point!

A large part of playwriting is dialogue writing, and how you write dialogue is directly related to what you are able to hear in your ear. What accents, cadence, vernacular, rhythm you’re able to tap into. When you grow up in a dense and varied environment such as New York City you hear a lot, you encounter a lot. Other people’s experiences may not be the same as yours but if you can remain open and let that in you have a wealth of raw material to draw from. When I was a kid I wanted to live in the suburbs with a green yard, a Golden Retriever, a dad (ultimately my mother was a single mom) and siblings (I’m an only child) but now, I’m so glad, for a number of reasons, but especially for my craft that it wasn’t that way. I was raised in partnership with community and that community came in all forms. That said, I would still take the Golden Retriever—or any puppy—for that matter! I’m not so naïve as to say ‘I don’t see differences’ because, of course, I do (and they should be celebrated!) but I don’t see lines as clearly defined as someone who grew up in a homogenized neighborhood where there was primarily one type of person striving for one type of life. Growing up immersed and a part of so many heterogeneous communities my understanding of humanity is different. I’m not saying I understand humans—I don’t—otherwise I wouldn’t be a writer. I write to understand.

What inspired your thesis play? Why this play? Why now?
I wanted to write this play because I found myself at the center of many conversations with friends regarding the feelings around pregnancy. Women who were pregnant, and spoke about the loneliness of pregnancy and the abandonment of their childless friends as well as friends who were not pregnant but wanted to be and shared that it was too painful to be around pregnant women and babies because they felt a guttural rage that they couldn’t logically reconcile. When I was thinking about how to approach the work I was very clear about the type of play I wanted it to be. I kept saying, I want it to be like, or have the feeling of, True West by Sam Shepard, and in fact as a starting point I patterned the structure closely to that play. There are so many plays and movies where we see men express their feelings in a ‘balls to the walls’ manner, men at each other’s throats, glorifying ‘the chaos of American manhood’…but what about the chaos of womanhood? What about bestial instincts and rage women experience. We don’t see it, or when we do, women are written off as being bitchy, or worse, something comical to laugh at.

My hope is this play will capture the ugly underbelly of the subconscious and the rough terrain it travels. The sacred, the divine, the feminine, the goddess. The Goddess with all her fierceness and rage with all her beauty and warmth. This play is about love between sisters which could also be translated into close friends. The sisters are not ‘crazy’ they are in fact the sanest when they are exhibiting their true feelings. It’s not a kitchen sink drama or a play ‘for women’. It should trick you into thinking its realism but when you look closer its laced with surrealism. There’s an existentialism that drives the narrative forward and operates in conjunction with and in opposition to the language.

We hope you’ll join us on Nov. 10 to talk about Cayenne’s new play! You’ll need the Zoom app (it’s free!) to participate, and it is recommended you call in a few minutes before “curtain” time. The Zoom link will be available here (scroll down); click here to learn more about the full BPT Talks line-up.