ClusPro is a web server that performs rigid body docking of two proteins by sampling billions of conformations. The server has over 13,000 registered users and performs about 5,000 docking calculations each month. The two papers describing ClusPro have been cited over 1,500 times, and over 600 of these papers reported protein complex models built by the server. ClusPro has been participating in the CAPRI (Critical Assessment of Predicted Interactions), the ongoing communitywide experiment devoted to protein docking. In the CAPRI challenge, participating research groups and automated servers are given prediction targets, each being an unpublished experimentally determined structure of a protein-protein complex, and each group is expected predictions. The submitted models are evaluated by independent assessors. More recently CAPRI has been joined forces with the ongoing CASP (Critical Assessment of protein Structure Prediction), and most targets had to be predicted started from sequences rather than structures of component proteins. 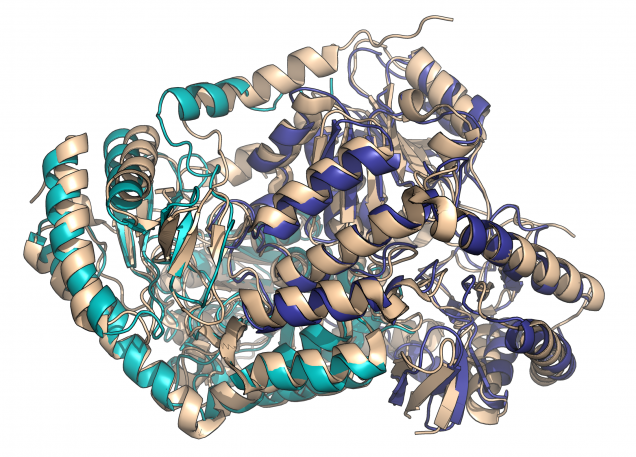 A homodimer prediction (cyan and blue) submitted by the ClusPro team which received a Medium quality score, overlapped with its crystal structure (wheat).

The most recent combined competition, CAPRI46-CASP13 was held during the summer of 2018 and has been evaluated on December 1-4 at the Iberostar Paraiso Maya resort on the Riviera Maya. The Vajda group was represented by graduate students Katie Porter and Israel Desta, who participated in the competition, in collaboration with the group of Prof. Dima Kozakov, a long-term member of BMERC, now an associate professor in the Department of Applied Mathematics at Stony Brook University. According to the evaluation at the meeting, ClusPro was the best performer in the server category. The server performance is described in the paper KA Porter et al., Template-Based Modeling by ClusPro in CASP13 and the Potential for Using Co-evolutionary Information in Docking, to be published in the journal Proteins: Structure, Function, and Bioinformatics.