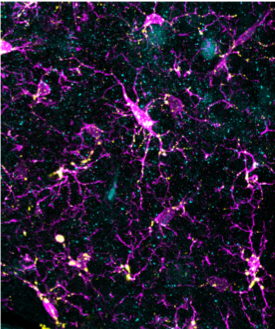 Schizophrenia is a debilitating psychiatric disorder characterized by hallucinations, emotional withdrawal and a decline in cognitive function. Comer, Jinadasa and colleagues have found that a highly-associated schizophrenia gene, complement component 4 (C4), plays a direct role in the pathogenesis of disease-relevant phenotypes. Increased expression of the immune gene C4 leads to reduced connectivity of neurons in the medial prefrontal cortex, a brain region with notable gray matter loss in schizophrenia. This disruption in the development of the frontal circuits caused deficits in the social behavior of young mice that persisted into adulthood. Taken together, this finding is important because it reveals a critical window in the development of the prefrontal cortex in which C4 could be therapeutically targeted to alter phenotypes in schizophrenia.

Heather Hook of the Siggers Lab is a recipient of the inaugural...

The Department of Biology at Boston University mourns the loss of Sir...

Brandon Güell of the Warkentin Lab recently won second place in the American...