As the United States approaches mid-2016, seats throughout the Executive, Judicial, and Legislative branches of the federal government are in play. As Republicans and Democrats fight for control, the docket of debatable topics continues to grow. One issue in particular, employee compensation, continues to be one of the most popular in both state and federal level politics. While the federal-level discussion of minimum wage is increasing due to an Executive Order signed by President Obama to shift the minimum wage of Federal contractors and subcontractors to $10.10 (The White House, 2014), and a recent change in the federal overtime regulations, income inequality remains at the forefront of discussions at the state level.

According to two members of the Economic Policy Institute (Cooper & Hall, 2013), the average wage of a U.S. worker has declined over the past several decades. This decrease in wage, particularly for those in low-wage positions such as those found in the hospitality lodging industry, has caused a widening of income inequality among citizens of this country. In addition, while the erosion in wages is occurring, the distance (gap) between minimum wage workers and average United States hourly workers has increased to a ratio of almost three to one. In other words, for every dollar the average American wage earner makes, a minimum wage worker receives $0.37. For a historical perspective, the ratio was approximately two to one ($0.50) in the 1960s. This income inequality negatively affects the individual worker, the national economy, and industries like hospitality that have a high percentage of low-wage workers (Cooper & Hall, 2013).

As the top political official at the state level, the governor of each state has influence on the labor law of that state. Given the two primary political parties, different forms of support for labor legislation, and each state governor belonging to a political party, we hypothesized that states with democratic governors will have higher average wages in 1997 and 2015. Whereas states with republican governors will have lower average wages during those years. While the governor is not the only elected official that influences state-level changes in compensation mandates, they are the most visible figure and have the potential to spearhead legislative changes. Additionally, in their role as governor, they have the ability to veto new legislation as well as proposed amendments that come from the state legislature.

This study aims to examine the inequality in more depth by focusing on the average wages of two common lodging industry positions throughout the United States. The researchers want to establish if relationships exist between these lodging industry employees’ wages and the state governors’ political party affiliations and the cost of living in that state. In addition, the researchers aim to examine the federal minimum wage versus the average wages of these lodging positions.

Hospitality Wages: Are they affected by state governors?

ABOUT THE RESEARCH METHOD & DATA:

The U.S. Bureau of Labor Statistics (BLS) is the primary federal agency in charge of measuring labor market activity. For purposes of this research, the researchers used the Occupational Employment Statistics collected by the BLS. At the time of analysis, data were available on a state-by-state basis from 1997 to 2015. The researchers developed a list of all gubernatorial party affiliations, average wages of hotel, motel, and resort desk clerks, as well as average wages of maids and housekeeping cleaners for every state in 1997 and 2015. The researchers then compared the wages of each occupation by using a t-test to determine if there was a significantly different mean for each group. The researchers used regression analysis to examine data in 2014. In the regression analysis, the researchers included political party, cost of living, and percent of employees covered by a union in each state.

The political affiliation of a governor alone may not be a good predictor of the average wage of hotel clerks or housekeepers. However, there is a clear difference when examining the differences in wages post-hoc, making the political party of a governor worthwhile in discussion. In particular, when examining the political affiliations from 1997 to 2015, the average wages of employees in states with democratic governors are typically higher, but at the same time they also tend to have a higher COLI. 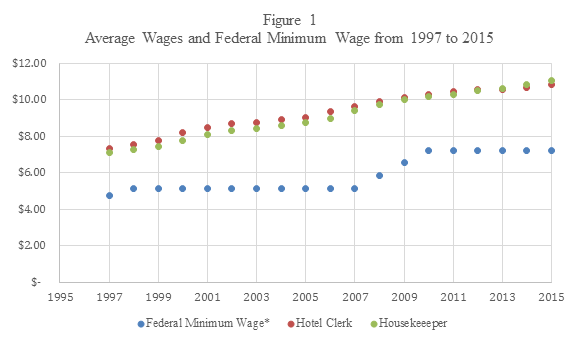 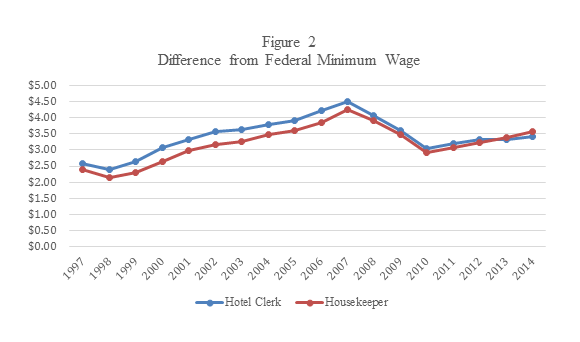 Theoretical underpinnings used to illustrate politics in research commonly stem from non-political areas, such as economics (Shavell, 1979; Besley & Case, 2003; Downs, 1957). For example, researchers commonly cite the Principal Agent theory as having applicability to not just economics, but also politics (Miller, 2005). Applied to this research, a state’s governor is acting as an agent on behalf of their constituents (the principal). This idea is somewhat counter-intuitive because an agent, traditionally, works for a principal, yet the governor of a state has significant influence and power over his/her constituency. This relationship presents a challenge because the agent is motivated to act in his or her own best interests to ensure eventual reelection.

A cursory review of Democratic and Republican Parties in the U.S. shows the Democratic Party has a stronger tendency to support workers’ rights compared to the Republican Party. In addition, each party’s platform supports this observation (Democrats, 2012; GOP, 2012). Although both parties show their support for the workforce, the policies they support vary significantly. The Republican Party traditionally focuses more on the development of the economy and the industries that support the restoration of lost jobs (GOP, 2012). The Democratic Party, besides discussing the economy, expressed their point of view by taking a side that favors the rights of workers and not management/ownership (Democrats, 2012). Wilhite and Theilmann (1987) examined the influence of political action committees on legislation and found that democratic members tended to support labor legislation and received more funding from labor unions.

While the hospitality industry includes a variety of sectors, one sector in particular, the lodging industry is the focus of this research. The lodging industry is continuing to rebound after the Global Financial Crisis (GFC) and common metrics of success are continuing to spur optimism throughout the United States market. Both academic and trade publications are highlighting the fact that operational managers are still concerned about one very critical challenge that continues to plague the industry – effective strategies to manage employees, and more specifically, strategies related to the hourly compensation rates for non-tipped lodging industry employees.

The academic study of politicians at the state the federal level is not a new trend, although the connection to the hospitality industry, and more specifically those issues related to compensation, is limited at best. While the merging of hospitality and political science is an infrequently made connection in the academy, unlike economics and political science, it can be a useful partnership for hospitality industry and academic practitioners. Although some research (Erikson, Wright, McIver, 1989) has shown that an elected state legislature is not good predictor of a state’s public policy, no empirical research exists looking at this fact in hospitality wages.

Research (Ghiselli, La Lopa, & Bai, 2001) has shown that in the hospitality industry, the salary and benefits package is one of the most prevalent reasons employees leave an organization. In previous work, Pizam and Ellis (1999) found a company’s approach to compensating (in terms of monetary and non-monetary benefits) their employees has an impact on turnover intention.

A common theory is that as minimum wage increases, low paid workers tend to see an increase in wages. However, previous researchers have shown it may not affect average wage, but instead decrease the wage inequality for the lower end of the wage distribution (Machin, Manning, & Rahman, 2013) or compress the possible starting wages (Katz & Krueger, 1992). WageWatch, Inc. addressed these issues in their executive summary as well. WageWatch, Inc. indicated an increase in starting wages would cause supervisors to make the same or slightly more than the employees they supervise, which would lead to a need for increased wages of supervisors (WageWatch Inc, 2014).

There are several reasons why difference in pay based on state may exist, although further research is warranted to provide a more comprehensive analysis of how these differences may affect the overall results. For example, there are dramatic differences in cultures, right to work legislation, cost of living, and dominant industries based in states or regions. In addition, state legislators are the ones who typically present, debate, and vote on new laws that could directly or indirectly influence wages in each state. Each of these on their own, or a combination of multiple dimensions, could be impact this results.

This research conducted an analysis on the average hourly wage of two common lodging industry positions; hotel, motel, and resort desk clerks, as well as maids and housekeeping cleaners. The results highlight that, on average, the hourly wage for these positions, in 1997 and 2015, were higher in states with a democratic governor when compared to states with a republican governor. While the debate on minimum wage’s impact on the wages of non-minimum wage workers is ongoing, this research indicates federal minimum wage increases have little influence on the increases in average wages of these two positions. There are implications of this analysis for hospitality industry practitioners, labor union representatives who are involved in the collective bargaining process, and members of the academy who are responsible for creation or teaching of policy related to compensation, benefits, and overall strategic human resources management.

Nicholas J. Thomas, Ph.D. is an Assistant Professor and Director of the Center for Hospitality Research and Education in the School of Hospitality Leadership located within DePaul University’s Driehaus College of Business in Chicago, Illinois. He teaches undergraduate and graduate level courses related to customer service, human resources, and technology in the hospitality industry. He has frequently conducted industry-focused workshops throughout the United States and Asia. Prior to joining higher  education, Dr. Thomas occupied leadership positions in some of the world’s most successful luxury hospitality organizations, with the majority of his career focused on human resources and lodging operations.

WageWatch Inc. (2014). Executive summary. Presented at the AH&LA Board of Directors Meeting and Special Meeting of Members, Washington, DC, March 2014. Retrieved from www.ahla.com/uploadedFiles/BoardBookMarch2014.pdf