Academic journals often contain statistical information, and this is certainly true in the hospitality discipline. So it may be interesting for some readers to examine the nature of business statistics in general, review the contributions of a pioneer in the development of business statistics, and explain how some of these methods can be applied to the prediction of future performance in the lodging industry.

Roger W. Babson is remembered today primarily as the benefactor of Babson College in Wellesley, Massachusetts. Few may realize that he was a well-known investor in the early twentieth century and the founder of Babson’s Statistical Organization, which served as a clearinghouse for information about investments and business conditions. After developing this firm and amassing a small fortune, Babson turned his efforts to offering advice through many other channels. He served for more than a decade as a weekly columnist for the Saturday Evening Post and published nearly 50 books.

One of Babson’s earliest and most renowned works, Business Barometers for Anticipating Conditions, was first published in 1909. Although written over a century ago, it expresses his vision of a world in which business statistics could chart a path to business success, and remains quite relevant today. In this book, he identified two general classes of business statistics, comparative statistics and fundamental statistics.
Babson defined ‘comparative statistics’ as those that are used in determining the current financial condition of a subject being reviewed and are useful for making buy, sell, or hold decisions for particular investment assets. In the case of the hospitality industry, this would be analysis based on standard financial statements (such as profit and loss statements) and other internal performance measures generated by the business itself (such as occupancy percentage or average daily rate).

Babson had a mixed opinion of comparative statistics, which he believed only measured surface conditions. He argued that such statistics were worthless for determining the general course of the stock market and inappropriate for investors seeking to sell at a profit, and were only acceptable for buy and hold investors. He believed that if general market conditions remained stable, comparative statistics might be useful in forecasting rises and declines in the market, but noted that the markets are far too unstable for such statistics to be used in this manner.
Babson defined ‘fundamental statistics’ as those related to the broader underlying conditions of a subject being studied. These included statistics in categories such as new construction and real estate, labor conditions, money conditions, and manufacturing.

Babson viewed fundamental statistics in a much more positive light, believing these contextual factors were critical to the ultimate success of individual companies. The astute reader will recognize that, although some of these measures have changed over time due to the growth and decline in specific industries, these closely mirror the statistical categories used in the reporting of economic conditions today. His studies in this area represent perhaps his greatest contributions to the business community.

The Federal Reserve Bank of Boston (FRBB) is one of a dozen such institutions in the United States. It was established in 1916 and currently serves the First Federal Reserve District, an area that includes the six New England states of Connecticut (excluding Fairfield County), Massachusetts, Maine, New Hampshire, Rhode Island, and Vermont.

The stated goal of the FRBB is to promote economic growth and stability. Due to its unique focus on New England, it publishes a wealth of statistical information regarding the financial health of the region. Its “Summary of National Economic Data” is based on information collected from a variety of federal agencies and updated almost daily. This offers a particularly interesting point of comparison to the fundamental statistical categories defined by Babson a century ago, as demonstrated in Exhibit 1.In addition to national data series, the Federal Reserve also publishes regional statistics that are even more closely aligned with the statistics preferred by Babson. These include additional categories such as business and consumer bankruptcy filings, merchandise exports, and state tax collections.

Application to Forecasting in the Lodging Industry Previous work by hospitality industry practitioners has identified and formalized a long-known relationship between Gross Domestic Product (GDP) and hotel room demand. Hospitality industry researchers have also studied the impact of macroeconomic variables on hospitality stock returns. As an example, Jeong-Gil Choi conducted an extensive study in 2003 regarding forecasting for the hotel industry. This attempted to develop a system that would identify early signals of recession or recovery based on 32 economic indicators. 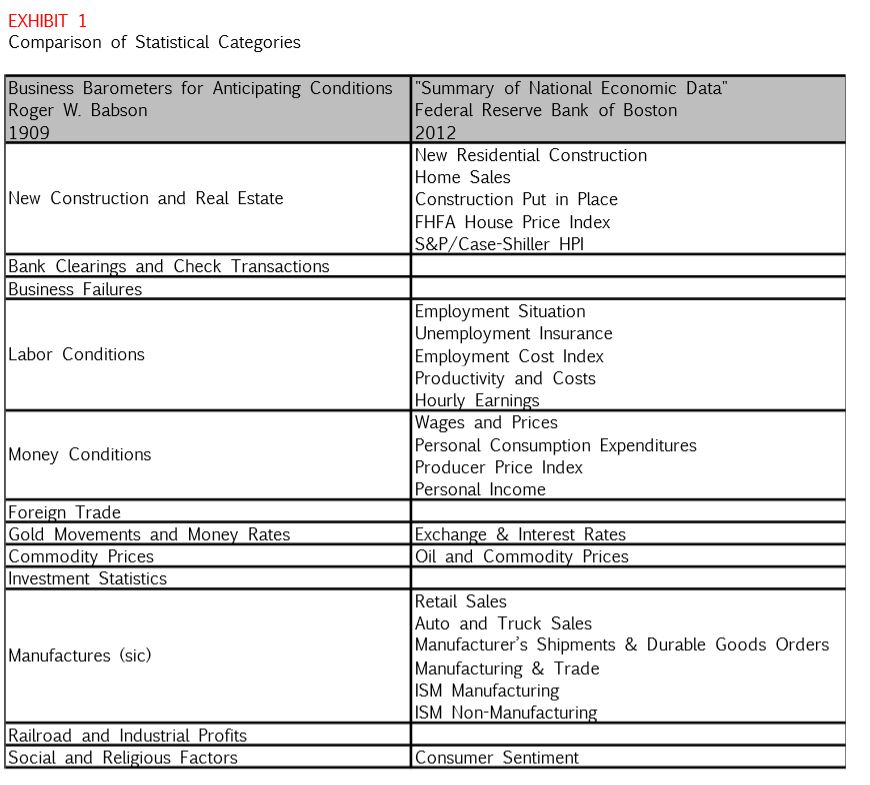 The following analysis provides an example of how the system of business statistics pioneered by Roger Babson can be used to forecast the performance of lodging markets, in this case for the New England region. My study takes a different approach than typical academic articles, because it is designed to be understood and replicated by practitioners, as well as academics. It is also the first study to utilize data on a state-by-state basis.

Three scenarios were prepared for each of the six states in New England – Connecticut, Maine, Massachusetts, New Hampshire, Rhode Island, and Vermont – in addition to the entire New England region and the United States as a whole. Regression analysis was performed to determine if ‘revenue per available room’ or REVPAR could be predicted using simple business statistics.

REVPAR is the most common performance metric in the hotel industry and may be calculated in two different ways. First, revenue from overnight guest rooms is divided by the number of rooms available during a given period. Available rooms are considered to be all guest rooms physically located within the hotel, including those that are temporarily unavailable for sale due to being out of service or under renovation. Second, the occupancy percentage of a hotel can be multiplied by the average daily rate of the hotel during a given period.

Simple data easily obtainable from public sources were utilized in this study. For all scenarios, REVPAR data was obtained from Smith Travel Research for the period 2001 to 2012 for the entire United States and each of the six states that comprise the New England region. The independent variables were ‘lagged’ by one year in order to determine how they impacted REVPAR in the following year. Lagging, or autoregressive regression, is a technique whereby data from a prior period is used to make predictions for a dependent variable in a future period. 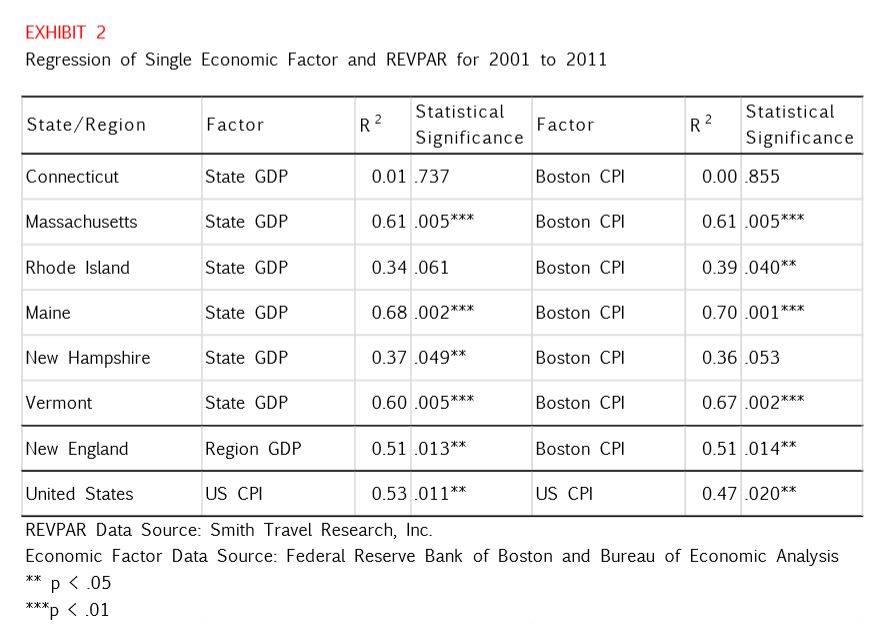 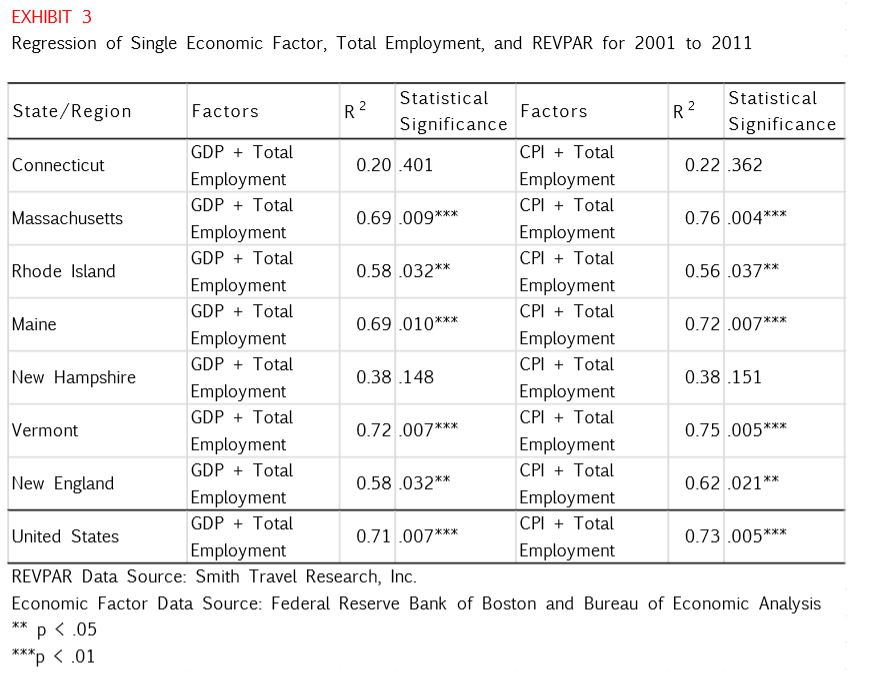 As previously mentioned, there has been a noted relationship between GDP and hotel demand. However, this relationship does not address supply which, when taken together with demand, might provide insight into the cost of hotel rooms as expressed by the average daily rate (ADR). In order to address this, we have utilized REVPAR as the dependent variable and run two regressions using GDP and CPI as separate independent variables. The results are shown in Exhibit 2.These results indicate significant similarity between the use of GDP and CPI as predictors of REVPAR from 2001 to 2011. This is not particularly surprising given the close relationship between these two economic indices. The explanatory power of these relationships is quite high, with GDP or CPI explaining over 50% of the variance in REVPAR for Massachusetts, Maine, Vermont, the New England region combined, and the United States as a whole. Perhaps the most interesting findings in Exhibit 2 are the comparatively low relationships between REVPAR in Connecticut, New Hampshire, and Rhode Island versus their state GDPs. One could hypothesize this is due partly to the interwoven relationship between these states and their neighboring states, Massachusetts and New York, whereby the drivers of their economies may not be fully reflected in their own state data.

In an effort to make the model more robust, meaning to enhance its predictive ability, an additional regressor was added. In multiple regression models, care must be taken to ensure that the variables are not highly correlated with each other. Several other additional economic variables were tested, and Total Employment for each geographical area was identified as an appropriate variable. The results are shown in Exhibit 3.

However, it might be a very good starting place in terms of a forecast, particularly a multi-year forecast based on economic data provided by outside agencies. A likely application at the property level might be to check an assumption of REVPAR growth being prepared as part of the annual budget process.

This article has provided some background about the history and importance of business statistics in the New England region, and identified potential uses for the data in analyzing and predicting future results for the lodging industry overall, as well as for specific applications. It has also explained a simple application of business statistics that derives from work originally conceived over a century ago, which is still useful today. Simple business statistics can be utilized by hotel operators as an additional tool for budgeting and forecasting.

Barry A.N. Bloom, Ph.D. is an Associate Professor of the Practice in the School of Hospitality Administration at Boston University. He teaches courses in lodging operations and technology, asset management, franchising, and management contracts and negotiation. His academic research is focused on hospitality stock performance, hotel operating performance, and personal financial literacy. Prior to joining the faculty, Dr. Bloom spent over 25 years in the hotel investment industry, where he focused on hotel asset management with a number of leading firms including CNL Hotels & Resorts, Hyatt Hotels Corporation, and Tishman Hotel Corporation. Email banb@bu.edu