The Arts Respond to COVID-19

Between March and September 2020, the BU Arts Administration compiled this list of media articles that chronicle the impact of the pandemic on the sector and the creative responses of the field.
We are currently conducting a longitudinal research project with ArtsBoston to track the career outcomes of professional arts managers who were employed at a large sample of Greater Boston arts organizations at the time the pandemic hit in February. We will post the results of that study at regular intervals as they become available. 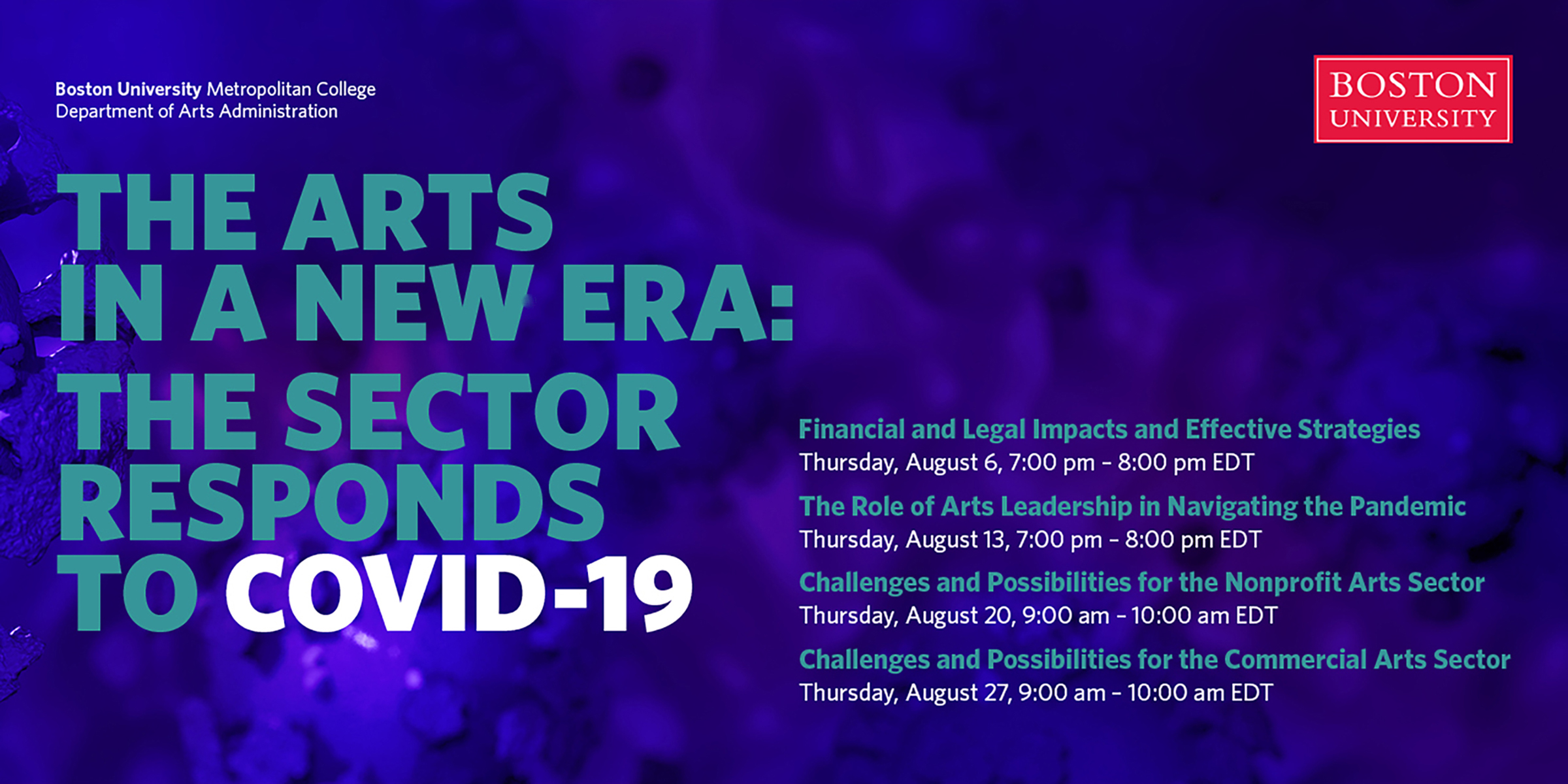 During summer 2020, The Boston University Arts Administration Program presented a webinar series examining the ongoing impact of the pandemic and the strategies that the arts sector has been developing to meet this unprecedented challenge. Since the beginning of the lockdown in late March, the department has been been tracking the sector’s response to the pandemic as reported in the media on The Arts Respond to COVID-19 webpage. Through this series of four informal roundtable discussions, the  Arts Administration program faculty examined different aspects of the current crisis and how it is transforming the field. Drawing upon their long-term experience as leading arts professionals in Boston and New York, faculty members were able to discuss specific financial and human impacts on organizations; short-term strategies for maintaining operations and sustaining connection with audiences; and the long-term implications for transforming the sector’s business models and creative strategies. The series was moderated by Doug DeNatale, Program Director, and Lauren K. O’Neal, Senior Lecturer.

Here are the webinar topics, faculty panelists and recordings available for viewing:

Arts nonprofits have been financially devastated by the pandemic.  In Massachusetts alone, a survey by the Massachusetts Cultural Council reveals that the sector has lost $425 million in lost revenue, affecting 17,000 jobs, and will require an additional $117 million to implement recovery strategies.  In addition, existing and future legal obligations pose a major challenge.  The outcomes for individual organizations will vary widely based on their management practices, fundraising programs, and financial planning.  What are the questions and actions that organizations need to consider to survive financially?  When is it time to consider merging or restructuring?  Are there opportunities for positive change in the midst of this storm? [Doug DeNatale, moderator]

2.  The Role of Arts Leadership in Navigating the Pandemic Thursday, August 13, 2020

As never before, effective arts leadership will be essential to organizational survival and future development.  In an instant, accepted norms for financial planning, outreach, programming, and organizational management have been overturned.  Organizations have been forced to rethink their entire short- and long-term strategies almost overnight.  The pandemic has presented an unprecedented test of leadership.  What are the characteristics of arts leaders who can rise to the challenge?  [Doug DeNatale and Lauren O’Neal, moderators]

3.  Challenges and Possibilities for the Nonprofit Arts Sector Thursday, August 20, 2020

4. Challenges and Possibilities for the Commercial Arts Sector Thursday, August 27, 2020

The pandemic has brought Broadway to a standstill.  At present, commercial theater will not open until January 2021 at the earliest.  With rare exceptions touring productions have been suspended worldwide.  At the same time, new forms of access to commercial theater have become available through streaming platforms and commercial television.  Similarly, within the commercial visual arts sector, the marketplace has been forced to move online in ways that were long thought impossible.  How will commercial theater emerge from the pandemic?  Will new forms of performance and access forever change the nature of the commercial arts?  [Doug DeNatale, moderator]

Impact on the Arts Community

Resources for Artists and Arts Organizations

Artists We Have Lost