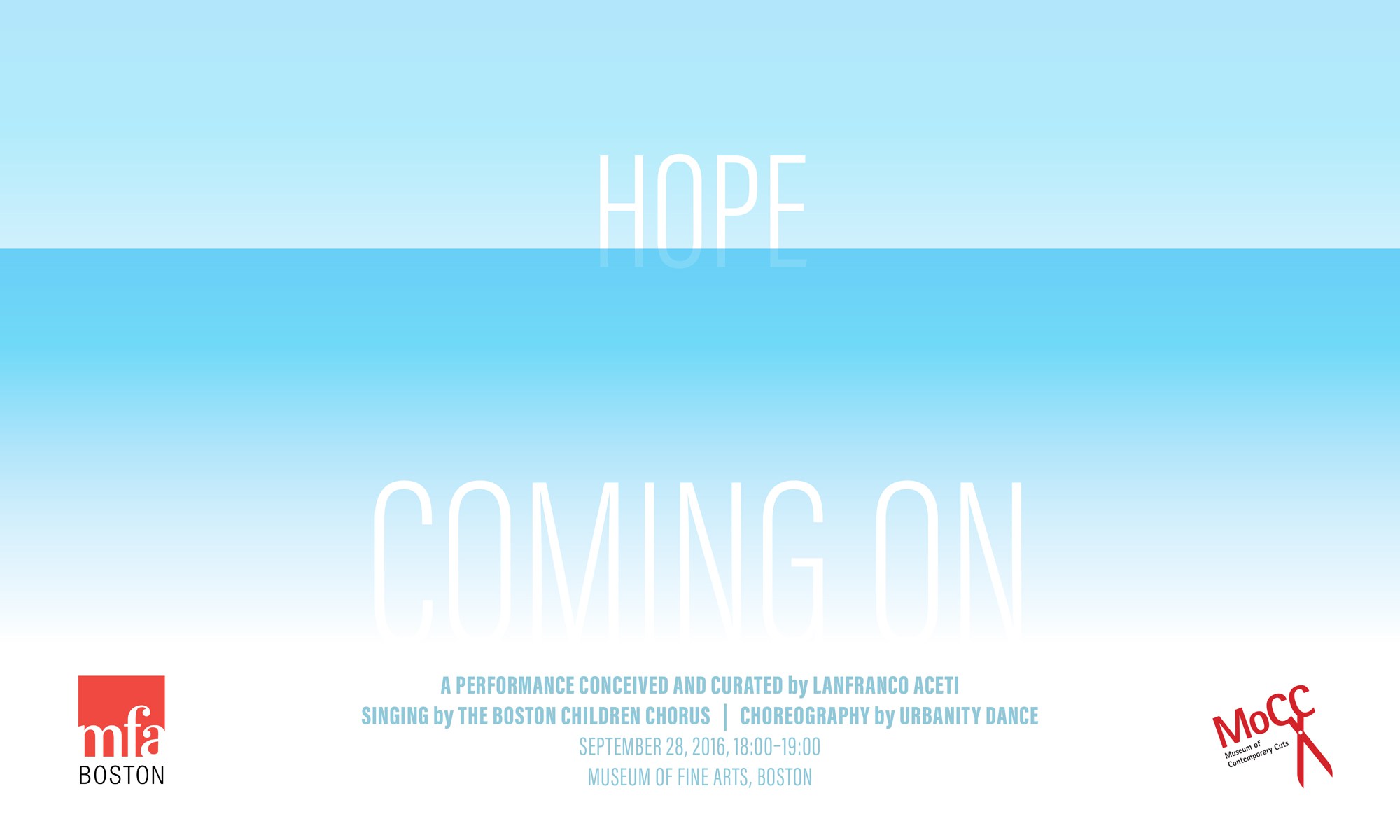 “You the people have the power to make this life free and beautiful,” proclaims Charlie Chaplin as the great dictator. At different times, leaders have stood up to deliver exhortations about hope, freedom, and progress. These have been politicians, clergy, and artists. Wednesday, spectators were greeted with a different kind of presentation.

We watched as about twenty boys enter and gaze upon a painting of a slave ship. Joseph Mallord William Turner’s The Slave Ship (Slavers Throwing Overboard the Dead and Dying, Typhoon Coming On) shows the chaos and tragedy of throwing humans into the water, during a storm.

Hope is a prerequisite for faith, as expressed by Jen Mergel, curator of contemporary art at the MFA. Without the hope that something is possible, people cannot have faith that the situation could ever change. The world can be a violent place, with the violence coming from natural and human elements. We sometimes need to be reminded to hope.

Hope Coming On, a performance conceived and curated by Lanfranco Aceti, reminds us of the power of unified voices, especially in a place that is usually filled more with silent reflection. The audience was captivated by the members of the Boston Children’s choir.

Amazing Grace, how sweet the sound!

A soft voice began to pierce the white noise of Gallery 251 (MFA, Boston). The room’s design made the soft voice enter and exit each person. This tiny sweet voice enveloped us. And slowly, this younger boy weaved through the people, making his way toward the slave ship. He circled the older boys. Joining their voices to his, this group proclaimed amazing grace, freedom, and hope.

There wasn’t a famous person among them. They did use words: Amazing Grace, Wade in the Water, and Libertatum. But the performance lifted the crowd beyond these words as their voices from different backgrounds illustrated harmony. People’s voices united could create hope and beauty, even in front of a violent image. It was fitting that these were boys and not grown men; youth is a better image of hope. Everything seems possible to children.

God’s going to trouble the water.

These children reminded us that we cannot remain calm as long as a typhoon of injustice and inequality continues to threaten and sacrifice people. We can only feign calmness for so long as some people’s voices are overthrown, and certain privileged voices try to subdue our hope and turn it into something divided. The experience of their unified voices was a provocative reminder that together we really can create a beautiful world. And this is a reason to hope.

The boys finished with Libertatum, daring us to live in freedom, if you’re gonna live. Then, the songs stopped, and they turned to the slave ship. 132 slaves were silenced on the original ship. And silently they exited, leaving us to face the slave ship.

The spirit of that performance carried over to a new installation at the Museum of Fine Arts, Boston called “Political Intent.” A room with works by eight female artists surrounded the open gallery space. From Amalia Pica’s Now Speak! lectern, Jen Mergel led us through a brief recounting of the concept behind this gallery and its openness. The lectern is open for anyone who wishes to say something. With real freedom, all people’s voices would be allowed to speak up.

Mergel pointed out a photo by Andrea Bowers of a transgender woman of color, CeCe McDonald. Modeled after an image by Walter Crane, Bowers uses this image to raise awareness of the discrimination against transgender woman. CeCe McDonald was imprisoned for 41 months after stabbing a man in self-defense. She was kept in a men’s prison. Bowers tries to raise awareness through her art of the social and political discrimination the trans women of color undergo as part of their existence.

People may not be throwing other people into the ocean, but this disappearance does not mean that everyone’s voice is given equal standing in society. But awareness of the issues, in an age where we are overrun with information, needs to make it to an audience. That’s what these artists tried to achieve through their work. The images here are powerful enough to be remembered.

But we can still ask which voices get to be heard? While this question needs to be addressed in the larger society, it begins at the micro-level. It often begins with one voice that is allowed to permeate the gathering, joined by other voices creating harmony. These unified voices remind us to hope.