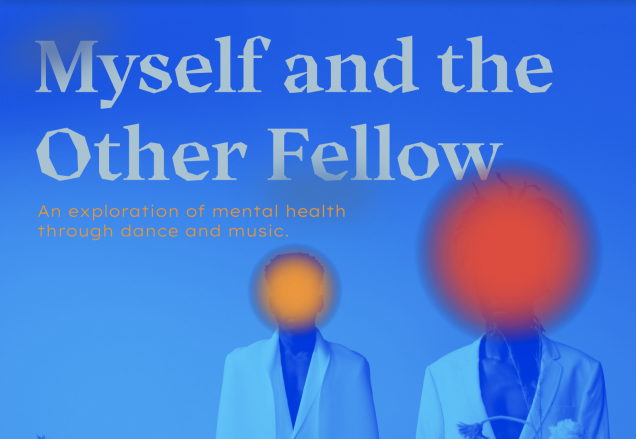 Performance and Community Conversation
A Collaboration between the BU Dance Program, the BU School of Music, and the BU Arts Initiative

Submit a question for the community conversation

BE PREPARED
To Gain Entry to the Theater, you will need:
– BU “Green Badge”, Proof of Vaccination, or Negative Covid Test
– Positive Form of Identification
– Your Mobile Ticket
– A Face Covering, Fully Covering Nose and Mouth

From David Schultz – “Myself and the Other Fellow”, a characterization of his own mind by Robert Louis Stevenson and title of Claire Harman’s biography of him, is an exploration in the relationship and intersection with the “other” … the alter ego, the performer vs the artist. That other fellow in my head who will often predictably or surprisingly pull my rational and even Self, that one who would love to stay safe and responsible, far into uncharted territories of terror or awesome wonder or just as likely into the many revisited vistas of doubt, loathing, or the ugly bloated self aggrandizing that may crumble and sheer off while you stand atop reveling in the view.  This process was also steeped in the intersection of that duality with the other “Other Fellow”; the audience member, the benefactor, the critic, that, as a preforming artist you work so hard, with months of preparation, practice, construction, deconstruction, restructuring, all done in the intensely private spaces of the rehearsal studio and to then place yourself in front of them for a singular event. How important to Myself is the Other Fellow?  When the many many Others, that had for decades been a constant source of self and validation, that had made the process of art making, the process that is held so sacred, the process that comprises the near total time spent in the entire endeavor of performative art suddenly was removed from the equation the relationship with the my life’s work was thrown into question. The concept of art making, that “process”, has always been considered as equal if not more important than any performative final product at least in the abstract.  Abstract due to the fact that the final performance has always been there, so to truly switch to process only made me question the the point of dancing and art creation for myself  and myself only. All of this while the clean and perfect Bach scores the movement.  The partita, as with many of Bach’s works, have always acted as a sort of mind leveling agent.  It usually only takes a few bars of Bach before my brain simplifies and the push and pull begins to dissipate.

From Tanya Gabrielian – I started playing the piano at the age of three, but it took almost fifteen years for me to understand the power music can have. When I was a child, I never felt the calling to be a musician, and after high school, when I attended the Royal Academy of Music, I felt as out of place and unwelcome as ever. I found solace through martial arts and trained intensively in Zhuan Shu Kuan, a northern Chinese style of kung fu. One evening while sparring, I slipped on a puddle of sweat. As I fell forwards, the pianist in me pulled back my arms to protect my hands. I landed on my head, twisted my spine, and spent the next month shuffling between nine hospitals and two operating rooms. A teenager maneuvering through a foreign medical system, I was entirely alone and wholly uncomfortable during my hospitalization, with nothing to distract me from the painful reality of my situation. Except that I did have a stack of CDs, among them Bach’s unaccompanied works for violin and cello. Until this point, I had been so immersed in the practice of music that I had never taken a step back to appreciate the experience of music. Now I had the time to listen—all I had was time—and listening elevated me above the hospital rooms, the waiting, and my own dull discomfort. Without Bach, I wouldn’t have made it through that month. Bach had lifted me from one of my lowest moments and made me into what years of practice had not: a musician. I hope you can find in them something to lift you above the daily discomforts of the world.

The University is committed to promoting a safe campus environment and has enacted a COVID-19 vaccination mandate for all members of the university who are on campus. We also strongly encourage all visitors to campus to be vaccinated. In accordance with current University safety protocol, cloth face coverings or disposable masks must be worn indoors at all times when not eating or drinking. Any participant with symptoms that could be related to COVID-19 should not engage in group activities and seek medical advice.

Hailed by the London Times as a “pianist of powerful physical and imaginative muscle”, Tanya Gabrielian has captivated audiences worldwide with her gripping performances. She shot onto the international stage at the age of twenty with back-to-back victories in the Scottish International Piano Competition and Aram Khachaturyan International Piano Competition. Since then, she has performed on four continents in acclaimed venues including Carnegie Hall in New York, Kennedy Center in Washington D.C., Sydney Opera House, Queen Elizabeth Hall and Wigmore Hall in London, and the Salle Cortot in Paris, with such orchestras as the Los Angeles Philharmonic, Sydney Symphony Orchestra, Royal Scottish National Orchestra, London Sinfonia, and the Boston Pops.

Jacqueline Burnett received her formative classical ballet training in her hometown of Pocatello, Idaho, from Romanian Ballet Master Marius Zirra.  She moved to New York City in 2005 to pursue the Ailey School/Fordham University joint BFA degree, graduating magna cum laude with departmental honors in 2009.  She joined Hubbard Street Dance Chicago in January 2008 as a Center Apprentice while completing her degree and became a member of the main company in August 2009.  Jacqueline received a 2011 Princess Grace Honorarium for Dance and was a member of the HSDC contingent for DanceMotion USA 2013, a U.S. State Department/Brooklyn Academy of Music cultural diplomacy tour in Algeria, Morocco and Spain.   In addition to dancing with Hubbard Street Dance Chicago, Jacqueline also serves as an Artistic Lead and teacher for Hubbard Street Summer Intensives, a repetitor for choreographies by Penny Saunders (Ballet Idaho, Seattle Dance Collective, Royal New Zealand Ballet), and dances with Robyn Mineko Williams and Artists and Seattle Dance Collective on a project basis.

David Schultz began training in Michigan with the School of Grand Rapids Ballet, where he then performed for four seasons with its company, Grand Rapids Ballet. Schultz joined Hubbard Street 2 in September 2009 and was promoted to the main company in August 2011, and he is the recipient of a 2012 Princess Grace Award.  David has had the wonderful opportunity to choreograph for multiple companies including DanceWorks Chicago, Chambered Squared, as well as creating multiple Dance Films for Hubbard Street Dance Chicago.  Over the past decade Schultz has been asked to compose, arrange, and perform scores for multiple pieces of dance at Hubbard Street Dance Chicago.