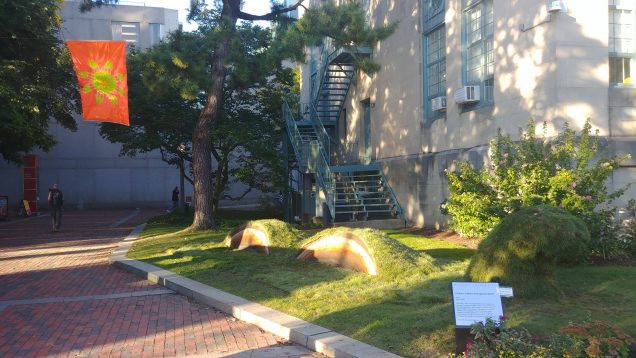 Public art installation at the east corner of the George Sherman Union Plaza (775 Commonwealth Ave.) From October 8 to October 25, 2021

Created by Erin Genia, a member of the Sisseton-Wahpeton Oyate, this installation explores the concept of cultural emergency, which was developed by during her artist residency with the City of Boston’s Office of Emergency Management. Genia created the Cultural Emergency Response framework as a way to examine and implicate the cultural roots of a vast array of interconnected and existential crises using the methods and materials of emergency management, translated through a critical Dakota lens.

The installation consists of an earthen sculpture of the water monster, Unktehi, that emerges from the ground, showing the layers of fill beneath our feet, illustrating the relevance of ancient and ever-present stories that shape peoples’ relationships to land, water and life systems. A flag bearing the Morningstar, powerful Dakota iconography illustrated in fluorescent colors, flies above to draw attention to the land as a cultural emergency ground zero site.

Unktehi is a terrible creature that lived in bodies of water in ancient times and created danger for humans. The monster appears in Dakota ohankanan (origin stories) describing ancient climate change and upheaval. In this sculpture, Unktehi is being disturbed and is reawakening in a place that should be a pteǵa (wetland), because the water and the web of life it supports is being desecrated.

During Boston’s rise as a colonial city, as Indigenous people were being ethnically cleansed from this land, the site Boston University occupies – a salt marsh and estuary of the Quinobequin river system – was being filled in to make way for development by settlers.

As the threat of impending sea level rise grows as climate change advances, this work explores the impacts of colonialism on the present moment. What are the harmful philosophies that drive the systems, institutions and individual behaviors of people that were set into motion by colonization? And, what can we do to address our current state of cultural emergency? 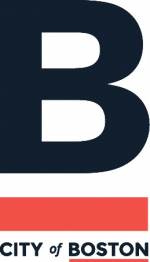 This project is supported by a Transformative Public Art grant from the City of Boston Mayor’s Office of Arts and Culture.

Erin Genia, Sisseton-Wahpeton Oyate, is a multidisciplinary artist, educator and community organizer specializing in Indigenous arts and culture. Genia’s work in these areas is focused on amplifying the powerful presence of Indigenous Native American peoples on the occupied lands of America in the arts, sciences and public realm to invoke an evolution of thought and practice that is aligned with the cycles of the natural world and the potential of humanity.

Genia’s artistic practice merges Dakota cultural imperatives, pure expression, and exploration of materiality with the conceptual. Erin is fluent in multiple modes of expression: sculpture, fiber, sound, performance, digital media, painting, printmaking, jewelry and ceramics. She has degrees from the MIT Program in Art, Culture and Technology and The Evergreen State College.

As a community organizer, Erin combines the creative process with civic practice and was a 2020 artist in residence for the City of Boston, working with the Office of Emergency Management, where her project, “Cultural Emergency Response,” creatively repurposes disaster planning methods to address complex issues like climate change, institutional racism, ecological destruction and economic inequality from a decolonial lens. As part of this work, her speaker series, Confronting Colonial Myths in Boston’s Public Space,  featured local Indigenous leaders and artists speaking about how monuments in the city contribute to the public health emergency of racism.

Erin maintains a traditional Dakota arts practice in canupa iŋyan/pipestone carving, and was awarded the 2021 Traditional Arts Apprenticeship Grant from Mass Cultural Council. She is an advocate for Native American cultural issues and has worked in the field of Indigenous arts and culture as a writer, scholar, administrator and teacher. Her recent article, “Dislodging the Cultural Infrastructure of Indigenous Peoples’ Dispossession,” appeared in the winter 2021 issue of the Boston Art Review.

Erin was named a 2019 artist in residence at the Urbano Project, where her first solo show, “Okonwaŋzidan” was reviewed in the Boston Globe. While at Urbano, she taught the program “Stories of the Land” where youth artists developed ways to respect the land in an urban environment through their own histories, cultures and experiences via an exploration of sculpture, sound and performance.

Genia’s work also explores the intersections of Dakota philosophy and technology, and her piece, Canupa Inyan: Falling Star Woman, travelled to the International Space Station in 2020 as part of Sojourner 2020, a project of the MIT Space Exploration Initiative.

Erin’s work in public art includes commissions for the Minnesota Historical Society, the City of Saint Paul, and the City of Seattle Office of Arts and Culture. Erin is a co-founder of Centering Justice: Indigenous Artists’ Perspectives on Public Art, a project of the New England Foundation for the Arts Public Art Team that seeks to disrupt harmful historic narratives and present critical perspectives on the social justice dimensions of public space.