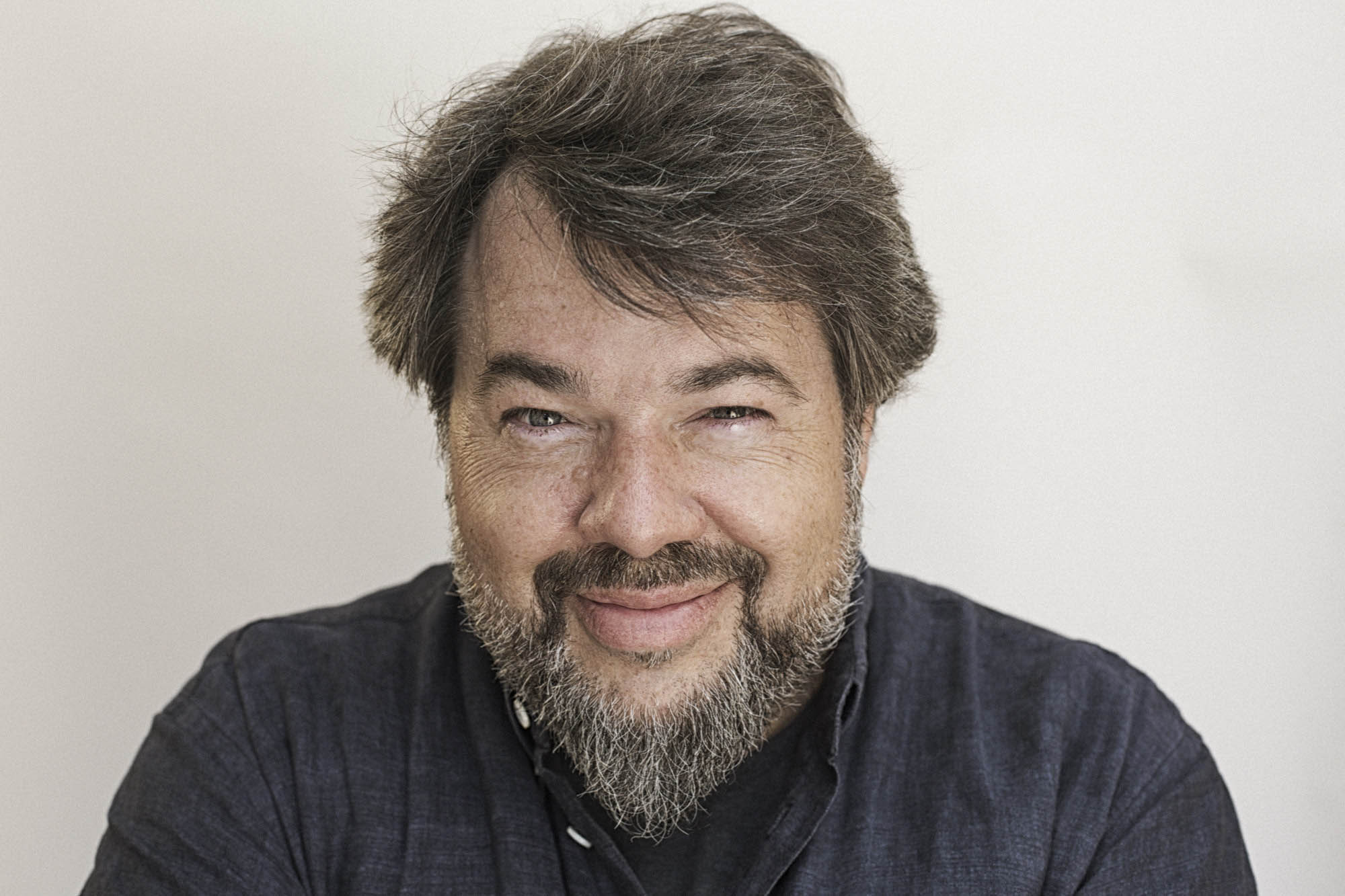 Music supervisor Thomas Golubić (COM’93) says he sometimes gets to build character playlists for actors and directors to help them think about the characters they play in a certain way. Photo by Ashley West Leonard

What’s It Like to Be a Music Supervisor for a TV Show? Just Ask Thomas Golubić (COM’93)

Can you remember a time you heard a song used in a movie or television show and couldn’t get it out of your head? Recent examples like the Cramps’ Goo Goo Muck playing during the dance scene in Wednesday or Running Up That Hill saving Max’s life in Stranger Things have given those 1980s hits new life decades later.

Thank the entertainment industry’s music supervisors, who oversee all music-related aspects of a project. They identify and select the right song to set the mood for a television show or film, collaborate with composers and songwriters, and work at licensing preexisting songs, among other tasks.

When done correctly, these audio detectives find just the right song for a moment that often will be forever burned in the viewer’s mind. While this may sound like an easy assignment, music supervisor Thomas Golubić says it often involves “going through hell,” scrolling thousands of songs in a music library or securing rights.

Golubić (COM’93) is founder of Super Music Vision, a leader in the music supervision industry, and his team has worked on shows such as Breaking Bad, Better Call Saul, Six Feet Under, and The Walking Dead. Now hard at work on the new AMC show Anne Rice’s Mayfair Witches, Golubić says for years the job of music supervisors was neither fully understood nor appreciated.

To address that, he helped establish the Guild of Music Supervisors, and in 2017 became president of the organization. That year he led the charge for his peers to be recognized by the Academy of Television Arts & Sciences and compete in a new category, music supervision, for TV’s highest honor, the Emmy Awards. He has earned four nominations himself (along with two Grammy nominations for record producing). Golubić, who was a DJ, music programmer, and on-air radio host during his early years, says he loves how his career gives him a chance to look “through my collection of music and [think] about how I want to paint a [television] scene, and the rhythm of it.”

Bostonia talked with Golubić about how he got his start in the field, some of his favorite music picks, and how he approached his newest project, Mayfair Witches.

Bostonia: You studied journalism at BU. How did you go from that to working as a music supervisor?

Golubić: I went to BU’s College of Communication way back in the late ’80s, and early ’90s, and during that time the war in Yugoslavia started. My father is from Zagreb [Croatia’s capital], which was part of Yugoslavia.

So, even though we didn’t have family there, I was very interested in what was going on, and that moved me from my film school efforts into journalism. So I went over and worked there from 1991 to 1992, and then I came back to the States. I tried to do an internet magazine in Los Angeles, which was a disaster. I stumbled into radio, which led to stumbling again into music supervision.

Bostonia: How many projects are you and your team at Super Music Vision typically working on at one time? How do you divvy up duties?

Golubić: There are four of us, and looking at the board to my left, I see nine projects. They’re all in different levels of production. The problem with music supervision is it’s a really poorly paid profession, and so we have to do a lot of projects to keep four people employed. And the projects are complicated enough that to do the jobs that are really high level, you need to have four people to handle the different responsibilities and make sure nothing slips and everything gets done properly.

And so it’s this constant battle between having to hire more people and collaborating, being efficient with that work, and at the same time being able to handle projects and give them the love, attention, and care that they need.

Bostonia: What’s the favorite duty you take on?

Golubić: I love the creative side of it—this is why I do it. I love storytelling, I love watching the scene and figuring out the beats of it and what it’s trying to communicate and thinking about the characters.

I like looking through my collection of music and thinking about how I want to paint that scene and the rhythm of it—that’s the part that I love. Everything else I do in order to be a successful professional with high-quality control, but that is sort of the compromise to me. TV is among the best, if not the best, form of media these days. And I get to work with, and gain the trust of, those people. I try to do my best to deliver something that’s interesting. That’s such a gift, you know?

Bostonia: At what point in a project do you get involved—when writers are starting to write an episode, when they’re filming, afterward?

Golubić: Very early. Usually, we get brought on board when scripts are being developed, and they’re still putting together the writers’ rooms.

We start on ideas as early as we can, and then basically once we’re in production, we have to deal with getting anything cleared, helping them have music available for on-set playback, and sometimes we build character playlists for actors and directors so they can think about the characters in a certain way when they’re writing them. I love doing that.

Bostonia: This is probably like asking you to choose a favorite child, but what is your Better Call Saul favorite musical moment?

Golubić: Oh my God, there are so many. One of them, which I just love because it was one of those moments when you’ve tried lots of different ideas and finally land on something that feels inspired, is the yodeling song that we had in the episode with the ants and ice cream. We could have put almost anything in there, in the sense that [the audience] was just looking at an ice cream cone on the ground and ants. We know that Jimmy McGill is going into the underworld. He’s losing his ethical values, he’s losing his hold on Jimmy McGill, and is turning into Saul Goodman. That opportunity yielded this wonderful yodeling song from a Swiss mountaineering group from the 1980s and there’s this beautiful song that just happens to be a part of my collection of music. It [represented] that he thinks of himself as a mountaineer, and he’s trying to climb the mountain of the criminal empire, and he will get lost in it.

Bostonia: When you’re poking around for songs, do you ever make notes reminding yourself that this song might work for a later episode or even a show you’re working on next?

Golubić: Absolutely. I have organizational tools, and a lot of times those ideas never yield anything, but they help lead you to another idea. It’s a little bit like bread crumbs—you have to follow the bread crumbs, and sometimes the wind blows a couple of them away, but you see where they’re all headed to. And that helps you get to the right idea, the right answer.

Bostonia: Do you ever want to use a song, but can’t find who owns the rights to it, maybe because it’s so old or obscure? What do you do then?

Golubić: You go through hell! This is why I have a team of three people; they’re so talented and if I don’t have the resourcefulness or the bandwidth to look for the song properly, I know that they will find a way and they will dig in a way that I probably couldn’t.

Thoroughness is such a huge part of the job, and when you’re able to do the investigative work and find a songwriter who had long left the industry and never saw money, and you suddenly get a chance to call them and say, ‘Look, you can be part of this wonderful piece of contemporary art, and we’d love to license your song and send you some money.’ That can be such a rewarding and wonderful thing, because I know that money means something. For some people, that licensing happens right when they are figuring out if they want to keep working or get a different job, and [the money] gives them just enough space to push a little harder, you know?

Bostonia: Tell us about your work on your new show, Anne Rice’s Mayfair Witches.

Golubić: Working on the show has been tremendous fun, and it looks like AMC has another hit on their hands after the success of Interview with the Vampire. For the first episode, there was a lot of story to cover, and we found that featuring immediately recognizable songs by the Rolling Stones and Marvin Gaye made for efficient storytelling and world-building.

We feature indie artist Torii Wolf and her song “Summon” at the end of the episode, which is more reflective of the musical approach as the series moves forward, especially as we go to New Orleans and get deeper into Rowan’s personal story. Composer Will Bates did a fantastic job establishing the “witchy” tone of the series, and his main title is currently released as a single, with a full soundtrack album to follow.

Bostonia: What’s next for you and your team?

Golubić: This will be a busy month for us. In addition to Anne Rice’s Mayfair Witches, we also music-supervised the second season of Showtime’s Your Honor, which features Bryan Cranston as a disgraced judge, and our first project with writer/director Rian Johnson (Knives Out, Glass Onion), Poker Face, which will be released shortly on Peacock and stars Natasha Lyonne. I think Poker Face reflects the most ambitious work we’ve done since Better Call Saul. It’s going to be an exciting year ahead.

What’s It Like to Be a Music Supervisor for a TV Show? Just Ask Thomas Golubić (COM’93)

What’s It Like to Be a Music Supervisor for a TV Show? Just Ask Thomas Golubić (COM’93)
0
share this