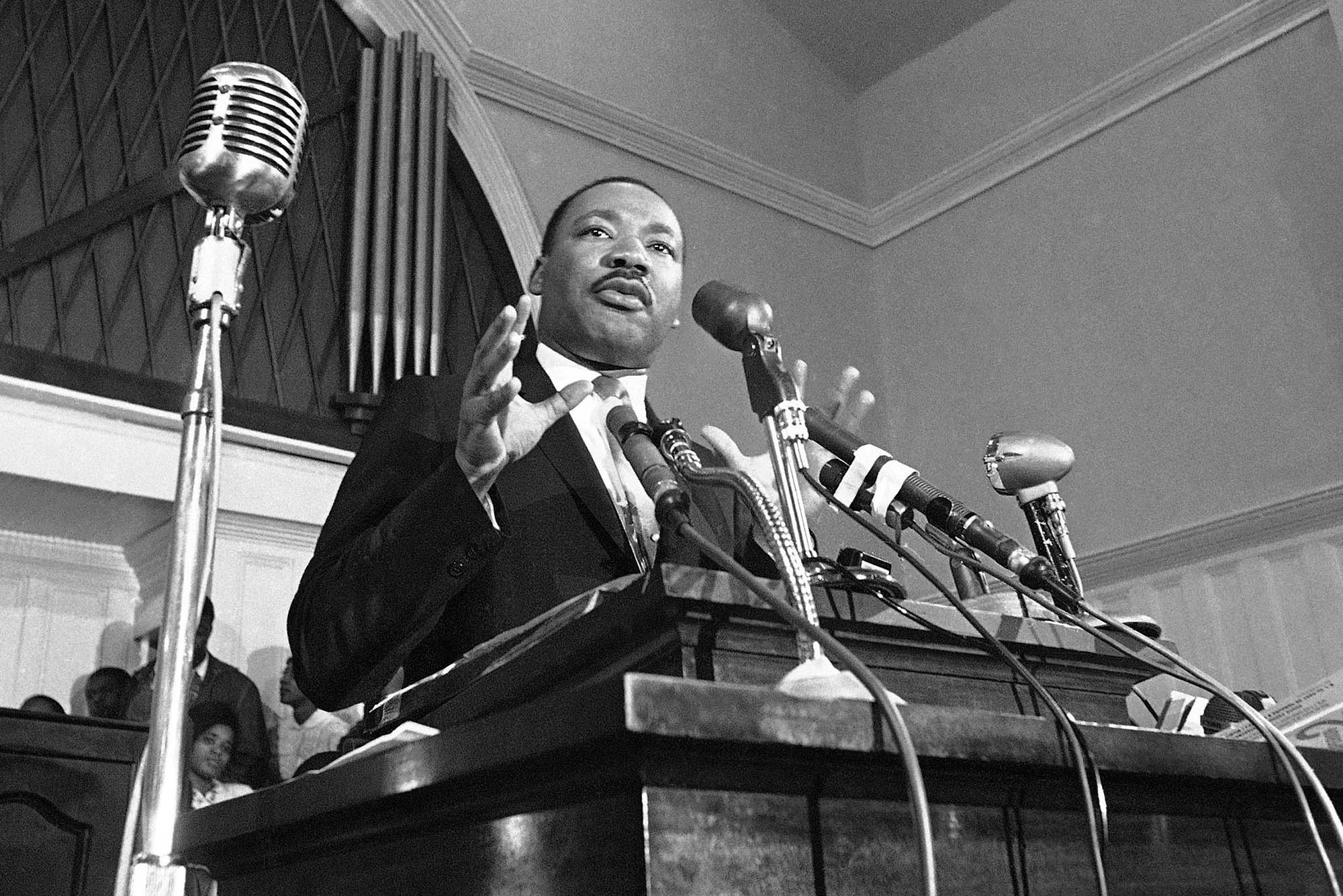 Monday’s campus observance of Martin Luther King, Jr. Day will be the first in three years to be held in person. Photo by AP

Some embraced pacifism, he noted; others—the “hippies” who sought to detach from society—“cannot survive as a mass group because there is no solution in escape”; and a third group had become “armchair revolutionaries who insist on the political and psychological need for violence.” King suggested instead “a stage of massive, active, non-violent resistance to the evils of the modern corporate society” that cobbled together the best from all three groups:

“From hippies it can accept the vision of peaceful means to a goal of peace, and also their sense of beauty, of gentleness, and of the unique gifts of each man’s spirit. From the radicals it can adopt the burning sense of urgency, the recognition of the need for direct and collective action and the need for strategy and organization. And because the emerging program is one neither of anarchy nor of despair, it can welcome the work and insights of those young people who have not rejected our present society in its totality.”

BU’s observance of King’s birthday this year borrows its theme from this “New Sense of Direction” speech.

The 90-minute celebration of King’s and his wife Coretta’s legacy begins at noon Monday, January 16, at the George Sherman Union, 775 Commonwealth Ave. For the second year in a row, Boston Mayor Michelle Wu headlines the event, which will be held in person after two years of COVID-induced virtual observance. Those who can’t attend in person may watch the event, cohosted with the city of Boston and the New England Conservatory, here.

King’s speech “served as his assessment of the Civil Rights Movement, showcased his keen understanding of younger generations, and communicated his strategic vision for the future of the Movement,” says Jason Campbell-Foster, interim associate provost and dean of students, another event speaker. “Unfortunately, the world that Dr. King spoke of in his address is not unlike the one we have in 2023, and the text serves as a still-relevant call to action. While we have made progress in notable ways, the fight for urban and economic justice continues to remain as germane as it was 55 years ago.

Unfortunately, the world that Dr. King spoke of in his address is not unlike the one we have in 2023.

“As a university, we believe in the power and capacity of young people to represent and stand for change, as Dr. King did, and will use this opportunity to reflect on his legacy and inspire us to be active and engaged participants in the quest for a more equitable present and future,” Campbell-Foster says. “For the first time since 2020, the annual celebration returns to an in-person format, and along with it comes the deeply missed feeling of fellowship and camaraderie with our friends in the city of Boston and at New England Conservatory.”

The event will include a conversation between Derrick L. Williams, professor of communication studies at Ohio’s Cuyahoga Community College (Tri-C), and Nick Bates, interim director of BU’s Howard Thurman Center for Common Ground. Williams, who calls himself the “Blue-Collar Scholar,” is the son of an ironworker and a day care educator; King became his hero during Williams’ childhood in an Alabama coal-mining town.

Bates crafts equity and inclusion programs based on the work and philosophy of Thurman (Hon.’67), a mentor to King as dean of Marsh Chapel in the 1950s. Thurman was the first Black dean at a mostly white American university.

Boston Poet Laureate Porsha Olayiwola will conduct a reading at the event, which also will include music performances by students from BU and the New England Conservatory. Among the other speakers are: Conservatory President Andrea Kalyn; Andrea Taylor, BU’s senior diversity officer; and Victoria Sahani, BU associate provost for community and inclusion and a School of Law professor.