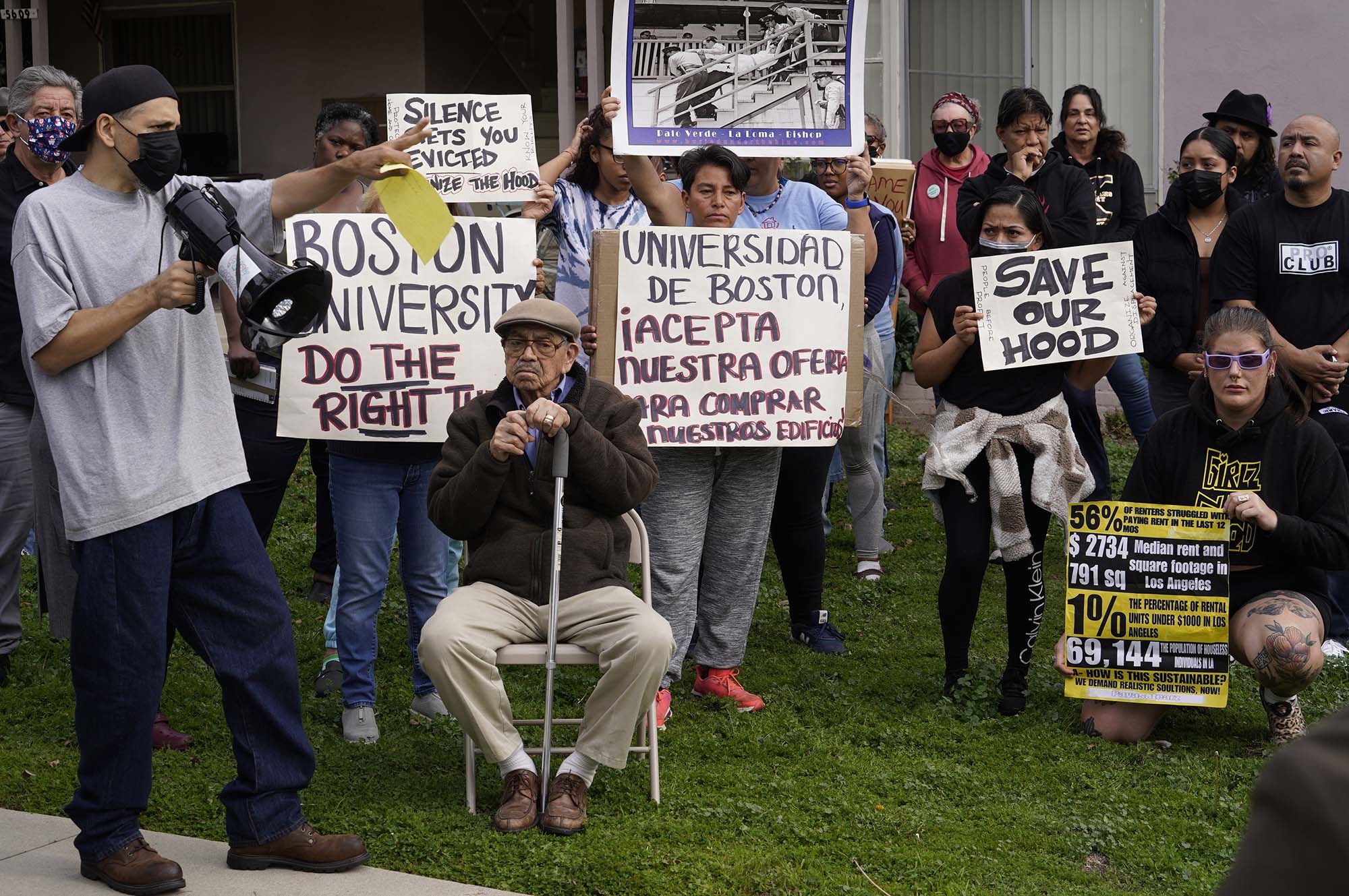 Tenant Jose Lopez (far left) spoke to a rally last month in opposition to his BU-owned apartment buildings in Los Angeles being sold to a private investor; the University has agreed tentatively to sell the structure and three others to a trust representing the tenants. Photo by AP/Damian Dovarganes

Boston University tentatively has agreed to sell four Los Angeles apartment buildings to an affordable housing land trust, allowing 130 tenants to remain in their homes and quelling a social media firestorm that had erupted over the properties.

The buildings were bequeathed to BU by Frederick Pardee (Questrom’54, Hon.’06), a University benefactor who died last June at 90. The University had agreed to sell three of the buildings to tenants in partnership with the Liberty Community Land Trust, but complaints arose over the pending sale of the fourth building housing 40 people to a private buyer. Those tenants feared eviction amid skyrocketing housing costs in the area and demanded that the sale to the trust include all four buildings.

Liberty Community Land Trust, founded in 2019, is a Black-led nonprofit that preserves and develops affordable housing for Los Angelenos of color. It’s part of a network of community groups that trace their roots to a bank founded a century ago by Black Los Angeles businessmen to give home loans to African Americans shunned by white-run lenders.

“Boston University has agreed in principle to the proposals from the group representing the current tenants, and will move forward with working with them on official purchase and sale agreements for all four properties,” says Derek Howe (Questrom’92), BU’s senior vice president for operations.

Before his death, Pardee—who gave his alma mater $50 million to found and endow the Frederick S. Pardee School of Global Studies—had operated a real estate management company in LA. The four buildings—two-story structures dating to the 1940s—are on Clemson and Corbett Streets in the city’s Baldwin Hills section, a working-class neighborhood that has seen rents rise at escape velocity in recent years.

The tenants had protested outside of their homes against any potential sale other than to the Liberty Community Land Trust. They’d also taken to social media to make their case. In response, several platforms filled with denunciations of any sale to another buyer.

“Boston University has entered an agreement with the Liberty Community Land Trust to sell us 3 of our 4 buildings,” one tenants’ TikTok video had said “But our demands have always been to buy ALL FOUR BUILDINGS. BU is on track to sell this last building to a speculative buyer. Which means that nearly 40 people are still at risk of being evicted and made homeless. We demand 100 percent of our homes, not just 75 percent of them!”

The opposition made it back east to campus. BU’s Young Democratic Socialists sided with the tenants, posting on Instagram, “BU enters an agreement for 3 buildings with Corbett-Clemson Tenants but the fight isn’t over.”

When news of the fourth property emerged, the agreement in principle to sell all four buildings to the land trust earned a rave tweet from its secretary-treasurer, Damien Goodmon: “What a start to a week! Two properties taken away from speculators & brought into the hands of our community land trust. Call us the #SpeculatorSlayer.”

Like Boston and other US cities, LA has an affordable housing crisis, fueled in large part by a lack of supply. The Boston Globe reported that monthly rents in the BU-owned buildings, in an area that’s home largely to people of color, max out at $1,700, as compared with a new, nearby development that charges between $3,000 and $10,000.