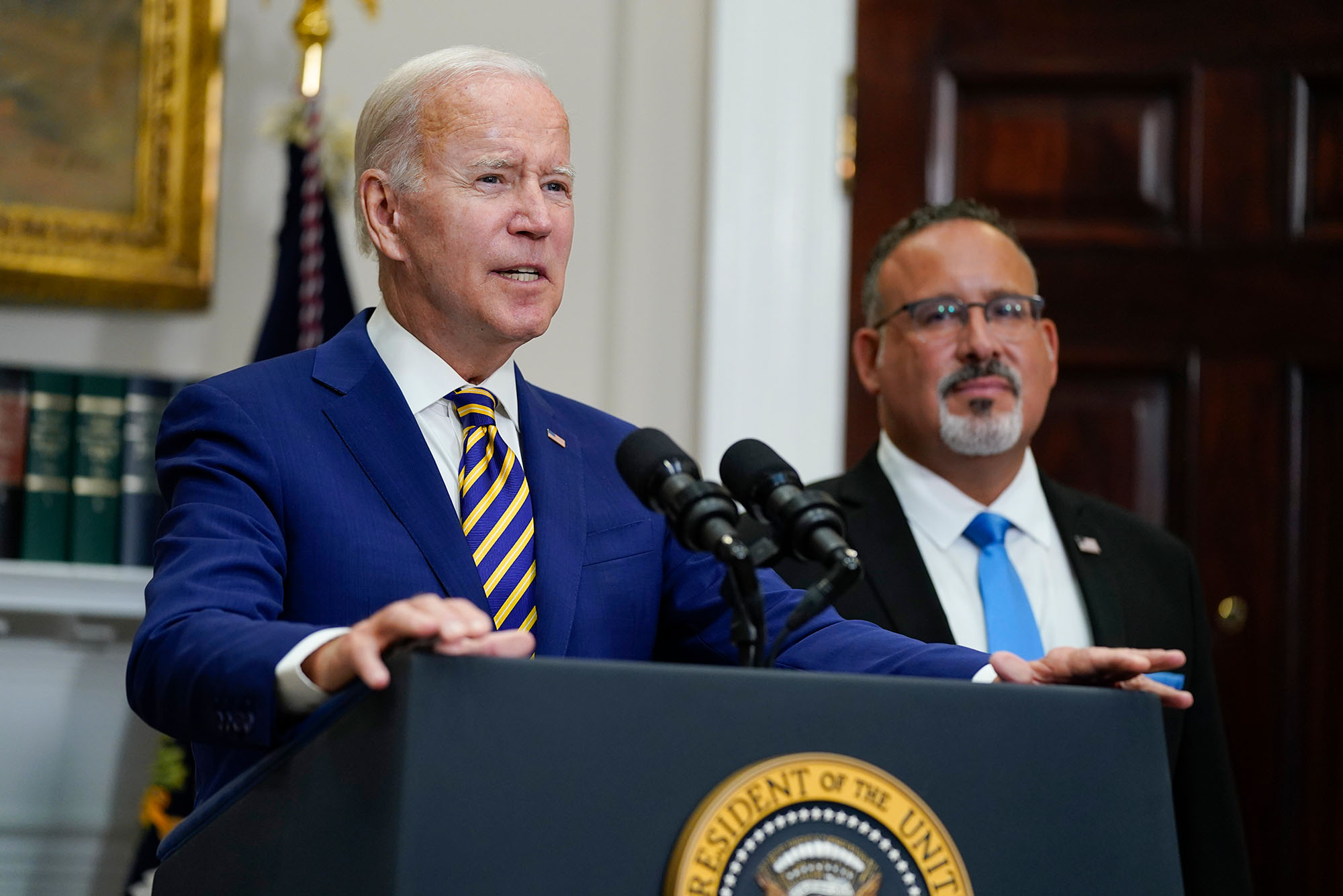 A BU School of Law visiting professor is skeptical that the White House’s argument is valid, even if the intentions are good

When President Biden announced last week that the federal government would cancel billions of dollars in student loan debt, Jed Shugerman says he was not surprised—the news had been anticipated for months. But what did surprise the Boston University School of Law visiting professor is the legal argument Biden’s administration used to justify its action.

In a memorandum explaining the decision, the White House cited the HEROES Act, which was passed in 2003 in reaction to the 9/11 attacks. The memo argued the HEROES (Higher Education Relief Opportunities for Students) Act gives the education secretary authorization to grant students relief from loan requirements during specific times of crisis, such as wartime or national emergencies. “In present circumstances, this authority could be used to effectuate a program of categorical debt cancellation directed at addressing the financial harms caused by the COVID-19 pandemic,” the memo says.

That, Shugerman says, is (to borrow a Bidenism) malarkey. There were better arguments to use, he says, and he is skeptical the action would stand up in court if a legal challenge were to be filed. Shugerman, who is a Fordham University professor of law, will teach tort law and administrative law in the presidency at LAW. He also says that while he supported some form of student debt relief, he did not support the use of executive powers by the president to achieve it.

BU Today spoke about the issue and the debate with Shugerman, who has written extensively about the use of executive powers by presidents. Under Biden’s proposal, the federal government would forgive up to $20,000 per borrower, if the borrower earns less than $125,000 a year or lives in a household where total earnings are less than $250,000 annually. And although current college students are eligible for debt relief under the proposal, the amount would be capped if they are still being claimed as a dependent. (In order to qualify for the $20,000 forgiveness, borrowers must have received a Pell Grant in college and meet certain other requirements.)

BU Today: What was your initial reaction to the news from the Biden administration?

Shugerman: I think there are two procedural points to make. I support some form of means-tested student debt relief. Similar to what is proposed. I am sympathetic to this, especially on means testing. And there is another crack at this. This is the Biden administration announcing a start to this, but they are not locked into the arguments they are making.

I think it’s a loser argument with the [John] Roberts [conservative-leaning] US Supreme Court. The Roberts court has already indicated in three different decisions that it has a different approach to major questions and that it’s skeptical of COVID being invoked in a broad way to achieve policy goals.

BU Today: So you think the COVID argument is what weakens the government’s argument?

Shugerman: The Biden administration has relied heavily on narrow textual analysis of a couple of words. Individuals affected by an emergency. That’s really broad. Anyone with student loans has been affected by COVID. And COVID is clearly an emergency. I understand that argument. But the Roberts court has said that it does not apply textual methods to major question cases. It’s not as simple as pointing out a word like affected. Or emergency. People read that in different ways.

The Biden administration should have foreseen this and had counterarguments, which turn on not just narrow text, and a couple of words, but on context, purpose, and legislative history.

BU Today: So, the HEROES Act is where you see a problem?

Shugerman: Right. The problem with the HEROES Act of 2003 is it is clearly about 9/11 context. Even if it says emergencies might be broader than 9/11, the Roberts court will see COVID as a stretch.

The OLC memo on Biden’s order cancelling student debt is weak. The rationale is COVID emergency, but it does not even mention Roberts Court rulings against eviction moratorium & vaccine mandate.

I don’t see this order surviving a legal challenge.https://t.co/ePFtkIVJ4M

BU Today: Don’t you think the Biden administration had to know this?

BU Today: Why is that important?

BU Today: If you agree with the premise of the Biden administration’s decision, but not the method, what would you have done differently?

Maybe there is a valid argument about the HEROES Act to be made. But they needed to dig deeper. Maybe they missed something. But there is another road. I have looked at a provision under the Higher Education Act of 1965. There is a very broad, nonemergency-based provision that allows the Department of Education to waive debts.

Other experts expected this to be the basis for President Biden. Section 432(a) of the Higher Education Act of 1965 gives the education secretary the authority to modify, “compromise, waive, or release any right, title, claim, lien, or demand, however acquired, including any equity or any right of redemption.”

It’s puzzling why the Biden administration wanted to invoke COVID as a stretch of the 9/11 act when they had an actual basis from the Higher Education Act. It’s odd. Maybe their experts found something in the legislative history. But it’s unbeknownst to me. No one has explained that. It is odd.

But there is time. I hope they listen to critics on the left who support this policy. And the best path is to improve the arguments they are making or shift to this other statute. There is still time to do that.

Jed Shugerman is a professor at Fordham University Law School and a visiting professor at BU School of Law. He received his BA, JD, and PhD (history) from Yale. His book, The People’s Courts (Harvard University Press, 2012), traces the rise of judicial elections, judicial review, and the influence of money and parties in American courts. It is based on his dissertation, which won the 2009 Cromwell Prize from the American Society for Legal History.

There are 15 comments on Would Biden’s Student Loan Forgiveness Plan Survive a Court Challenge?