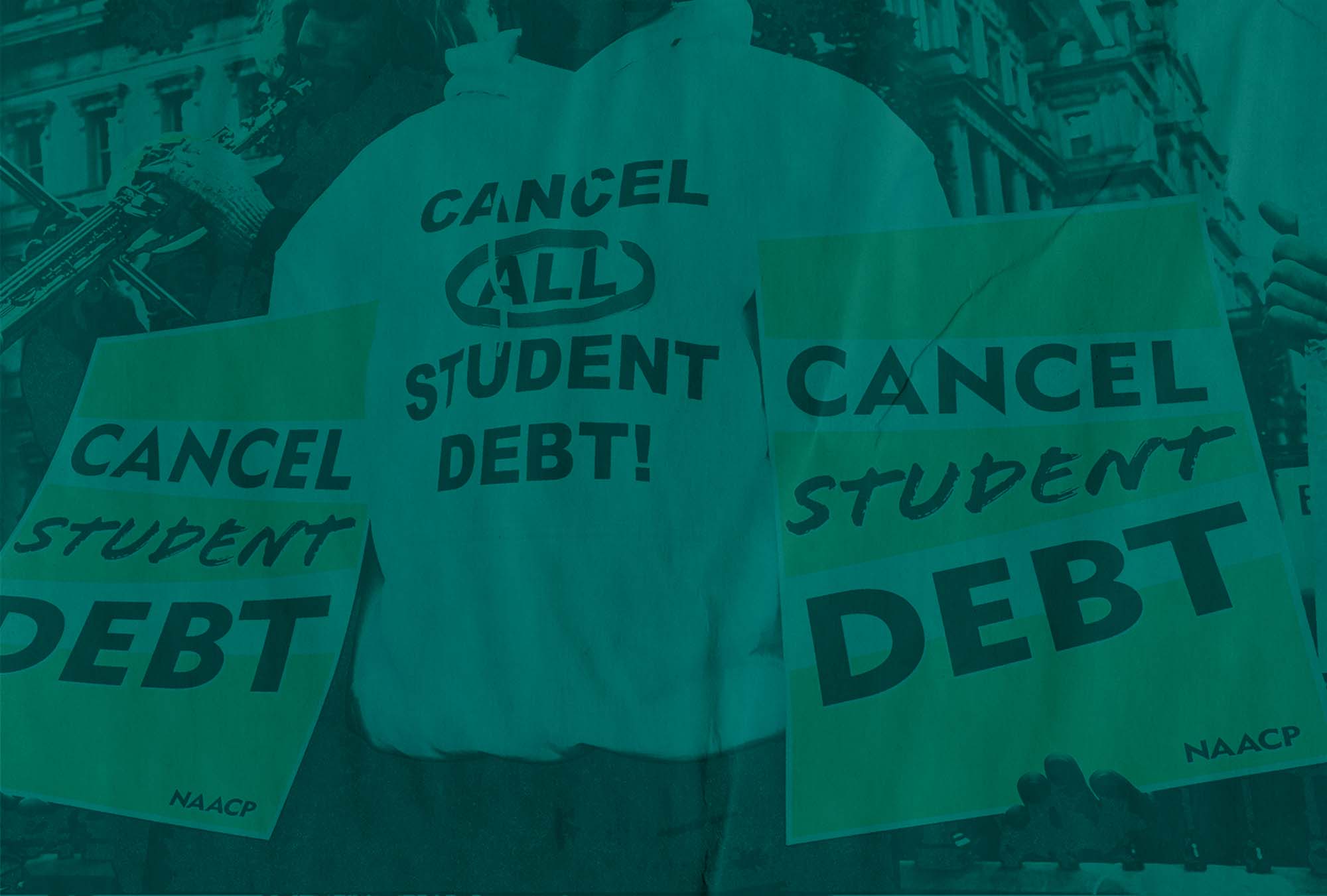 Mark Williams, Boston University Questrom School of Business executive-in-residence and a master lecturer in finance, considers if, and how, President Biden would forgive student loans. Williams, who has written about this subject previously, discusses who is impacted most by student debt, the politics of student loan forgiveness, and the effects of the current COVID-19 student loan pause.

President Biden campaigned on student loan forgiveness, promising to relieve up to $10,000 in debt per borrower. A year after taking office, Biden has yet to make good on his promise and is facing increasingly loud calls from advocates and members of his party to cancel student loan debt before the midterm elections.

Back in December, Biden did provide some temporary relief to borrowers when he extended the pause on federal student loan repayments through May 1, 2022. The pause on payments was first implemented in March 2020 under the CARES Act, and later extended by the Trump administration.

In this episode, BU Today executive editor Doug Most talks to Mark Williams, executive-in-residence and a master lecturer in finance at Questrom, about the politics surrounding student loan forgiveness, and if and how Biden will forgive student loans.

Doug Most: Mark Williams, thanks for joining us today. I wanted to talk to you about this question of politics first, and whether or not Biden should forgive, could forgive, or will forgive all, or none, or some of the debt.

Mark Williams: Right, and Doug, that’s a great question. It’s really a $1.7 trillion question and it’s all about politics.

On one side, President Biden has the progressives, including Senator [Elizabeth] Warren, who is asking for a $50,000 per loan forgiveness. And Biden had gone on the campaign trail and continues to agree to only a $10,000 forgiveness.

Newsclip: [Biden, as a candidate, speaking] “I proposed, and in the House Nancy [Pelosi] put it in the plan, to immediately provide $10,000 in debt relief and stimulus right now.”

Williams: It’s a huge difference; $50,000 forgiveness per loan would actually take away 80 percent of the debt, over a $1 trillion worth of the debt. The Biden idea of $10,000 per loan would give and take away about $400 billion. It’s still a big number, but there’s a big difference between the two groups.

Most: Who’s impacted the most by student debt—what kind of person are we talking about here?

Dental school is almost $300,000. And nurses, if they go to graduate school, it’s almost $50,000 in average college debt. So these are individuals that are providing a lot to society as well, and yet they’re burdened by the student debt, which impacts their decision-making.

Most: Is one of the issues he is facing on the political side sort of a generational thing? Is there concern from people who won’t have their debt forgiven of how they’re going to react to the news that colleagues or other people are having their debt wiped out? How much does that play into this, do you think?

Williams: Well, I think it does play a lot into it because there’s over 45 million borrowers that have student loan debt. And these are borrowers of different ages. I mean, the average age of borrowers’ indebtedness is around 35. But yet, we still have a group of about 10 percent that are 60 years old and older. These are parents that secured debt for their kids, and they’re still actually sitting there on the hook and having to pay that debt off.

Most: Can you talk about the social impact of this debt? Is one of the big incentives, perhaps, for the Biden administration that they believe that forgiving this debt will pay off in the long haul? That it will allow them to take that money and put it elsewhere into the economy? Is that the hope and the incentive here?

Williams: Well, I think really COVID exposed the credit crisis that we have within debt. When we think about student debt, it’s now the largest category, with the exception of mortgages. It’s surpassed credit debt, that is, credit card debt. So I think the thought is, look, the average debtor, with student debt, they’re paying roughly $400 a month, so roughly $4,800 a year. That money itself could go towards other things.

For example, maybe towards rent, maybe towards starting a new business, maybe towards a mortgage. Leading into COVID, we saw roughly 25 percent of borrowers were either late in payment or actually were delinquent in payment. So it’s a significant issue and it impacts FICO scores for students and their ability to get credit in the future.

So there’s a lot riding on this. I think financial health is a big issue, as well as sort of we’re learning more studies about mental health related to the financial consequences of having this burden, which can average 20 to 25 years for many of these student borrowers.

Most: Can you talk briefly about how the current COVID-19 student loan pause may have affected borrowers and how it’s sort of impacting their behavior?

Williams: Right. The pause itself was first started in March of 2020. And that pause has been actually hit five additional times. It’s been extended in six-month periods all the way out through May of this year. And what that’s done is given relief, in a sense that interest is not accruing on these loans, which is very positive.

Payments aren’t being made, which actually gives more cash flow to these individuals. However, the concern is once the obligation is required to be paid again, will this cash flow be there? Or will we see an increase in the amount of defaults, which actually impact borrower credit ratings and could have other detrimental impacts on their financial health?

Williams: Well, if we think about the amount of debtors, so we have 45 million debtors; another way of thinking about it is 45 million voters. If he relieves, for example, $10,000 worth of the debt, that’s 15 million people he’ll make happy.

Most: It reminds me of that great scene in Ghostbusters when Bill Murray is trying to convince the mayor to solve the problem of the ghost. And he says:

Bill Murray speaking in Ghostbusters: “Lenny, you will save the lives of millions of registered voters.”

Most: It’s a similar sort of situation for Biden perhaps, where all those voters will have their debt forgiven, and Democrats might see this as sort of a big win for them.

Williams: Well, it’s a real tangible thing. I mean, Biden has been trying to push several initiatives through and he’s really come up short, so this could be a win for him. The challenge, though, is that it’s not just an executive order. Many have argued that it’s got to be a congressional agreement for this to be done.

Most: Is the money there? You mentioned $1.7 trillion at the beginning of this. Do you think there would still be a win if he did just a fraction of it or a portion of it, or would it be sort of muted and therefore maybe not even worth the effort?

Most: We’d probably be remiss if we didn’t acknowledge that here we are talking at Boston University, which is a school that is not inexpensive to attend. Can you just talk briefly about how we got here in the first place and is there a way out?

Williams: Sure. Well, I think we got here in part because since the 1980s, tuition has increased eightfold relative to wages. So in a sense, students that were going to a state school or even a private school leading up to the 1980s, you could have a summer job, you could save, and tuition was much more reasonable than it is now.

So debt became a bigger issue. We also had cuts as a result of the oil embargo of 1979, federal cuts that started in California and swept the nation, which reduce the amount of state funding that was received. That put greater pressure on universities across the United States to increase tuition costs. And that was all borne by students themselves.

Most:  And do you see a way out of this?

Williams: I definitely see a way out of it. I think it’s really twofold. The first is greater financial literacy. It’s really hard to imagine that a 17- or 18-year-old really knows their critical career path or actually how much debt they should take on and how to pay that debt back.

I mean, this is a decision that 17- and 18-year-olds are making with their parents sometimes. And it’s something that lasts 20 to 25 years. That’s concerning. So I think the first step is better financial literacy at the high school level, especially career counseling. Not all students really should go on to college.

Some of them actually would be well fit for trade school in particular or going to community colleges or state universities, which have a lower tuition cost than private universities. So I think there needs to be greater discussion on the front end before students take on this excessive debt.

Now, where we are today, the debt itself is at $1.7 trillion. It’s going to increase in the next five years to almost $3 trillion. So it has to be addressed. Right now Congress makes it illegal to actually extinguish these loans due to bankruptcy. So, in essence, what I’m saying is that students carry this debt to their death if it can’t be extinguished.

So it’s a very unusual obligation to have, and that’s concerning. So I think there’s got to be better, and more, flexibility with lenders, more flexibility with universities in coming up with ways in which to attract top students that won’t create excessive debt. And then ultimately, the government really has to, and including the president, has to extinguish some of this debt.

Most: I appreciate you taking the time to answer some of these questions. I think it’s an important conversation, and it’s obviously a timely and very topical conversation happening right now in the political climate. So thanks for the time, Mark.

Williams: Yeah, Doug, what’s really interesting, you got me the dust off an article that I wrote two years ago and it appears as if it was written yesterday.

All the best to you.

Most: Thanks, Mark, we’ll talk to you soon; you too, take care.

Ferrante: Thanks to Mark Williams for joining us on this episode of Question of the Week. This episode was hosted and edited by BU Today executive editor Doug Most, engineered by Andy Hallock, and produced by me, Dana Ferrante.

Thanks for listening and see you in two weeks.

How Much Did US Insurers Waste on Ivermectin for COVID?

There are 4 comments on Will President Biden Forgive Student Loans?

Will President Biden Forgive Student Loans?
Question of the Week Podcast
4
share this