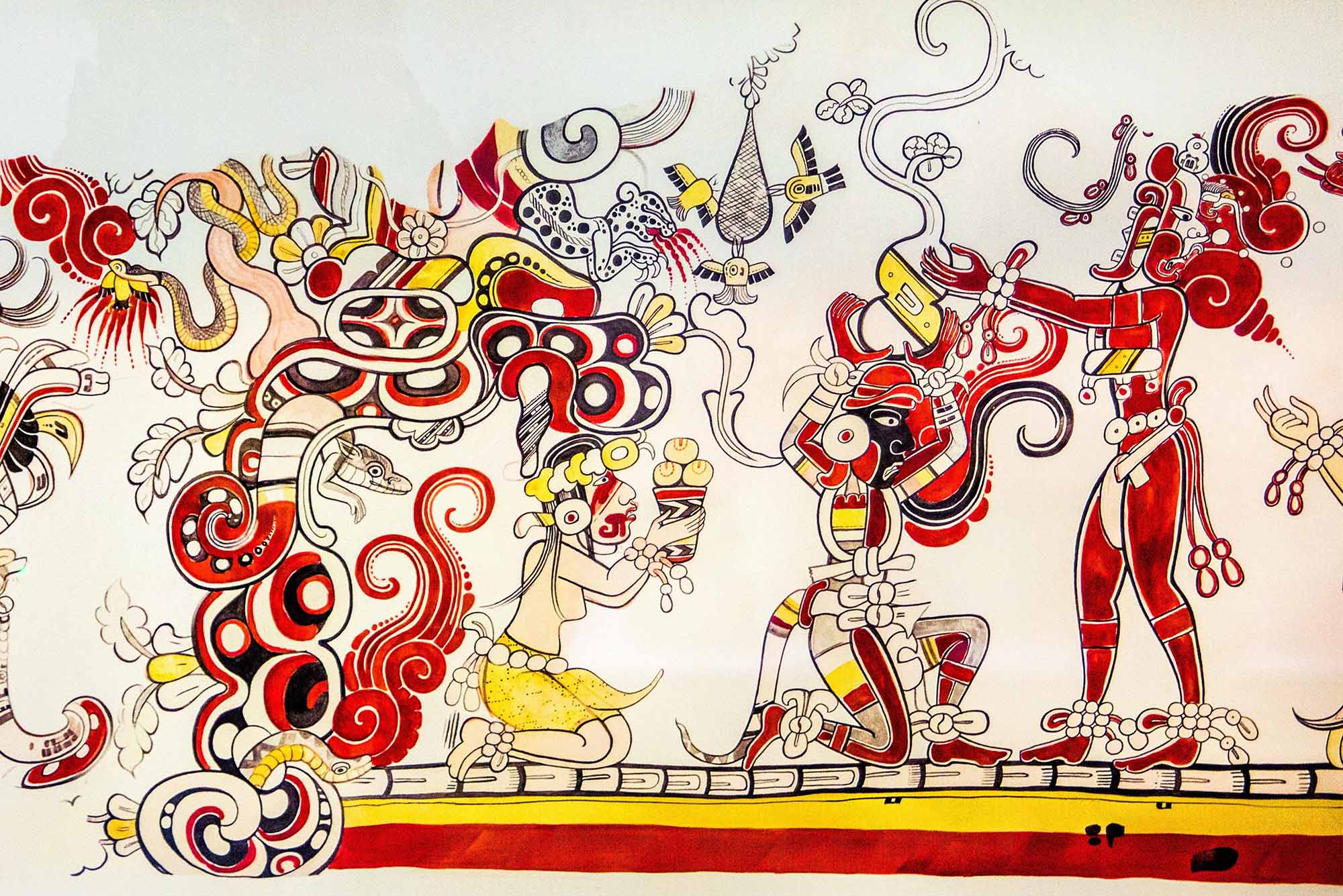 In two pits dug into the limestone of San Bartolo, Guatemala, archaeologists discovered evidence of latrines and nixtamalization, a process essential to making tamales. In this reconstruction of an ancient mural found at San Bartolo, a kneeling Maya makes an offering of tamales to a god. Photo via Popol Vuh Museum/Alamy

What Ancient Toilets Can Teach Us about Maya Life—and Tamales

Ancient toilets and trash pits are like heaven to archaeologists. They might not have the glamor of a gleaming medieval jewel or intricate Roman mosaic, but they brim with clues about the everyday life of bygone civilizations: the detritus—and discharges—of our ancestors telling rich stories of what the past was like for those without palaces or chests of gold. From the mundane and the messy, archaeologists can spin tales of what people used to eat, how they kept clean (or not), what illnesses they had, and what they treasured (and what they didn’t).

In two small circular pits that were dug into the corner of a home in central Guatemala more than a millennium ago, archaeologists have discovered new insights into the lives of the Maya people, including how they turned maize into tamales and what they used to flush indoor toilets; they also found parasites that may have left the Maya plagued by bouts of nausea, weakness, and diarrhea.

In a study published in the Journal of Archaeological Science, researchers from Boston University, Harvard University, and the University of Texas at Austin reveal how the pits were full of maize starch spherulites, a microscopic byproduct of nixtamalization—a food preparation process essential to making tamales and tortillas, where corn kernels are soaked and washed in an alkaline solution of water and lime. Because the pits were also dotted with parasitic worm eggs from human feces, the archaeologists think the Maya were using the pits as latrines, flushing their toilets with lime water leftover from making tamales.

“We have both the earliest documented evidence for nixtamalization and the earliest evidence for toilets in the Maya world,” says John M. Marston, a BU College of Arts & Sciences associate professor of archaeology and anthropology.

He’s been hunting for at least one part of that evidence since 2020, when he and a former student Emily S. Johnson (CAS’17)—now a graduate student at the University of California, Santa Barbara—invented a method for spotting nixtamalization in residues left behind on cooking pots and grinding stones, as well as in archaeological sediments. According to Italy’s University of Gastronomic Sciences, nixtamalization—which gives maize newfound elasticity and unlocks nutritional superpowers, boosting its levels of calcium and niacin (vitamin B3)—was “the secret to pre-Hispanic nutrition.”

The Brink spoke with Marston, who directs BU’s archaeology program, about digging into history’s toilets, what tamales can teach us about ancient diets, and what else they found in the Guatemalan pits.

The Brink: Your study focuses on a chemical process used by the ancient Maya to improve the nutritional value of maize, which your paper calls a “culinary process that fundamentally changed Mesoamerican diets.” What’s the history of that process, how does it work, and why is it so important?

Marston: This is a practice that arises in multiple different societies where their agricultural systems were based on maize, so you find it in Central America, also in North America. The way in which people prepared maize and used it culinarily differed in different regions, but the chemical fundamentals of this process remained the same. The idea is that by soaking the maize in this alkaline solution, it causes a chemical change to the maize that makes it both more nutritious, but also changes the plastic qualities of the dough you can produce out of it. In North America, we find this tradition in a hominy—soaked maize kernels that swell and are used as these whole seeds that can be ground up and made into maybe a cornbread or eaten whole in a soup. And we see that in some traditional dishes in American Southern cuisine still today. In Central America, however, it’s very much directed toward grinding the kernels and creating doughs out of them—and that’s the dough that’s used to make tortillas and tamales. In tortillas in particular it enhances the plastic quality of the dough—it allows you to make this bread out of that substance which, for a material that doesn’t have gluten in it, is a pretty remarkable change. There is clear evidence going back to the earliest Spanish contact, when we have our first historical and pictorial records, that many societies in Central America are using this process to make tamales and tortillas, and that this is the basic foundation of their culinary traditions.

The Brink: How can you tell from an ancient piece of maize that it’s undergone this process?

Marston: This was the open question. There had never been any documentation outside of these early Spanish contact historical and pictorial records that showed the use of tamales and tortillas, yet we knew that this process existed at that time. If you go back into earlier iconographic records, we have some examples from the Maya world that predate Spanish contact where we do see depictions that indicate that they’re using these tamales. The problem is that nobody ever had a way to detect the actual residues, the remnants of this process, and that makes it very difficult for us to go further back in time, to see how ubiquitous this was. The depictions we see in the Maya world, for example, only show up in palaces and places like that, so we don’t know the extent this was part of everyday life. What we came across was the idea that this chemical process changes the structure of the starch molecules that form the nixtamal, this transformed dough, a particular signature that shows they’ve gone through this nixtamalization process.

The Brink: What do you know about the pits where you found the samples?

Marston: These features are called chultunes, and it basically means something like a pit, a rock-cut pit. These are ubiquitous features across many areas of the Maya world. What’s now the Yucatan Peninsula has a very soft limestone bedrock, and it’s quite easy to carve into it, and people carved into it for a variety of reasons. We know that many of these features were probably cisterns—they were using them to store water from the rainy season for the dry season. But that’s not the case everywhere for the Maya world, so they do seem to have a complicated set of uses. There have been clear cases where people have been using them in a ritual way, so they probably represent access to the underworld, which is an important part of Maya cosmology. In other cases, they’re probably used as much more mundane storage or trash pits. In this particular case, because we were looking through the microscopic remains, we found these remains of eggs of tapeworms that must have come from human feces, which led to the supposition that these were used as latrines, as well. That’s something that’s been theorized in the past, but nobody’s ever come up with direct evidence for it.

The Brink: So, are the grains you found things that people have eaten and, ahem, passed? Or a by-product from when they were grinding them up?

Marston: We don’t actually know for certain how well these particular structures, called spherulites, are preserved if they pass through the human gut. But we do know when you make the nixtamal by taking this alkaline—in the case of the Maya, they’re using mineral lime—and you’re adding your dried maize kernels into it and soaking it, heating it, you end up with this liquid. The liquid is very alkaline, it’s caustic and it has to be rinsed off of the kernels before the kernels are used. It’s a mildly toxic waste product, so what do you do with it? Our supposition, based on the fact that these have evidence for being used as latrines, is they were using this perhaps to flush the toilets. And the reason for thinking that is because today in many parts of the world, if you have an outhouse pit-style toilet, one of the things you can do to reduce smell and insect activity is to dump powdered lime into it, because it will prevent biological activity. And so it’s quite possible that this was a convenient way to get rid of this excess solution and reduce the smell from an interior toilet.

Marston: This site, San Bartolo, has several phases of occupation, but the phase from which these chultunes date that we excavated is the Classic period. The Classic period of the Maya is called that because it’s when we see the construction of the biggest cities, the biggest monuments. It’s probably the eighth or ninth century AD, and that’s the time at which this city has reached its largest extent. The Maya have this very long and rich culture, and this is just simply one period when they built all these cities. Often the way we think of the Maya today is that they were these ancient people who built giant cities and then disappeared—and, of course, they were around for a long time before that and they’re still around today.

The Brink: Is being an archaeologist always this glamorous, digging into latrines and trash pits looking for clues to the past?

Marston: Actually, there is nothing that archaeologists like finding more than latrines, toilets—they are one of the best contexts. No matter where you’re working in the world, no matter what time period you’re working on, it’s gold, because you can learn all these amazing things. You can find remains of things that went through humans that can give us primary evidence of what people ate. And in this case, we found those tapeworm eggs, which is something else that comes out of a human gut. The other thing that happens is that people often lose things down the toilet and don’t go down and pick it up, so you might find small valuable objects that people have lost; you also might find trash, because it’s going to be a place to throw some trash every once in a while. Archaeologists who work in historic New England spend all their time working in privies. I’ve worked on some Roman toilets during my research in Israel and Turkey and, again, great stuff you can find.

What Ancient Toilets Can Teach Us about Maya Life—and Tamales