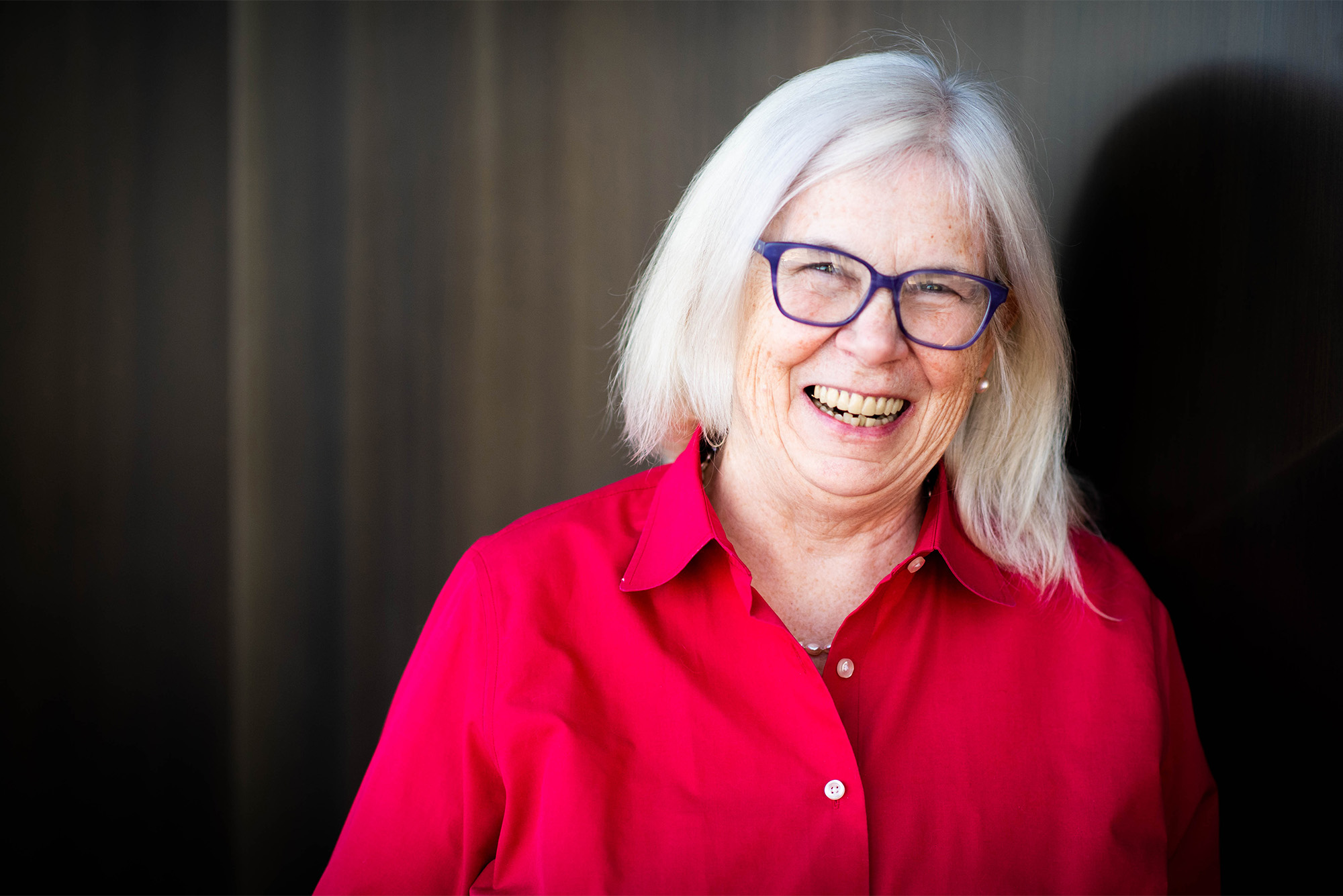 School of Law Professor Constance Browne is this year’s winner of the Metcalf Cup and Prize, BU’s highest award for teaching. Photo by Jackie Ricciardi

William Holt, her grandfather, was born in a women’s prison outside Boston in either 1887 or 1888. His mother had been incarcerated—no one is sure why. Then, when Holt was three or four years old, he was taken by rail to Maine with other orphans intended to become farm laborers. Did his mother consent to letting him go? No one knows that either.

Eventually Holt landed with a family in North Waterford who treated him well, though it seems he was never adopted. He graduated from Bowdoin College and the Medical School of Maine, becoming a cancer researcher and the kind of beloved country doctor who would accept payment in chickens or produce from patients who had no money to spare.

“He has always been my heart and my hero,” says Browne, a Boston University School of Law clinical professor of law. “Devotion to others was at the core of his being.” That same devotion, to her students, is one reason Browne has been named this year’s winner of the Metcalf Cup and Prize, the University’s highest award for teaching, to be presented at BU’s Commencement on Sunday, May 22.

With her grandfather’s example in mind, Browne’s approach to teaching involves all aspects of her students’ development. “I understand that I am teaching them not only legal principles and procedures,” she wrote recently, “but all that goes into the practice of law.”

Browne joined LAW in 1982, as a part-time instructor in the First-Year Writing Program. She has long taught in the Civil Litigation & Justice Program clinic, supervising students as they represent low-income clients in unemployment, disability, housing, and other cases through Greater Boston Legal Services. She is known among her students for her kindness and care in helping them learn to write, speak, and think like lawyers.

“Professor Browne does not just integrate social justice teachings into her work; her work is social justice,” her former student Nina Datlof (LAW’18), now a clerk for a US District Court judge in Pennsylvania, wrote in support of Browne’s nomination.

“Professor Browne loves teaching, she loves her students and community, she is committed to justice, and it shows,” says Angela Onwuachi-Willig, dean of LAW.

Browne’s students in the Civil Litigation & Justice Program have handled approximately 400 cases for clients from the Boston area who are often from traditionally marginalized groups. Her reach also includes the innovative Lawyering Lab, the Student Trial Team Program, and Effective and Ethical Depositions, her popular seminar that employs multiple simulations.

Students speak of her patience and care in developing their confidence through crucial skills in writing, negotiation, advocacy, and ethics. “Had I not learned from Professor Browne how to carry myself in court and advocate for my clients,” one student told the selection committee, “I would never have made it through my first few years as a lawyer.”

“Professor Browne’s spectacular teaching is all the more impressive because of the very large amount of teaching she does,” Onwuachi-Willig, Ryan Roth Gallo & Ernest J. Gallo Professor of Law, says. “She not only teaches and directs live clinics, where she is training students how to represent clients in real live cases, and she does it all brilliantly. On top of that, she also teaches other classes, including two sections on effective and ethical depositions and an advanced legal writing course. Teaching so well while teaching so much is truly extraordinary.”

Sitting in her small Law Tower office overlooking the Charles River, Browne is pleased by the Metcalf honor, but not especially eager to talk about herself. She’d rather talk about her students, or the clients they help, or her grandfather.

He was grounded in small town values formed in spite of his hardscrabble beginnings, she says, and he cared deeply about those whose lives and welfare he was responsible for. Browne, 72, got to know him when she was a little girl, before his death in 1955.

“For me, he made such an impression, because in his presence I felt, and was nourished by, these values,” she says. “The values and attitudes fostered by family and community, of luck and good fortune, of optimism and merriment.

“He really served people,” she says. “He was this community person, both in the little town of Bridgton—he had a summer place in North Bridgton—and in Portland, where he mostly practiced, and I felt that from him. Dr. Bill, everyone called him. People would come up to me throughout my life and talk to me about him.”

“People may not remember what you say to them, but they will remember the way you made them feel.”

Browne grew up mostly in Bridgton and earned a BA in English from the University of Maine at Portland-Gorham (now the University of Southern Maine). She thought she was going to be an English teacher until she started a graduate program in counseling that took her to London. “I was doing kind of street social work, and reading a lot of new books and just looking at change and justice,” she says. “And I never finished, I never took the final exam, because I said, ‘I want to be a lawyer’ right in the middle of all that.”

She thought she could do more good as a lawyer than as a teacher. “So I ended up teaching law, putting the two of them together.”

She earned her law degree from Boston College Law School, where she was an articles editor of the Law Review. She worked in the Boston suburb of Melrose, in a storefront practice with a friend and her friend’s father, a lawyer who had retired from a large firm and now “practiced for the love of the law.” Soon she was teaching part-time at BU and eventually joined the faculty full-time.

In the Civil Litigation & Justice Program, second and third-year law students act as first-chair counsel in cases under her supervision. It’s her task to teach them how to practice law, but also how to have confidence in their abilities and how to present themselves in court and in related situations such as negotiations and depositions.

How does she do it? “I think in part by being myself, trying to have a genuine conversation with them in the very beginning,” Browne says. “We do a confidential self-assessment with them, asking what they’re scared about, what they’re good at, what they’re worried about. They’re all worried they’re going to make a mistake, which calms me down, because you want somebody that is concerned with that. We specialize in giving them support.”

In many cases, the dollar amounts involved may be low, but the stakes are high for their clinic clients.

“Having a housing case and somebody possibly becoming homeless is really terrifying, and it’s hard for me still, which is why we work so hard not to have that happen,” Browne says. “Things have changed, and there’s no safety net anymore, people are very destitute.

“The students self-select. They don’t have to take the clinical program. So I immediately have enormous respect for them, because they put themselves out there for people who are really vulnerable,” she says. “I really care about how the clients end up—and how the students end up.”

Jade Brown (LAW’16) worked as Browne’s legal assistant on a complex employment discrimination case during her third year at BU.

“Although the case was daunting, I was impressed by Connie’s positive attitude and her incredible way of approaching even the most challenging legal problems in a thoughtful and pragmatic way,” Brown wrote in support of Browne’s Metcalf nomination. “There is a saying that people may not remember what you say to them, but they will remember the way you made them feel. I can’t remember all the nuggets of wisdom that Connie imparted on me that year, but I remember how she made me feel—capable.”

After her own Commencement, Jade Brown became a staff attorney at Greater Boston Legal Services. She is now a clinical instructor in the Civil Litigation & Justice Program—working alongside Browne and her other former teachers.

A gift from the late Arthur G. B. Metcalf (Wheelock’35, Hon.’74), a Board of Trustees chair emeritus and former professor, funds the Metcalf Cup and Prize and the Metcalf Awards for Excellence in Teaching, created in 1973 as the University’s highest teaching awards. The Cup and Prize winner receives $10,000; the Award winner $5,000. A University committee selects winners based on statements describing nominees’ teaching philosophy, supporting letters from colleagues and students, and classroom observation of the nominees.

The winner of this year’s Metcalf Award for Excellence in Teaching is Leslie Dietiker, a Wheelock College of Education & Human Development associate professor of mathematics education. The Metcalf awards will be presented at the University’s 149th Commencement on May 22.

Teacher and Lawyer, Constance Browne Is Driven by Social Justice
0
share this