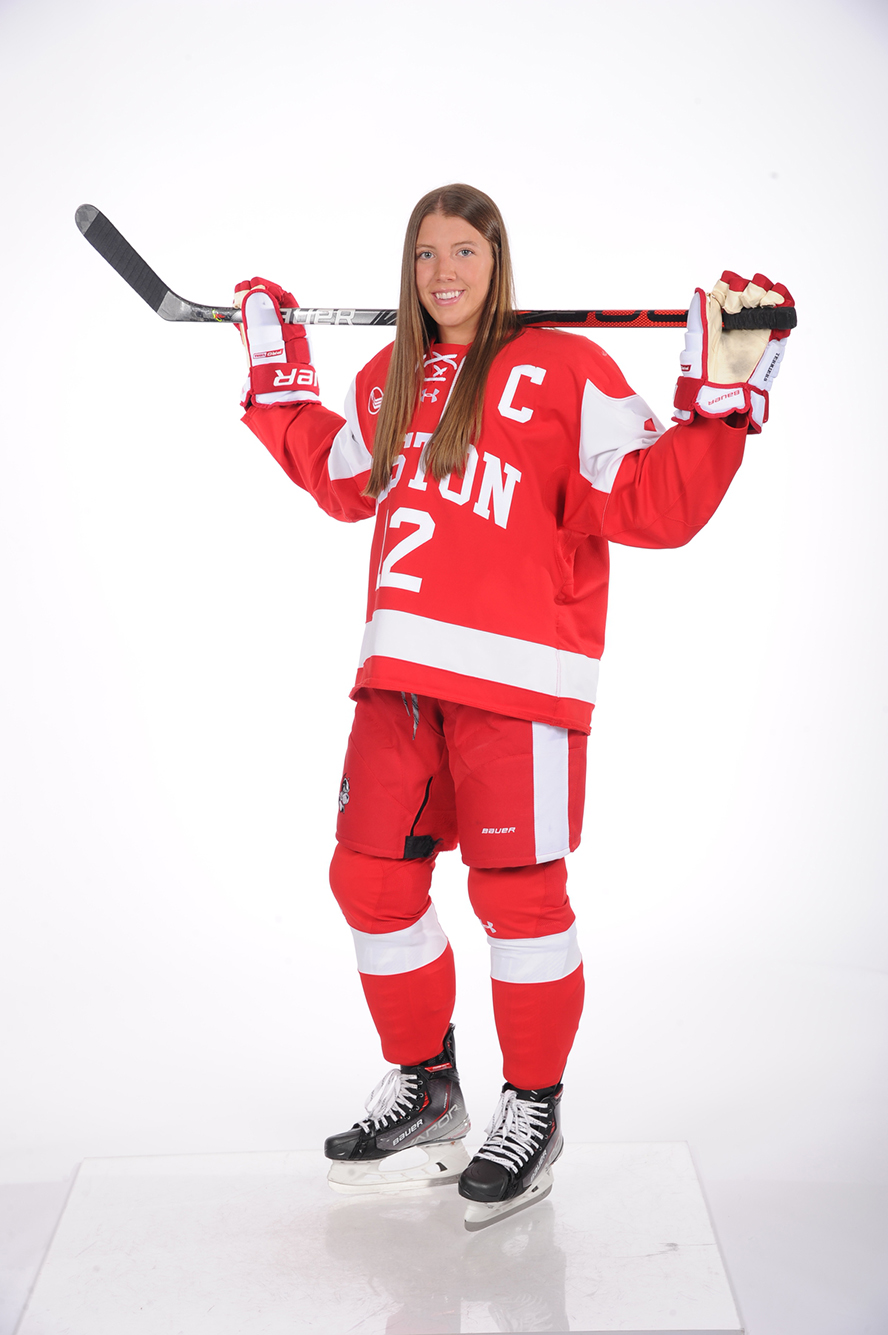 In addition to being captain of the women’s hockey team, biology major Kaleigh Donnelly (CAS’22) has been named to Hockey East’s All-Academic Team twice. Photo by Steve Babineau

As Women’s Hockey Prepares for the Beanpot, Terrier Senior Captain Reflects on the Season

Kaleigh Donnelly on the team’s strong showing, the end of her BU career, and what the future holds

Kaleigh Donnelly has seen it all in her four years with BU women’s hockey, from the highs of winning the 2019 Beanpot to the lows of two first-round playoff exits. This year, the Terriers are 9-8-4 overall and 8-5-3 in conference play, consistently placing as one of the top teams in the Hockey East standings.

As team captain and one of eight seniors on the roster, Donnelly (CAS’22) has played the fifth-most games (98), recorded the third-most points (42), and tallied the most assists (36) among the current Terriers. Moving into the second half of her final BU season, she says she hopes that the best is yet to come.

BU Today spoke with Donnelly about the team’s bounce-back season from a 6-6 record last year, the players who have driven their success, her BU career on the ice, and her goals for the future.

BU Today: After being an assistant captain last season, what has it been like being captain this year?

Kaleigh Donnelly: So far, it’s been pretty good. I got pretty lucky with the girls on the team—they make my job very easy. I’ve enjoyed every second of it.

BU Today: Most teams name multiple captains or assistant captains, but you’re the only one on this year’s team. Have other teammates stepped up to support you in that role?

Kaleigh Donnelly: Definitely, especially my senior classmates. They’ve really helped me behind the scenes and working on things that maybe you don’t see on the ice.

BU Today: One of them is Courtney Correia (CGS’20, Questrom’22), whose 8 goals, 8 assists, and 16 points lead the team and rank her among the top-10 players in Hockey East. What can you say about the way she has played this year?

Kaleigh Donnelly: I think everyone’s really excited about how well Courtney’s doing. She really takes the team in her own hands some games and gets those points for us. I think we really look to her when we need a goal.

BU Today: Another noteworthy senior, Kate Stuart (CAS’22), a first-choice goalie for the first time in her career, has the fifth-best save percentage (.926) of Hockey East goalies in conference play. What have you seen from her this season?

Kaleigh Donnelly: Kate has always been really good, and I think all her hard work for the past three years has paid off with her starting role this year. Last weekend, she stopped almost 50 shots against Northeastern and kept us in that game. That’s just one example of her talent.

BU Today: A number of underclassmen have also contributed  significantly: Christina Vote (CAS’25), Catherine Foulem (CAS’24), and Julia Shaunessy (CAS’24) each rank among the program’s top-10 skaters in goals and points this year. What’s it been like watching them develop?

Kaleigh Donnelly: I love watching them play, and I especially love playing with them. They’re even better kids off the ice, which I think helps the dynamic of the team. It was super important for the underclassmen to step up since we do have a pretty young team.

BU Today: Your team went unbeaten in its first seven conference games and has remained near the top of the league all season. What do you attribute that success to?

I think it really transfers from off the ice. We’re a really close team, and we all really respect each other as individuals, which I think transfers to on the ice and respecting ourselves as teammates and working well together.

BU Today: Two of your best games so far were a 2-1 win over then–No. 2 Northeastern October 8 and a 5-4 win over Boston College November 21. Do those victories give your team confidence going into the Beanpot on February 1?

Oh, definitely. I think what’s different this year than previous years is that we know we can beat them now, and I think that confidence will help us in the tournament.

BU Today: As playoffs approach, what do you anticipate for the team?

Especially now with everyone playing at their best, especially our goalies, I think the potential is endless. I see us going pretty far and I hope that we do.

BU Today: As you complete your biology degree, what are your post-Commencement plans?

I’m planning on working at Dana Farber Cancer Institute in a clinical research coordinator role, so I’m pretty excited about that.

BU Today: And do you think more hockey is in your future?

It’s definitely something to figure out down the road, but I did just talk to Karilyn Pilch (Questrom’09,’19) [former director of hockey operations at BU]—she used to be general manager with the Premier Hockey Federation’s Boston Pride [she’s now a scout for the Chicago Blackhawks]. So there’s definitely a possibility.

BU Today: Finally, do you have any favorite memories from your four-year career with the Terriers?

One memory definitely stands out—my freshman year when we won the Beanpot. I was lucky enough to be on the ice in overtime and when Sammy [Davis] (CGS’17, Sargent’19, Wheelock’20) put that in. It was definitely the best moment of my career.

The BU women’s hockey team’s next game is a rematch with No. 3 Northeastern at Matthews Arena on Friday, January 21, at 4 pm. The game can be streamed on CollegeSportsLive.com and followed via @BUGameDay on Twitter. Fans can keep up with the team on GoTerriers.com and @TerrierWHockey on Twitter.

As Women’s Hockey Prepares for the Beanpot, Terrier Senior Captain Reflects on the Season

As Women’s Hockey Prepares for the Beanpot, Terrier Senior Captain Reflects on the Season
0
share this