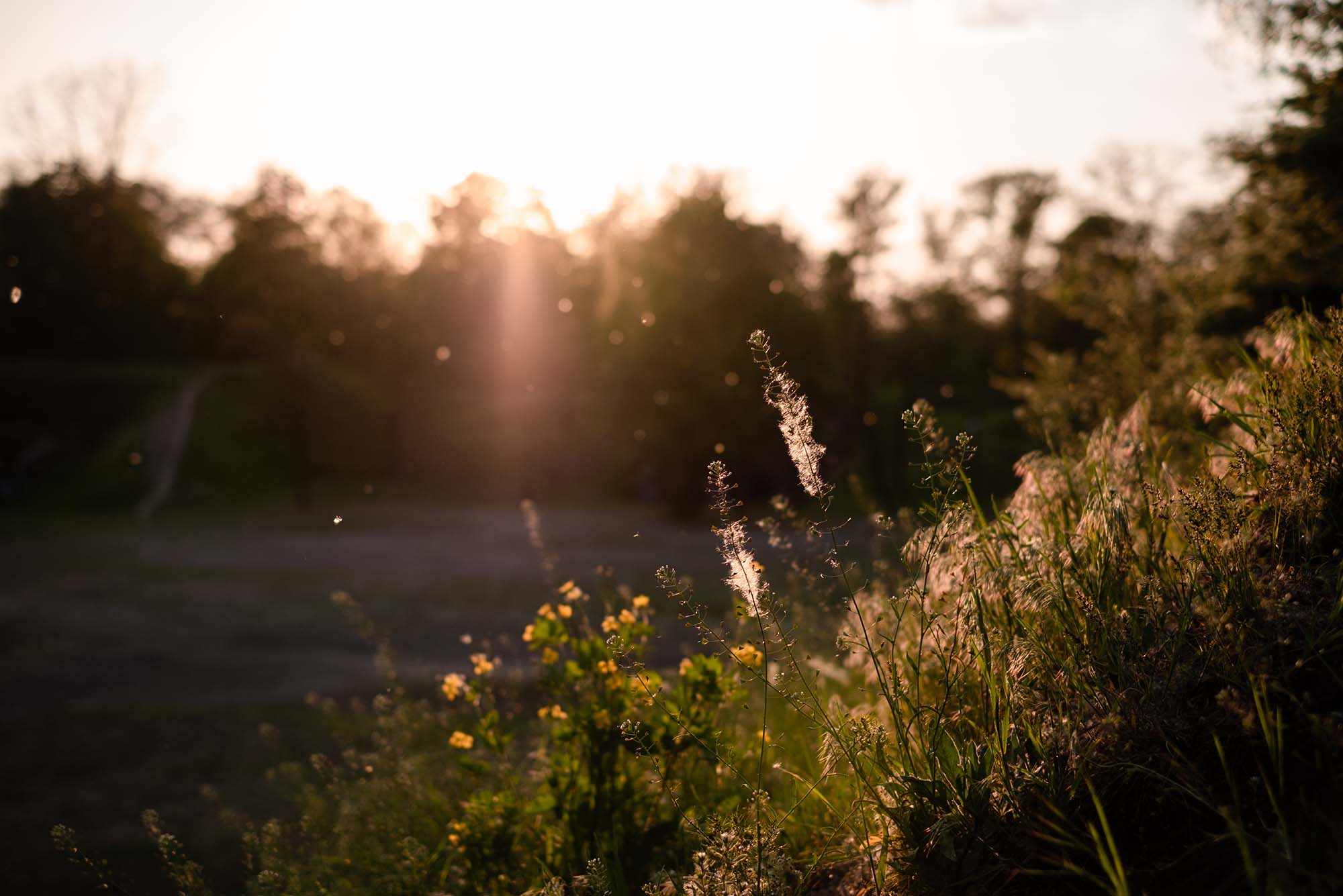 One reason for the spike in seasonal allergies this year? Grass pollen counts reached higher levels earlier in the season compared to other years. Photo by Freestocks/Unsplash

No, You’re Not Imagining It: Seasonal Allergies Are Worse This Year

It’s that time of year again—you’re sitting outdoors enjoying the sunshine, when all of a sudden, you start to feel…itchy. Within an hour, that itch has turned into a full-blown sneeze attack complete with watery eyes and congestion, and now you’re running to the nearest pharmacy to buy some Zyrtec.

Seasonal allergies—or an allergic reaction to the tree and grass pollens that float around in the spring and summer, known as allergic rhinitis—affect nearly 60 million people in the United States every year. This year, they’re particularly bad in the Northeast, which can be attributed to factors such as climate change and recent dry spells, says longtime allergist Fred Little, a Boston University School of Medicine clinical associate professor of medicine and the director of the Boston Medical Center allergy-immunology fellowship.

We spoke with Little about how allergies work and what you can do to cut down on the sneezing, itching, and watery eyes.

BU Today: So, what are allergies, exactly?

Fred Little: Allergies are an abnormal immune response to normally harmless substances that are in the environment. Allergies aren’t like other diseases, such as cystic fibrosis or sickle cell anemia, where there’s a very strong hereditary [component]. Allergies are a mix of heredity and environment.

What’s basically involved [for nonfood allergies] is that one becomes exposed to allergens in the environments that are part of normal day-to-day living. These harmless proteins—like cat dander and pollen—are seen by the immune system as a threat, which leads to an immune response where certain immune cells are activated and release substances that cause congestion in the nose. That can also lead to sneezing from histamine release in other cells and excessive mucus production in the conducting airways. And there are other cells which release mediators that cause narrowing of the airways beyond what excess mucus does, which is what leads to the symptoms of wheeze and asthma for people that have allergic asthma.

Allergic responses can develop in adulthood as well as in childhood. We often see patients at Boston Medical Center who grew up in a different ecological environment from the Northeast and may not have had problems with allergies when they were younger. But two or three years after arriving here, their immune system gets primed to start developing that maladaptive response. Over time, that can lead to symptoms of hay fever—the technical term is allergic rhinitis—like sinus inflammation or asthmatic symptoms. So, that’s a general background of how people can be susceptible to developing sensitization to allergens.

BU Today: Why have seasonal allergies been so bad this year?

Fred Little: There are several things that contribute to allergy symptoms being worse this year. For one, I think people are wearing masks a lot less compared to the last couple of allergy seasons. Masks obviously provide a little bit of protection from being exposed to allergens outdoors and indoors.

The grass pollen counts have also started to climb a little earlier in the season this year than normal. People who are allergic to grass pollen started having symptoms earlier than before. That’s related to climate change, as well as things that contribute to more pollen generation in general (like a warm, wet spring that helps plants grow). I’m not a climate scientist so I can’t get into the nitty-gritty science, but certainly, over the last 20 years, there have been longer pollen seasons throughout the temperate climates of the United States. Warmth is definitely a factor; if it’s warmer—and warmer longer and earlier on—before and during allergy season, that particular area is going to have more pollen production. We’ve also had drought conditions in Massachusetts lately: dryness during allergy season increases pollen levels just because rain cuts down on airborne pollen.

One interesting tidbit: pine pollen—the yellow pollen you see on cars and in storm drains—is not actually as allergenic as pollen that comes from deciduous, or leafy, trees, like birch, maple, and oak. People may have a perception that the pollen levels are terrible because they see yellow stuff all over the place, but that doesn’t necessarily correlate with the pollen that is the most allergenic.

BU Today: What can people do to decrease their pollen exposure?

Fred Little: Unlike somebody with a food allergy, who can control their exposure to that food, it’s very hard to control exposure to pollens, as they’re so pervasive. Even indoors: as we come in and out of our houses, we wear the clothes we were wearing outdoors and bring pollens into the house. There are some things that can be done to minimize pollen levels in the house. For one, if you have the resources, keep windows closed during the night and day and use air conditioners to keep the air cool.

For people with really bad allergies to pollens, they might want to change out of their outside clothes when they come inside and wash them [as soon as possible]. That can be helpful for people who have severe allergies (or live with someone who does) and want to keep the house as pollen-free as possible. But no house or apartment is airtight, so it can be hard to keep the outdoor environment from coming indoors.

BU Today: What about allergy medications? Are there any tips or tricks to remember?

Fred Little: From a medical standpoint, there are medications that people can get used to. A good example is topical decongestants like Afrin [nasal spray]. The active ingredient in those is oxymetazoline, a decongestant that causes blood vessels to constrict [in the nasal passages]. You know, you have a really bad cold and you do a few squirts and you can breathe better. But, those shouldn’t be used for more than three days at a time. After that, there can be a rebound effect where the nasal tissues themselves become accustomed to the spray and almost dependent on it. You can actually end up worse off than you were at the beginning.

Instead, a mainstay treatment [for congestion] is nasal steroid sprays like Flonase or Rhinocort, which are available both over the counter and by prescription. They can, however, take two or three weeks to kick in and have the maximal effect. If someone uses a spray for a week without noticing a difference in symptoms, it’s not because it’s not working anymore. It’s because nasal steroids take a longer time to modify the abnormal immune response.

An interesting tidbit for allergy sufferers in New England is that our tree pollen season starts before our local trees are even producing pollen. It’s because of all the leafy trees up and down the Eastern Seaboard that pollinate earlier than ours do and send pollen up the jet stream. I’ll often have patients start their nasal sprays in mid-March to prime the pump, so to speak, for immune protection against tree pollen.

Then there are things like antihistamines, which work in a day or two after taking them. There are many patients with mild hay fever symptoms who do fine with just taking Zyrtec or fexofenadine or loratadine once or twice a day. Others with more severe symptoms, particularly nasal congestion, won’t be helped much by antihistamines alone and will need something like a nasal steroid to help control that.

BU Today: COVID-19 is also surging again—how can you tell the difference between allergies and COVID-19?

Fred Little: The truth is, it can be very difficult to differentiate allergy symptoms from mild COVID symptoms during allergy season. The main differentiators are that people with allergies should not have a fever, and certainly not the high fever that you can get with COVID, nor experience the fatigue that’s associated with COVID. We do have to remember that people who have allergic asthma can also develop respiratory symptoms during their allergy season, which can make it a little bit harder to differentiate. But people with asthma are usually familiar with their asthma symptoms and should be able to tell them apart from COVID-19 pneumonia symptoms.

No, You’re Not Imagining It: Seasonal Allergies Are Worse This Year

There is 1 comment on No, You’re Not Imagining It: Seasonal Allergies Are Worse This Year

No, You’re Not Imagining It: Seasonal Allergies Are Worse This Year
1
share this