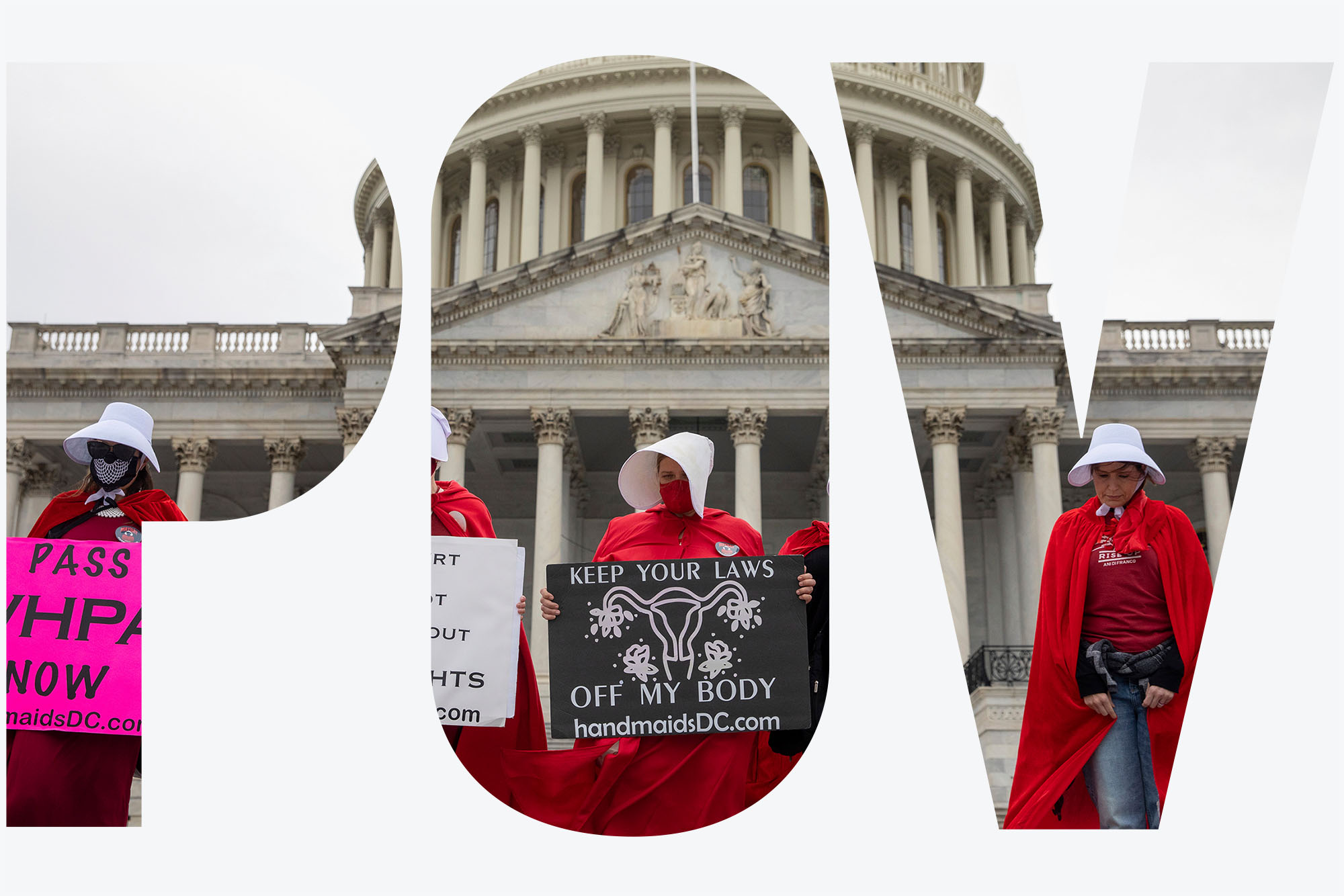 Abortion rights protesters, dressed in costumes from The Handmaid’s Tale, hold signs in front of the US Capitol Building during a demonstration in Washington, Sunday, May 8, 2022. Photo by Amanda Andrade-Rhoades/AP Images

POV: What Rights Could Unravel Next, in Light of Draft Opinion by SCOTUS Overturning Roe v. Wade

By now, Americans have learned of the disclosure of a draft US Supreme Court opinion by Justice Samuel Alito that erases Roe v. Wade and Casey v. Planned Parenthood from the court’s jurisprudence—and with them, a pregnant person’s constitutional right to reproductive autonomy. There are reports that Chief Justice John Roberts initially voted against overruling precedent, but wanted to find a way to uphold the Mississippi law at the heart of the case, which bans abortion after 15 weeks, and now plans to dissent.

Beyond what Alito’s draft opinion in Dobbs v. Jackson Women’s Health Organization portends for the future of abortion rights is the striking method of analysis he employs in the reported draft. Despite his many efforts to reassure that the opinion “does not undermine” other constitutional rights “in any way,” it actually outlines a roadmap for the withdrawal of other cherished constitutional rights.

We should not take Alito at his word that the court might go no further after eliminating abortion rights, and a careful reading of his draft suggests a number of reasons to be concerned the current court could target other rights.

First, we should always take with a grain of salt what judges say in trying to contain what other judges might say in the future. Just as Alito and several other justices felt no need to stick with a precedent that has been on the books for nearly 50 years, there is nothing in the Dobbs draft that binds future justices according to the fine distinction Alito draws when he says that “what sharply distinguishes the abortion right from the rights recognized in the cases on which Roe and Casey rely” is “the critical moral question posed by abortion.” Many other rights, too, pose difficult moral questions, such as a parent’s right to educate a child, the proper place for religion in the public square, or the rights of sexual minorities.

Alito suggests that the fact that many Americans see abortion as the destruction of potential life marks the dividing line between the right to abortion and other rights—but it’s not the only place where one might draw the line between morally fraught matters. Five justices could easily say later that other rights are morally difficult and should be returned entirely to the vagaries of legislative politics.

Second, Alito’s method of analysis in Dobbs doesn’t just overrule abortion precedent, it treats precedent generally as a paper barrier to a narrow reading of constitutional text and tradition—something that can be swept aside whenever five justices believe that a past decision is wrongly decided. Alito spends time explaining why the Casey court erred by not overruling Roe (which he calls “egregiously wrong and deeply damaging”) when it had the opportunity to do so back in 1992. Along the way, he maligns Justice Harry Blackmun, the author of Roe, and everyone who subsequently voted to uphold that precedent, for approving something “far outside the bounds of any reasonable interpretation” of the Constitution. (He also calls Roe an “abuse of judicial authority.”)

Relatedly, the Casey plurality had concluded that it would affirm Roe in part because millions of Americans had since 1973 relied upon that precedent to order their lives. In his draft opinion in Dobbs, Alito merely shrugged at that key point and observed, “that form of reliance depends on an empirical question that is hard for anyone—and in particular, for a court—to assess.” In other words, the fact that ordinary citizens have found a right to be valuable will not stop an emboldened conservative court in overruling precedent and erasing a constitutional right in the future.

Third, the actual methodology Alito employs to say that no constitutional right to reproductive autonomy exists would imperil other judicially recognized rights. He writes that “[t]he Constitution makes no reference to abortion,” and then limits any rights not specifically mentioned in the Constitution to those “deeply rooted in this Nation’s history and tradition.”

Alito’s text-narrowed-by-tradition approach—if applied consistently—would seem to eliminate other rights that aren’t explicitly listed in the Bill of Rights, including the right to birth control and same-sex marriage. After all, neither marriage nor contraception is mentioned in the Constitution, and it’s exceedingly unlikely that a legal test that hews so closely to tradition would yield the answer that birth control or same-sex marriage was deeply rooted by the time of the 14th Amendment’s ratification in the late 19th century. This narrow method of understanding individual liberty authorizes a return to traditionalist, and perhaps even sectarian, modes of analysis—it all depends on how five justices understand our nation’s sense of “ordered liberty.” And laws once outlawed the use of birth control and same-sex marriage—Alito’s justification for denying that the right to reproductive autonomy is deeply rooted in tradition.

It would also almost certainly spell the end to any approach that takes account of broader societal or legal developments when deciding what is “constitutional.” Over the course of American history, mobilized citizens have achieved meaningful shifts in the meaning of “liberty” and “equality”—an important source of adaptations in our legal order, particularly when it is so hard to formally amend the Constitution. The court has, in the past, taken these shifts into account: one example of this type of text-and-principle approach can be found in decisions authored by Justice Anthony Kennedy, who had explicitly incorporated legal and political developments in Lawrence v. Texas and Obergefell v. Hodges when he determined the scope of the 14th Amendment. But Alito’s draft would slam the door on that sort of rights jurisprudence.

To the contrary, he deems any approach to interpret the Constitution as a living document “controversial,” even after all these years. Indeed, Alito’s draft takes potshots at a variety of rulings in which other rights were vindicated. It’s telling that Alito calls Roe’s invocation of a right to privacy “remarkably loose in its treatment of the constitutional text” and “unfocused analysis.” But Roe largely relied on Griswold v. Connecticut, which established a right to privacy to use contraception by drawing together different provisions and cases that, in one form or another, protected some sphere of privacy or liberty. The same accusation Alito levels against Roe can also be made about Griswold, and nothing Alito says in Dobbs limits his hostility to this kind of structural analysis to abortion.

At a later point in the draft, Alito pokes fun at Kennedy’s language in Casey and Lawrence, which established a right to sexual intimacy regardless of one’s sexual orientation. “While individuals are certainly free to think and to say what they wish about ‘existence,’ ‘meaning,’ the ‘universe,’ and ‘the mystery of human life,’ they are not always free to act in accordance with those thoughts.” But this is more than just a gratuitous effort to ridicule; Alito is not so subtly denying legitimacy to decisions that encompass a progressive conception of liberty. Kennedy had grounded Casey, Lawrence, and Obergefell (establishing a right to same-sex marriage) on such a reading of the 14th Amendment. Alito’s approach can be used to unwind these decisions too.

Of course, there’s much that could still change before the Supreme Court issues an official decision in Dobbs, replete with any concurring and dissenting opinions. Votes could still change, and there are often some modifications to an opinion as it is circulated and discussed by the justices, so some of this language could still be softened or eliminated. But if most of Alito’s draft remains intact, Americans should be prepared not just to see Roe v. Wade obliterated, but to also see other constitutional rights put up for grabs. Once rights are rolled back, as Alito’s opinion upholding Mississippi’s law reminds us, the state needs only to assert moral reasons to criminalize behavior it wishes to discourage. Eliminating a landmark decision is like cutting a hole in a tapestry, and we don’t know yet how much of constitutional law will unravel.

If there is one precedent that Alito’s opinion respects, and indeed doubles down on, it is the 1997 decision authored by former Chief Justice William Rehnquist: Washington v. Glucksberg. There, the court used the text-and-tradition approach to reject a constitutional right to die. The fact that the Constitution did not spell out such a right clearly, coupled with the existence of laws on the books banning suicide, was enough to stop an individual’s assertion of a right to assisted suicide in its tracks. Alito’s draft Dobbs opinion repeatedly invokes Glucksberg, reviving a methodology that puts much of individual rights analysis at the mercy of the state by making whether a right exists largely coterminous with past exercises of state power.

Again, the fact that states once criminalized a sphere of activity seemingly ends the analysis before it begins. What 19th-century Americans reasonably believed “liberty” or “equality” meant (an approach that might involve resorting to original public meaning), or what citizens believe such terms mean today (a pure textual approach or living constitutional approach), would be wholly irrelevant to what federal judges may decide.

Alito’s reliance on Glucksberg is noteworthy for another reason. The only justice remaining in the 5-4 majority that issued that decision still on the court is Justice Clarence Thomas. As the most senior member of the apparent majority in Dobbs, Thomas would have the power to assign someone to write Dobbs. Giving it to Alito to deal the final blow to Roe, rather than another colleague, would not just raise the odds that their coalition doesn’t fall apart, but also ensure that the opinion would adopt the methodology most hostile to modern rights jurisprudence—and give the court the most leeway to roll back other rights we have come to rely on.

Robert Tsai is a School of Law professor of law and a Law Alumni Scholar; he can be reached at rltsai@bu.edu.

This opinion piece was originally published on Politico’s website on May 3, 2022.

POV: What Rights Could Unravel Next, in Light of Draft Opinion by SCOTUS Overturning Roe v. Wade

There are 11 comments on POV: What Rights Could Unravel Next, in Light of Draft Opinion by SCOTUS Overturning Roe v. Wade

POV: What Rights Could Unravel Next, in Light of Draft Opinion by SCOTUS Overturning Roe v. Wade
11
share this