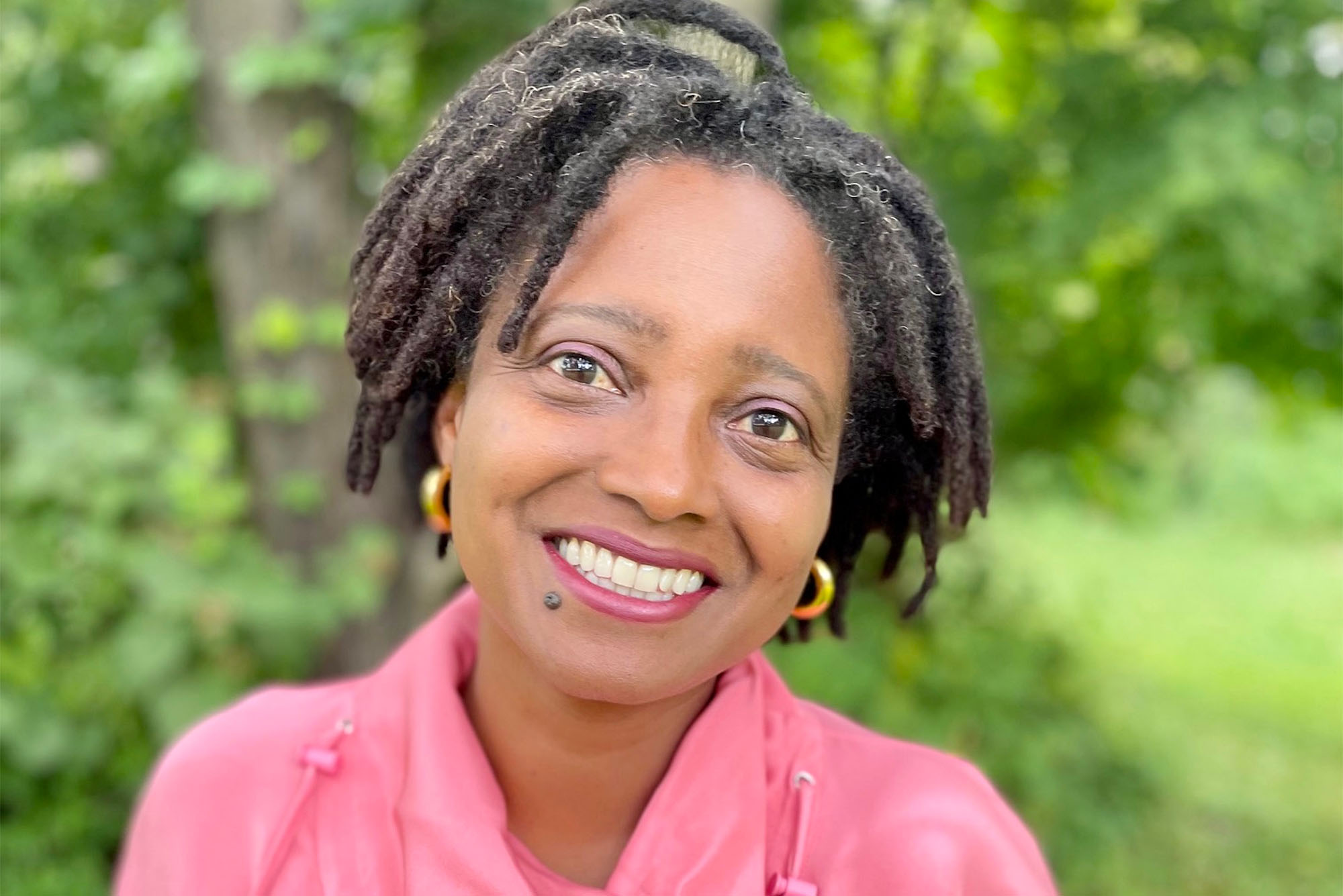 Tracy K. Smith will read from her latest collection, Such Color: New and Selected Poems, April 12 at the Leventhal Center. The event is free and open to the public and a book-signing will follow. Photo courtesy of Smith

Tracy K. Smith was a fifth grader in Fairfield, Calif., when she came upon Emily Dickinson’s poem “I’m Nobody! Who are you?” Reading it, she says, she felt understood.

“I thought “Aha, there is another space we can enter into. It felt familiar to me. I liked the largeness and sort of astonishment of it,” Smith says. “And I think that stayed there, that sense that there is this large space that we are in or belong to, that language can help us get back to.”

By the time she arrived at Harvard as an undergrad, Smith knew she wanted to be a writer, but was unclear how to get there and what kind of writer she wanted to be. But studying under poets like Seamus Heaney and Henri Cole and attending readings and meeting local poets proved “revelatory,” she says. It was then she discovered that poetry was “a living force.”

Today, Smith is one of the nation’s foremost poets, a two-term US poet laureate (2017-2019), author of five collections, and recipient of the 2012 Pulitzer Prize for Poetry for her third book, Life on Mars, an exploration of what it means to be human. She has also written the libretto for two operas, as well as a memoir, Ordinary Light, which was a finalist for the 2015 National Book Award. She is currently at work on several nonfiction projects, including a book that expands on a lecture she delivered as poet laureate, called “Staying Human: Poetry in the Age of Technology.” The book will examine how the language and ethos of poetry can serve as an antidote to what Smith describes as “some of the diminishing forces and practices that have gotten embedded in our day-to-day life thanks to our relationship with technology.”

On Tuesday, April 12, Smith will read from her work at this semester’s Robert Lowell Memorial Poetry Reading, starting at 7:30 pm at the Leventhal Center. She’ll be joined by Kirun Kapur (GRS’00), the prize-winning author of two collections of poems, Visiting Indira Gandhi’s Palmist and Women in the Waiting Room, and the director of the Amherst College creative writing program. She is also an editor of the Beloit Poetry Journal, one of the country’s oldest poetry publications. The event marks the first time the Lowell series has been held in person since the pandemic struck.

BU Today spoke with Smith, who is a Harvard University professor of English and of African and African American studies, about her writing and how her work has changed in recent years, what she discovered on her visits to rural communities during her tenure as poet laureate, and what poetry gives us that other art forms do not.

This interview has been edited and condensed for space and clarity.

BU Today: How do you approach a poem?

Tracy K. Smith: There’s always an itch, a question, an anxiety, or apprehension that starts a poem for me. Some poems are just expressions of joy or love, but even those poems seem to arise out of this feeling that is different from what I thought it would be, the stakes are higher than I thought they were. So a poem becomes a place for me to try and find a moment or some sort of logical or intuitive toehold that can help me make sense of something that just doesn’t seem right.

BU Today: Are you often surprised by where a poem takes you?

Tracy K. Smith: I’m only going to feel the poem is finished if I am surprised. I will not feel that I have gotten far enough into my question if the answer is something I have already consciously held. That’s why a lot of starting a poem for me has to do with finding the right subject position, finding the right question to ask so that I’m not just expressing what I believe, but rooting around in different perspectives on this issue, this question, this whatever, in order to find something I haven’t yet considered. And that’s very exciting to me, that it can be my imagination, my vocabulary, my experience, or my ability to do research working together to teach me something I didn’t know. That’s always been the miracle of poetry.

BU Today: As US poet laureate, you traveled across the country and decided to focus on rural communities. Why was that important for you?

Tracy K. Smith: I’ve always said that if we could allow our political discourse to move over and occupy the decibel level and the humility with which we talk about poetry, we could really get somewhere. So given the opportunity to step into the laureateship, I wanted to take poetry into spaces where people are not overly habituated to hearing it and critiquing it together at literary festivals and reading series.

Rural America felt like a great site that would allow me, as a liberal Northeasterner, to cross that political divide and test out my theory…and I felt like my theory was borne out. There was the most powerful generosity and vulnerability that people were willing to just bring into spaces with strangers—and hearing and talking about poems, I would read poems, some of my own, but mostly poems by other living American poets, that allowed us to talk about people’s experience of place, of family, of loss. I felt so heartened and consoled during the beginning of a bleak time because there was such love that people were willing to bring by just sharing themselves and listening to each other.

BU Today: What did you discover during those two years?

Tracy K. Smith: I teach creative writing at universities, so I oftentimes have found myself talking about craft, form, discipline, and language with more weight on that than on content. And that experience really recalibrated my understanding of why I do what I do and what poems are for. They help us to live. They don’t end with language; language is merely the vehicle for this bigger pursuit. That big pursuit is about losing ourselves and finding ourselves with others…. I think it’s changed the questions I bring to the reading of poetry, and certainly it’s changed how I teach.

BU Today: You’ve said that your creative process also changed during the COVID pandemic and the moment of racial reckoning that occurred simultaneously. Can you talk about that?

Tracy K. Smith: I’ve always felt that a big part of the work I’m doing on any poem is listening. I’m listening to my better self, I’m listening to my unconscious mind and the other poets who have guided me, who I believe myself in some way to be in dialogue with. And then I’m listening to something that I hope is real that I don’t know what to call.

Beginning in 2020, when things got so terrifying and so close and so ongoing in terms of all the uncertainties—but particularly for me, racial injustice that we still haven’t figured out how to put an end to—meditation became a powerful coping mechanism. I found myself developing a mode of reflection and listening and meditation that felt to me a credible kind of dialogue with something else—with something that wasn’t me. And that dialogue has generated a lot of poetry. All of the new poems in Such Color come out of that type of engagement with something that I believe to be maybe ancestors, or maybe I don’t know what to call it. I’ll just say that there’s this other point of contact that has infused the poems with a literal call and response, which is the case with the first poem, “Riot.” Images and rhythms are different from the way images and rhythms have behaved in my poems previously and so the poems are transmitting that.

BU Today: How has your writing changed over the course of your career?

Tracy K. Smith: I think the first poems that I was writing and the poems in my first book (The Body’s Question) are driven by statements, because I believe in the sense of authority and wisdom that I loved to receive. My work has, over time, become much more visual, because seeing and looking and thinking about where images take me associatively has been generative. It’s helped me to keep going when my ideas and authority have kind of run out. I also think that music has been getting louder and louder for me in my work in general, through internal rhyme, through repetition, through different forms of pattern-making and disruption. I think that is probably also becoming a larger engine in my poems, but I don’t know. I think the subject matter and the audience that I’m intentionally speaking to in these most recent poems are really centering on the community of Blackness. That feels like a different conscious decision than I was making, or maybe I’m making it more emphatically than I have in the past. I know that has to do with time and what it has taken from me and what it has given me.

BU Today: Why is it important for us to make space for poetry in our lives?

Tracy K. Smith: It allows you to slow down and get closer to really looking at, listening to, and making sense of the moments of large, powerful and sometimes confounding feelings that all of us live with. Love or loss or war or birth. All of those things that fill you with emotions that don’t make easy sense. Poems allow us to take the time to find where those emotions sit, what they feel like, and what they’re connected to. Hardly anything else in our lives encourages that. Everything else is fast and about surface.

The Robert Lowell Memorial Poetry Reading, featuring Tracy K. Smith and Kirun Kapur (GRS’00), is tonight, Tuesday, April 12, at 7:30 pm in the upstairs auditorium at the Leventhal Center, 233 Bay State Road. The readings will be followed by a book signing. The event is free and open to the public. Find more information here.