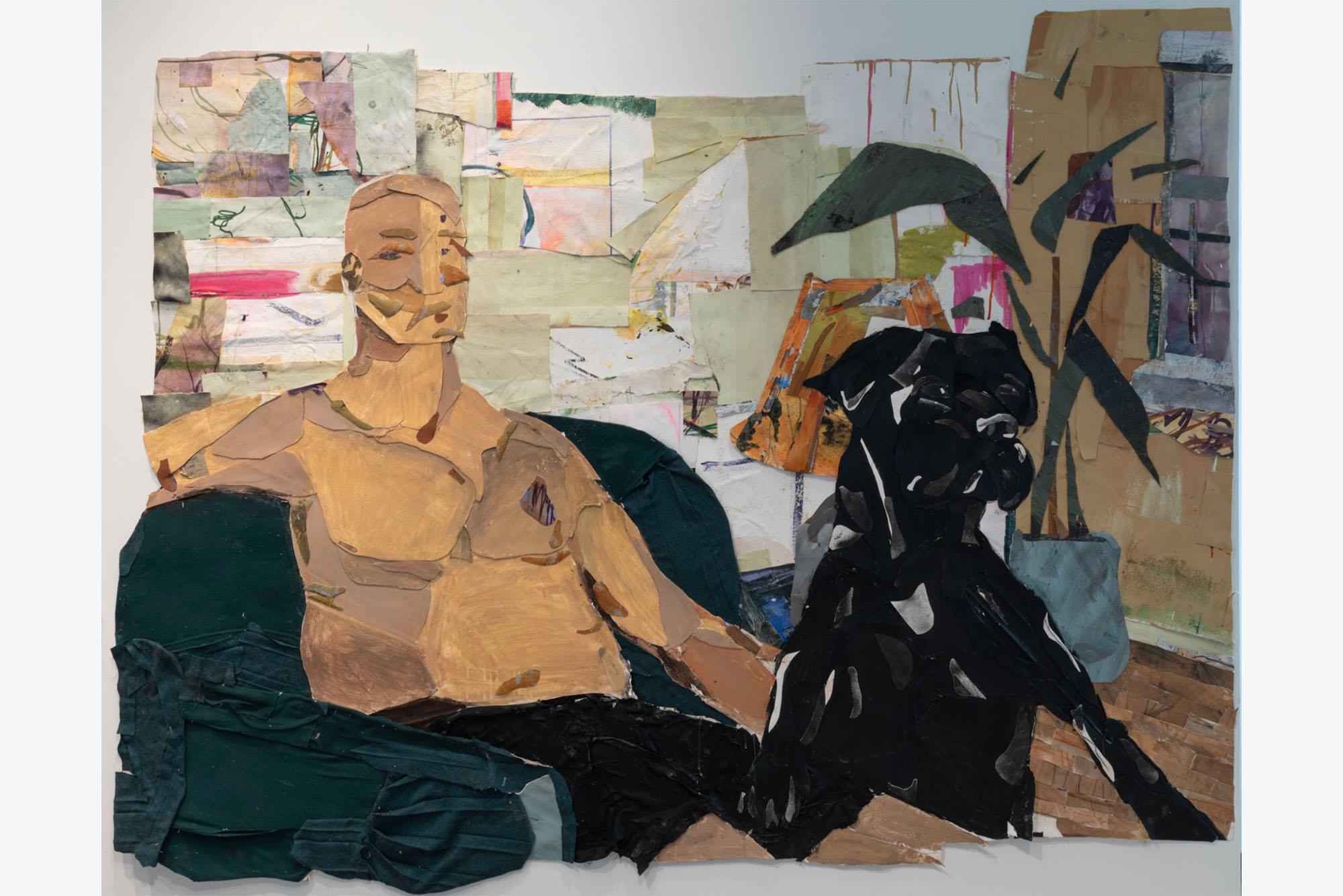 In May, Oscar Morel graduated from Boston University with a master’s degree in painting—and some anxious thoughts as he looked ahead.

“Anytime you graduate from something, the question is always, what next?” says Morel (CFA’22), now back in his family home in New York City. “It’s dark; it’s the scariest question that someone could ask you.”

It’s a common concern, but in fact, the future looks bright for Morel, a mixed-media artist who spent his time at the College of Fine Arts creating collages based on scenes from his Bronx neighborhood. From July 14 to 30, his MFA work is being displayed alongside that of his classmates at Manhattan’s Morgan Lehman Gallery. At the end of the summer, he’ll take up a residency at the Massachusetts Museum of Contemporary Art (Mass MoCA), and in late fall, he’ll travel to New Hampshire to begin a coveted MacDowell arts fellowship.

At CFA, Morel studied under “forces of nature” like Lucy Kim, an associate professor of art, lecturer Paul Karasik, and Josephine Halvorson, a professor of painting and chair of graduate studies in painting. He took advantage of his surroundings—campus studios—by repurposing other students’ discarded paintings and incorporating them into his collages. His efforts saw impressive rewards. In his final semester, his work was included in two exhibitions—one at the historic Piano Crafts Gallery in Boston’s South End and the other at BU’s Faye G., Jo, and James Stone Gallery—and in May the Boston Globe named him one of its “Six Art-School Stars from Around Boston to Watch in 2022.” At 24, he was the youngest on the list.

Repurposing discarded canvases “was a form of collaboration I had with myself, which other artists didn’t realize,” he says. “Now, leaving that space of immediate collaboration, how will I find it? It’s going to be interesting; maybe I’ll start making my own canvases.”

Morel’s introduction to collage was a combination of inspiration and necessity. The Globe notes that upon his arrival in the city, he brought with him “enough money to pay the rent for an apartment—and that’s about all,” which left him with no resources to purchase art supplies.

The canvases he used for his pieces were either given to him by students who otherwise would have thrown them out or had gone unclaimed in the college’s studios. Morel found that collage, as a form, lent itself to both scavenging and repurposing. Eventually, he focused his technique and conceptual process around the recontextualization of materials, which he likens to the way a music producer uses samples to create a hit song. In Morel’s case, he uses the materials to create distinctive slice-of-life scenes. His collage Knocks on the door depicts a man sitting in his apartment with his dog, and The Tenancy of the Lobby Furnace shows a harrowing incident between two police officers and a civilian.

“It’s fun to go back and forth and create connections in my head,” Morel says. “I don’t give myself any restrictions.”

His collaging technique begins with sketching the scene and its inhabitants, which gives him a chance to draw on his extensive background in drawing and painting. He thinks about the canvas as he would a piece of theater: the figures need costumes and poses and backstories in addition to form, color, and shadow.

“I take a lot of inspiration from artists like Titian and Carvaggio—all those melancholy, melodramatic poses,” he says. “It’s really fun to sample those positions and plaster them on.”

Once he’s mapped out a scene, Morel begins to incorporate his reclaimed canvases. In Knocks on the door, for example, he layered slices of marbled black for the dog’s shiny coat; in You go for me and I’m taboo he pieced together mottled purples and reds for a woman’s skin.

The layering stage “is just adding canvas on top of canvas,” he says. “I look at people’s works and think, oh, this color works good as a skin tone.”

The signature scenes he created at CFA are modeled after the Bronx streets of his youth. Influenced by his understanding of the urban landscape, he sought to construct a world where familiar faces haunt local street corners and any figure could be your neighbor, your uncle, or you—the types of people who are not often represented in the art world.

“A lot of people don’t understand that the Bronx is the poorest congressional district in the city,” Morel says. “I want to share my story in spaces that are hyperspecific to how they are understood.”

As a student, Morel’s sense of observation was on high alert during his trips home to New York. What he saw was a duality between the familiar Bronx of his youth and a place of deepening economic strife.

“When I come back, I get excited about seeing my friends and being back in that space,” he says. “But also, I tend to forget the homelessness and poverty in my neighborhood and how very present it is… It’s gotten worse over time.”

In one instance, which he later immortalized in The Tenancy of the Lobby Furnace, Morel saw two police officers talking to a homeless man in the vestibule of his apartment building. When he recounted the incident to his mother, she mused that the homeless man was most likely seeking warmth on a winter day.

“At first it was a little frustrating for me in a very egotistical way, because I was home on break and I didn’t want to see that,” he says, but his mother’s explanation helped him shake loose “the common experience of seeing those faces and those bodies in that situation,” and helped him empathize with the man seeking shelter from the cold.

“Not telling that story [through collage] would have been the same thing as walking by and not telling my mom about it,” he says. “In a way I was trying to say what she said to me.”

A lot of people don’t understand that the Bronx is the poorest congressional district in the city, so [my art] becomes a way of showing a voice that’s not seen.

Morel says his greatest artistic motivation is “a sense of place,” and his process of constructing theatrical scenes through collage allows him to capture moments in time. He seeks to re-create what street photographers like Garry Winogrand and Vivian Maier found through serendipity.

The irony of this practice is that for several years, Morel hasn’t stayed in one place for very long. Between four years of undergrad at DePauw University and his master’s program at BU, he has had to draw on memory and instinct for his collages of the Bronx. The tree-lined streets of Boston and manicured lawns of the Midwest are pretty, he says—and “a necessary change of pace”—but they didn’t inspire him the way New York does.

In mid-August, Morel will be on the move again. This time he’ll depart the Bronx for rural North Adams, Mass., where he’ll do a monthlong residency at Mass MoCA. Then he’ll go north to Peterborough, N.H., where his MacDowell fellowship begins on November 3.

Will so much time away from the Bronx affect his art? He’s not sure, he says, but he’ll be keeping an open mind about the types of places that can inspire him.

“I think it’s really going to depend on the moment; maybe I’ll lean into it and start doing forests, or maybe I’m going to crave the city so much that I’ll only do bricks and concrete,” he says. “Leaving places with potential growth, and feeling like you have more to do, is better than anything else—just feeling like you’re not done.”

And just maybe he’ll stop fretting about the future.