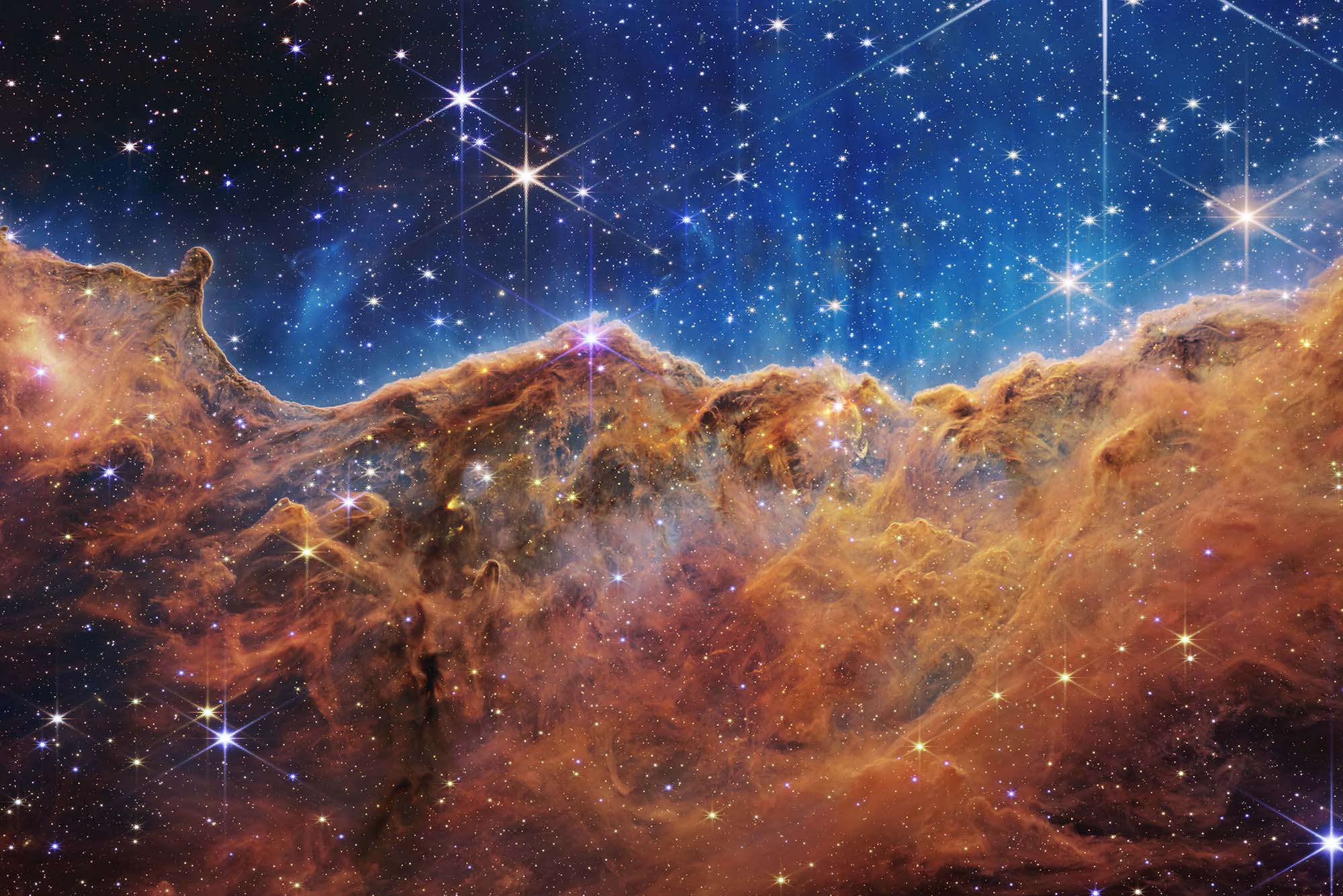 One of five images from the James Webb Space Telescope: the Carina Nebula (above) reveals a previously invisible region of space where stars are born. The tallest peaks of the nebulous cloud are about seven light-years high, according to NASA.

“A New Era of Discovery”: We Can Now See the Deepest Infrared View of Space Ever

Impressed, excited, amazed—scientists and any fans of outer space were astonished as the National Aeronautics and Space Administration (NASA) on Tuesday unveiled the clearest pictures of deep space ever seen. One scientist was even moved to tears. The five images came from the largest infrared telescope ever launched into space, the James Webb Space Telescope (JWST, Webb for short). Webb has been orbiting the sun since it took off from French Guiana on December 25, 2021, and the stunning full-color images are only the beginning of what’s expected from the telescope in the next two decades.

The images opened our eyes to a nebulous dying star, called the Southern Ring Nebula, which stretches across the black backdrop of space in glowing reds and blues, with a shimmering star in the center, and to the Carina Nebula—which looks strikingly like a craggy mountain range against a night blue sky with young stars shining through the entire region.

“JWST will enable huge advances in the study of objects on a wide range of scales—from the details of exoplanets to the most distant galaxies. It will open up new windows on the universe,” says Elizabeth Blanton, a Boston University College of Arts & Sciences associate professor of astronomy. Exoplanets are planets beyond our solar system, often orbiting other stars.

Stephan’s Quintet (left) and the Southern Ring Nebula (right) both reveal never-before-seen details of galaxy groups and nebulae objects, which are clouds of gas and dust expelled by dying stars.

Blanton studies galaxy clusters, like that in the very first image from Webb (below), shown at a special White House teaser event the day before the main reveal; it is the deepest and sharpest infrared image of the distant universe of galaxy cluster SMACS 0723. A group of five galaxies, called Stephan’s Quintet, was also caught on camera—the final image constructed from almost 1,000 separate files—and gives new insights into galaxy evolution in the early universe.

“With its sensitivity and resolution, JWST will enable the discovery and study of clusters of galaxies and individual galaxies so distant and early in the universe that they’ve never been able to be observed before,” Blanton says. She wasn’t the only BU astronomer excited by the results of Webb—a project that involved decades of planning and an international team of scientists. Catherine Espaillat, a CAS associate professor of astronomy and director of the Institute for Astrophysical Research, will be using data from Webb to observe protoplanetary disks.

“Protoplanetary disks are made up of the dust and gas that make up planets, and we will be using these spectra to measure the composition of the gas and the properties of the dust grains,” Espaillat says. Her team is expecting high-resolution data in the mid-infrared wavelength, a type of light that our eyes can’t detect on their own. An image of the Carina Nebula, a star-forming region, resonated with her the most since it’s what she studies—the image revealed finer details of the clouds she’s examined.

This image of galaxy cluster SMACS 0723, also called Webb’s First Deep Field, captures even the faintest objects, like tiny dots of galaxies billions of years old. To put things in perspective, this slice of the vast universe covers a patch of sky approximately the size of a grain of sand held at arm’s length, according to NASA.

“The discoveries are a big deal because they usher in a new era of discovery for astronomy,” she says. “JWST is expected to be operational for 20 years, so it will undoubtedly lead us down new paths of exploration we haven’t even contemplated yet. JWST will help us answer the question of how planets form and their potential for habitability.”

Philip Muirhead, a CAS associate professor of astronomy and associate director of BU’s Perkins Telescope Observatory, studies exoplanets and low mass stars like brown dwarfs. Data from Webb could help him and his team analyze the atmosphere of distant planets for signs of life, like water or oxygen.

To further understand the significance of the Webb images, The Brink sat down with Muirhead to talk about how the telescope gets such fine images of the universe and how it will contribute to the search for life on other planets and our understanding of the universe as a whole.

The Brink: What makes this moment so special?

Muirhead: The bigger a telescope is, the more light it can collect. That means bright things become even brighter and you can see even faint objects. And because of the wave nature of light, the bigger the telescope, the finer the detail you can see on astrophysical objects. There are bigger telescopes than JWST on the ground, but from the ground you have to deal with the Earth’s atmosphere, which tends to blur images, and you don’t have the advantage of better resolution.

The Brink: What was your first reaction to the images?

Muirhead: Well, we’re seeing exactly this effect! The very first image released at the White House was a deep image; I think it was about an 11-hour exposure of a well-studied region of space that contains galaxy clusters—a bunch of galaxies that are sort of close to us, and then many, many thousands of galaxies further away. If you compare, for example, the Hubble Space Telescope image of the same region to the JWST image, you see many more faint little dots.

The Brink: What are the dots?

Muirhead: Those faint little dots, most of them are very, very distant galaxies, very, very far away. I like to say in my class that telescopes are like time machines. Light travels at a finite speed, so the further away something is, you’re seeing it in the past, because it took time for the light to reach Earth. The faintest things you’re seeing in that JWST image [of galaxy clusters] is looking into the past billions and billions of years. One of the primary science goals of JWST is to study how galaxies initially formed. How do they first appear? What are the stars like in the very first galaxies? I was excited when I saw that image because I thought, we’re gonna start seeing galaxies not very long after the Big Bang, some of the very, very first galaxies.

The Brink: I know one of the missions of the James Webb Telescope is to study exoplanets and look for habitable planets. Can you explain what they found so far?

Muirhead: Yes. They did an observation of an exoplanet and JWST observed [the planet passing in front of its host star] at many different wavelengths. One of the goals is to look at the atmospheres of terrestrial planets orbiting within the habitable zones of other stars. They started with a gas giant planet, which is very hot, and they did this because they knew they should see something.

They show [the observations of the atmosphere for exoplanet WASP-96 b] in the image of the spectrum—it is not a pretty picture, but for my field, this is actually the most exciting thing. You can see it says water H2O at some of the bumps. At the top of those bumps, that’s where water is opaque and the planet looks bigger. At the bottom of the bumps, water is transparent and the planet looks smaller. This was already known from previous data. What’s curious is that they also plot the best fit model, the blue line. That’s the best estimate of what the atmosphere of the planet should look like. They don’t actually match very well, which you might think is embarrassing, but it’s actually really exciting, because it means that our model for this atmosphere is missing some molecular constituents, or it’s missing some other elements.

The Brink: Why is it so exciting to find water?

Liquid water on the surface of the terrestrial planet, at least in the case of Earth, is necessary for all life. If we assume life forms on other planets in a similar way—which is a huge assumption, but it’s all we really have to go off—then we are very excited about finding evidence for liquid water on the surfaces of other planets. If we were to see water in the atmosphere [of another planet], that is exciting because it means there might be water on the surface. In the case of the gas giant planets like this one, it’s a little bit less exciting. But it’s exciting in that we know we can detect it. We have detected water in the atmospheres of gas giant planets previously, but the really exciting stuff happens when JWST starts pointing at terrestrial planets, because then we can start looking for evidence for liquid water and for oxygen, which on Earth is produced by life. That is a very difficult observation that requires a lot of measurements of that transit event. There is a particular system that will be observed in the coming year, called TRAPPIST-1, which has three terrestrial planets orbiting at distances where they could have liquid water, so we may see if they have liquid water next year, which would be really, really exciting.

The Brink: How will data from Webb help advance your research and what sort of questions could it help you ask and answer?

Our lab has a planet search going on searching for terrestrial planets orbiting brown dwarfs. We actually have one candidate right now that may end up being a real planet. But before we can say it’s certainly a planet, we need to see it pass by again. So the fact that the telescope works is really great news, because it means that when we discover more about our planetary candidate, or if we discover new potential planets, we can then propose to JWST to go study their atmospheres. That was actually what got us the grant to do our search in the first place. We want to find these objects, because we want to use JWST to study their atmospheres.

This interview was edited for clarity and brevity.

“A New Era of Discovery”: We Can Now See the Deepest Infrared View of Space Ever

The First Black Hole Image from the Milky Way Is Here

There are 2 comments on “A New Era of Discovery”: We Can Now See the Deepest Infrared View of Space Ever

“A New Era of Discovery”: We Can Now See the Deepest Infrared View of Space Ever
2
share this