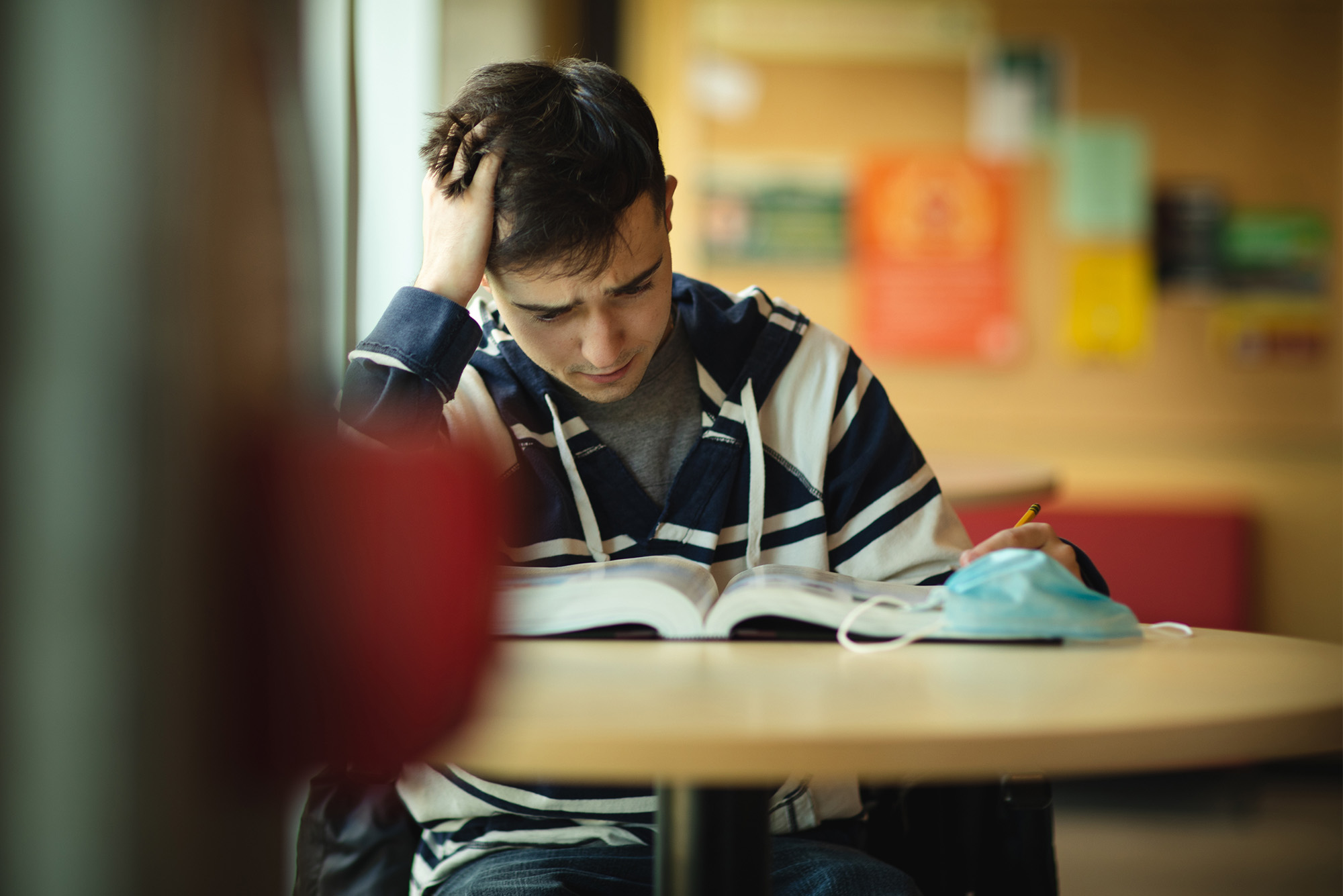 The COVID-19 pandemic took a toll on many college students, but researchers did not find a huge spike in reported mental health problems during the semesters of the pandemic. Rather they saw a continuation of a troubling trend. Photo by iStock/lightspeedshutter

Mental Health of College Students Is Getting Worse

The rate of mental health problems, including anxiety and depression, has steadily increased over the past eight years, with rates even higher among racial and ethnic minority students

To say that college years are a time of great change is an understatement; whether you stay at or close to home, or move away to a four-year university, the post–high school years are often a time of new experiences, unfamiliar responsibilities, growing pains, and learning curves. They can also be a time when some students have to navigate their own physical and mental health for the first time without parental support.

In a new study, Lipson and her colleagues reveal just how common depression, anxiety, and other mental health issues are, and how these issues take a toll on students of color unequally. The paper looks at survey data collected by the Healthy Minds Network between 2013 and 2021 from 350,000 students at over 300 campuses. It’s the first long-term, multicampus study of its kind to parse out differences in treatment and prevalence of mental health issues across race and ethnicity. The study was coauthored by Lipson and other members of the Healthy Minds Network team.

“As a budding clinician of color, I think the tracking of these trends helps support efforts related to stigma reduction and [mental health] education that can be targeted toward certain communities,” says Jasmine Morigney, a clinical psychology doctoral student at Eastern Michigan University and a coauthor on the study.

The researchers used screening tools to measure mental health symptoms, levels of flourishing, and whether a student received treatment during their time at college; participants self-identified their race and ethnicity.

They found that the mental health of college students across the United States has been on a consistent decline for all eight years of data analyzed, with an overall 135 percent increase in depression and 110 percent increase in anxiety from 2013 to 2021; the number of students who met the criteria for one or more mental health problems in 2021 had doubled from 2013.

American Indian/Alaskan Native college students were found to have the largest increases in depression, anxiety, suicidal ideation, and other mental health problems, as well as the largest decreases in flourishing. Back in 2016, about a third of American Indian/Alaskan Native students screened positive for depression, a similar level to other racial and ethnic groups in the study. But by the 2019 and 2020 semesters, half of those respondents were screening positive for depression.

“There has not been nearly enough research on this population,” Lipson says. “My hope is that these data document the urgency around understanding some of the unique factors shaping these students’ mental health. American Indian/Alaskan Native students need to be brought into the conversation for universities to invest in resources that align with their preferences.”

For white students, the prevalence of non-suicidal self-injury and symptoms of eating disorders increased most significantly compared to other groups. In all other categories—depression, anxiety, suicidal ideation, and one or more mental health problems—increases were seen the most among non-white students. During the semesters of the COVID-19 pandemic, American Indian/Alaskan Native students and Asian/Pacific Islander/Desi American (APIDA) students reported the most significant increases in mental health concerns, according to the data.

Although more students overall are seeking help and access to mental health services on college campuses than they were in 2013—which is good news, says Lipson—the prevalence of mental health issues seems to be outpacing the number of students finding and receiving support. And some groups of students are actually less likely to get help than a decade ago. For example, Arab American students experienced a 22 percent jump in mental health issues, but had an 18 percent decrease in treatment over the eight years of the study, highlighting a critical gap between onset of symptoms and accessing help. During the semesters of the pandemic—when many schools went remote—fewer students of color were accessing necessary services.

“I find the change in treatment rates among students of color in the context of the COVID-19 pandemic to be quite surprising,” Morigney says. Treatment declined the most in 2020 among APIDA and Black students. “Given the impact of the pandemic on this community and concentrated traumatic racism, it makes this finding quite alarming,” she says.

Not Just a Pandemic Problem

Though researchers tracked significant increases in anxiety and depression during the height of the COVID-19 pandemic, Lipson says the numbers show a continuation of a troubling trend rather than a singular spike.

“The crisis related to mental health exists beyond the college and university setting,” Lipson says. But the potential to intervene and reach students at a uniquely important time of life is huge. “It might not be perfect, but many four-year colleges offer some of the best resources people will ever have,” Lipson says, since these institutions can use their resources to remove many barriers to care, such as a lack of available providers, long wait times, and financial restraints.

University policies to address and eliminate racial discrimination on campus and in healthcare settings can also reduce the mental health risk factors that many students of color experience.

“I would love to see universities work to enhance and promote diversity in their behavioral health staff,” says Morigney. Students of color may not know if their campus counseling centers have staff with similar cultural backgrounds and could be reluctant to seek out services, she says. “The majority of mental health professionals are white, and universities are critical for not only providing students with culturally and ethnically diverse care, but also providing opportunities for clinicians of color to serve these student bodies.” Providing training opportunities to encourage students of color to enter the field of mental health is also a huge opportunity.

“One of the most important aspects of this study is documenting these inequalities and communicating them to folks who can use this information to enact change,” Lipson says. For colleges across the country worried about retention rates—many colleges are seeing more students quit before completing their studies—she says the conversations about retaining students and mental health need to be brought together. It’s often the “same students who have the lowest rate of retention in higher education [who] are the same students who are least likely to access mental health services when they are struggling, and mental health is a predictor of retention,” she says.

Mental Health of College Students Is Getting Worse

Mental Health of College Students Is Getting Worse
8
share this