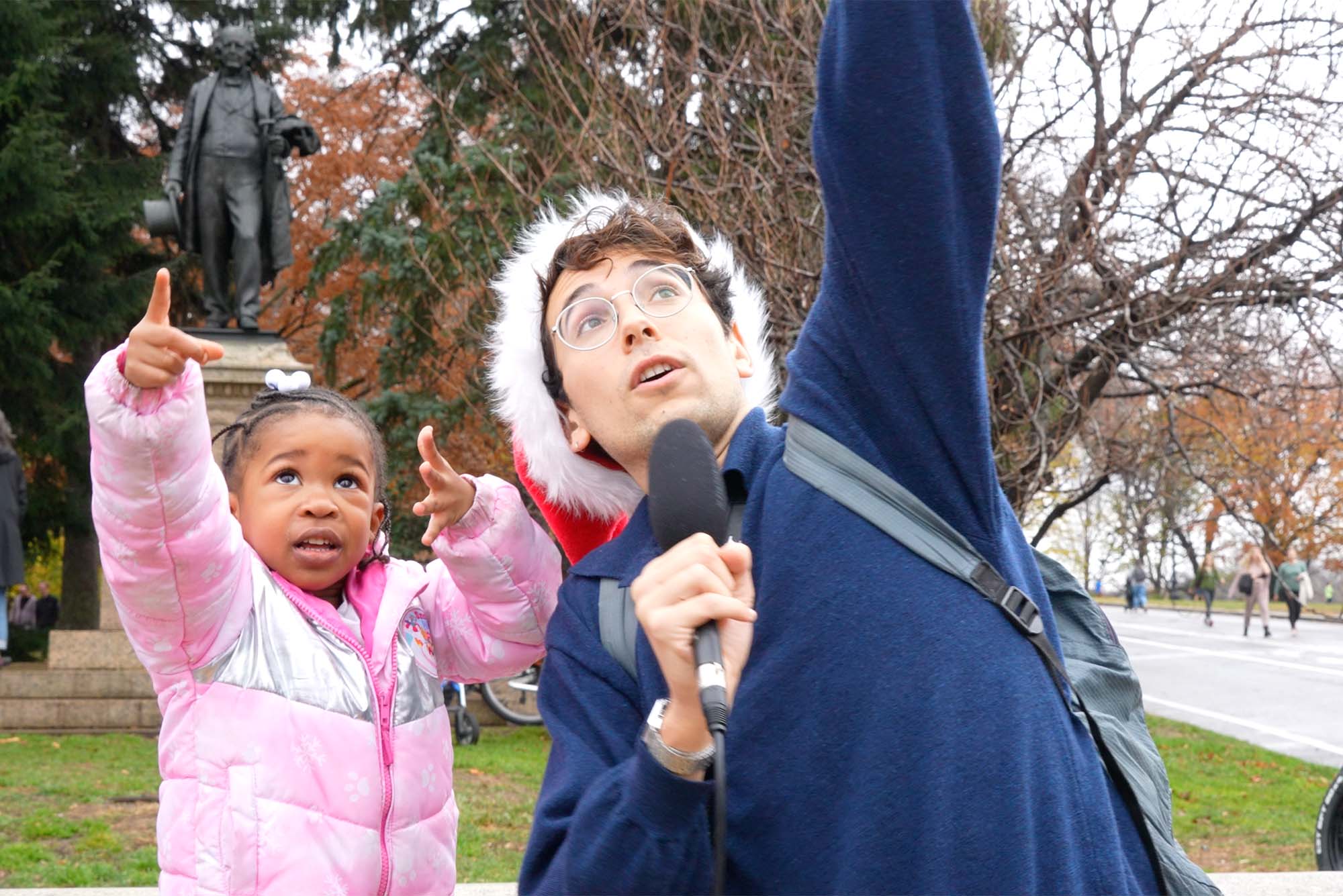 For his senior thesis, Julian Shapiro-Barnum (CFA’21) filmed children at a playground telling him how they stay happy. He turned the three-minute video in to his professor—and to the CEO of an online content company, who commissioned him to do more videos, on topics like children’s experiences with death and whether aliens exist. Two million Instagram followers later, Recess Therapy is a hilarious, feel-good hit.

Editor’s note: This story will appear in the Fall 2022 issue of CFA magazine.

Julian Shapiro-Barnum originally intended to write and perform a monologue as a historical figure for his College of Fine Arts senior thesis, but the acting major wasn’t feeling inspired. So instead, he grabbed a camera and headed to a Boston playground to ask children how they stay happy.

“It’s now been over a year since COVID’s been around, and I’ve been feeling incredibly down recently,” Shapiro-Barnum (CFA’21) says in the video’s introduction, filmed in April 2021. “I knew I needed to talk to someone, so I went to the playground.”

Their answers to the question “What do you do when you’re feeling sad?” ranged from “sit completely still” to “drink a lot of water and go to sleep” to “play with my cousins.”

Shapiro-Barnum edited the 45 minutes of footage into a quick-cut, nearly 3-minute video and turned it in to his professor. He also sent the final project to the CEO of an online content company, Doing Things Media, that he had done some technical work for. They loved it, and before he knew it, they provided the then-BU senior with an editor and a small budget and commissioned him to crank out videos of children answering questions on a variety of topics, such as their experiences with death and their thoughts on whether aliens exist.

Two million Instagram followers later, Recess Therapy is a hilarious, feel-good hit. No matter how serious the topic, every video is funny. He once asked a kid to spell the worst word he knows (“s-t-o-o-p-i-d”) and had a girl tell him she thinks pigeons are government spies. A recent video of Corn Kid, a little boy relishing his corn on the cob, had almost two million likes on Instagram. The boy, whose name is Tariq, was even named South Dakota’s official “Corn-bassador.”

The web series’ success likely wouldn’t surprise Shapiro-Barnum’s five gay parents (his biological mom and her ex-wife, his biological dad, his dad’s husband, and a step-mom), his high school and CFA teachers, or his camp counselors. Growing up, he knew everyone in his Cobble Hill section of Brooklyn, and he was the kind of kid he’d interview for Recess Therapy, he says.

At BU, Shapiro-Barnum thought he wanted to be a playwright or a puppeteer, and names Muppets creator Jim Henson, Mister Rogers, and Steve from Blue’s Clues as his biggest creative inspirations. Today, stars like John Mayer, Demi Lovato, and Jennifer Aniston follow Recess Therapy and like and comment on his videos. “I’d really like to bring some celebrities on the show,” he says.

So, how does Shapiro-Barnum get kids to open up on camera to a complete stranger—and be funny? He likens it to fishing. He starts with a loose topic—like what they think of the internet—and dangles it like bait in front of a kid.

“A lot of times they won’t know or they won’t care,” he says. “But once I’ve found the right flavor of a thing, a kid will take it and run with it. I’m just trying to provide them with leading questions that will bring their ideas to the next level. I think it’s one part listening, but another part me trying to use my comedic mind to shape the conversation.”