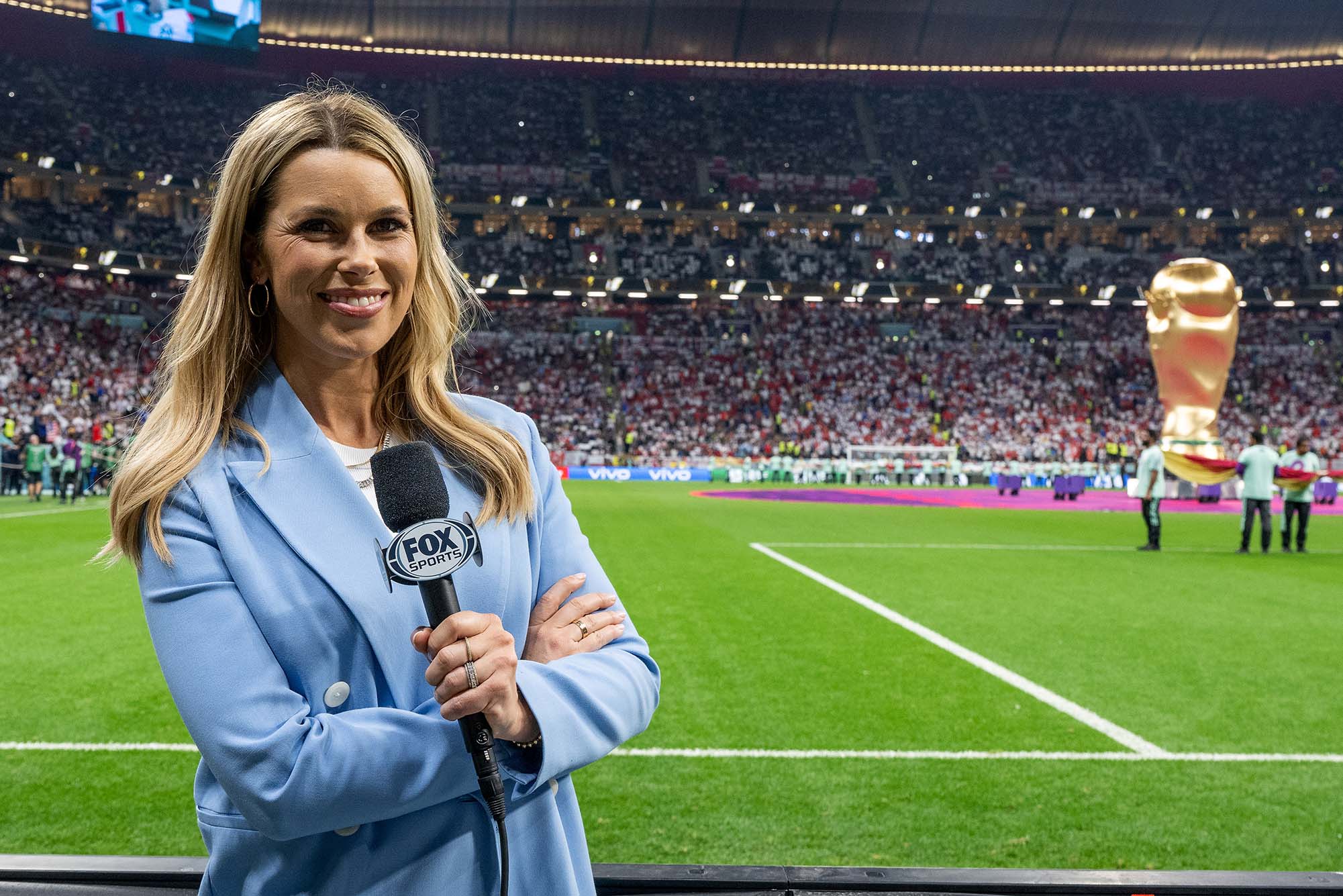 Jenny Taft knew she wanted to go into broadcasting after filming a live stand-up outside of Fenway Park for a sports journalism class. “I still have the video from it,” says Taft. “I remember thinking, I want to do this. I want to be around sports.”

Since then, Taft (CGS’09, COM’10), now a reporter and host for FOX Sports, has broadcast from the Super Bowl and hosted the Westminster Kennel Club Dog Show. She’s covered Major League Baseball, college football, and two US Women’s National Team World Cup titles. For the past month, she’s been covering the men’s FIFA World Cup in Qatar as a sideline reporter, where she had a field-level view as the US Men’s National Team qualified for the Round of 16 with a 1-0 win against Iran and then as their tournament ended with a 3-1 loss to Netherlands.

She has also experienced tragedy: American soccer journalist, friend, and former colleague Grant Wahl collapsed and died of an aortic aneurysm during a match on December 9. Earlier the same day, Wahl had been trying to help Taft secure an interview with Kylian Mbappé, France’s star forward.

Taft spoke with Bostonia about the triumphs and tragedy of the World Cup—and provided a sneak peek of what she expects from Sunday’s Argentina-France final.

Bostonia: How does the World Cup compare to other events you’ve covered?

Taft: The World Cup is extremely unique and special. I’ve covered “The Game”—Michigan vs. Ohio State—and I’ve been a part of the Super Bowl. But with a World Cup, you see the world coming together. When you see these Argentina fans and Morocco fans that just embody the game in so many ways, seeing them come together and seeing the world on display—that’s what I love most about it.

Bostonia: Boston is known for its passionate sports fans—how do Fenway’s bleachers compare to what you’re seeing at these World Cup matches?

Taft: I just did Argentina-Netherlands and I hate to offend Boston fans, but it was the loudest game I’ve ever been a part of. The Argentine fans do not stop the noise. And every fan base around the world has a different style. I was at France-England, and the momentum would shift in the match and then the fan noise shifts. It’s really an incredible experience.

I just did Argentina-Netherlands and I hate to offend Boston fans, but it was the loudest game I’ve ever been a part of.

Bostonia: Sideline reporters have to provide very concise information during games—could you give us a behind-the-scenes look at the work that goes into that?

Taft: When I was on the US beat, that was a very different role than now, where I’m covering France. What’s so unique about a World Cup is that it’s a world feed. FOX Sports is the rightsholder for the United States, so when the United States is playing, I have priority. I get to interview the coach, I get to do interviews after the match, and every other rightsholder has access to those interviews. I’ve been trying to get a one-on-one with Kylian Mbappé [of France], but he doesn’t have to talk to me because we’re not the rightsholder. So the access becomes more limited when your team exits.

When I was with the United States exclusively, that meant going to training every day and doing interviews with players. I ended up hanging at the coffee shop in the team hotel, and I got to know the families and wives and see their kids. That’s where those stories and that insight comes from.

Bostonia: With this World Cup being held in Qatar, a lot of the stories have not been sports stories—they’re stories about the death of migrant workers and human rights issues. How have you and your colleagues balanced that with your responsibility for covering the event?

Taft: It’s been hard. This is a side note, but I was very close with Grant Wahl, who passed. So that’s been an emotional couple of days. It’s heartbreaking because it doesn’t really add up. That’s been really a hard thing for all of us.

I think that being here in Qatar has given me perspective on how much I appreciate the United States. I think Qatar has made strides, but they’re obviously still not there in terms of what we expect and demand in America. So I’ve gained an appreciation for what we have back home and for being a female in the role that I have and the opportunities I have in America. It’s not like that everywhere in the world. There have been hard moments here, but I also have seen so much joy. The soccer is what matters and that’s really refreshing to see. I’ve tried to appreciate why a World Cup is so special, but that doesn’t change the fact that I think that there are strides that need to be made.

“Thank you guys so much for the support… We wanted it so bad, and I hope we gave you some kind of excitement and showed you what this country is about, what this team is about.”

Bostonia: Given all that’s going on in the world, why do you think sports matters so much to so many people?

Taft: Sports brings people together. It’s a joy. It’s a community. It’s a passion. There’s something really refreshing and inspiring about seeing athletes commit their entire lives for a moment. Maybe we’re all inspired by that, in some ways. I grew up around sports—my dad was a hockey player and I’m married to [Hobey Baker winner] Matt Gilroy (MET’09), who played hockey at BU. So I’ve only ever known sports as a passion, and I love the storytelling. So the fact that I get to be around athletes and tell their stories, it’s such a joy and an honor. I have a young daughter at home and I keep thinking that in a couple of years, when she understands, she’ll be like, “Wow, my mom was a strong female in the sports world.” That excites me.

Bostonia: Do you have a favorite moment from the World Cup so far?

Taft: Being around the United States and seeing them progress, being around the energy leading up to that match—it was very tense and just the way they were able to deliver in that moment [defeating Iran 1-0 to advance to the Round of 16]. I saw a lot of stars born. Tyler Adams, the captain of the US team, is just as incredible in person as he comes across on the pitch. And then Christian Pulisic having that goal [versus Iran], that World Cup moment. The emotion when they lost was pretty heartbreaking, but the fact that they’re young and now seeing the potential, it really excites me. I think they know that they’re not in their prime. It’s fun to think that they’re going to be able to carry that momentum [into 2026].

Bostonia: What storylines will you be following in Sunday’s final?

Taft: It’s hard to pick a favorite for the final. France is trying to do something that hasn’t been done in 60 years—repeat as World Cup champs—and this is [Argentina star] Lionel Messi’s last World Cup. Wow! Sunday is going to be special.