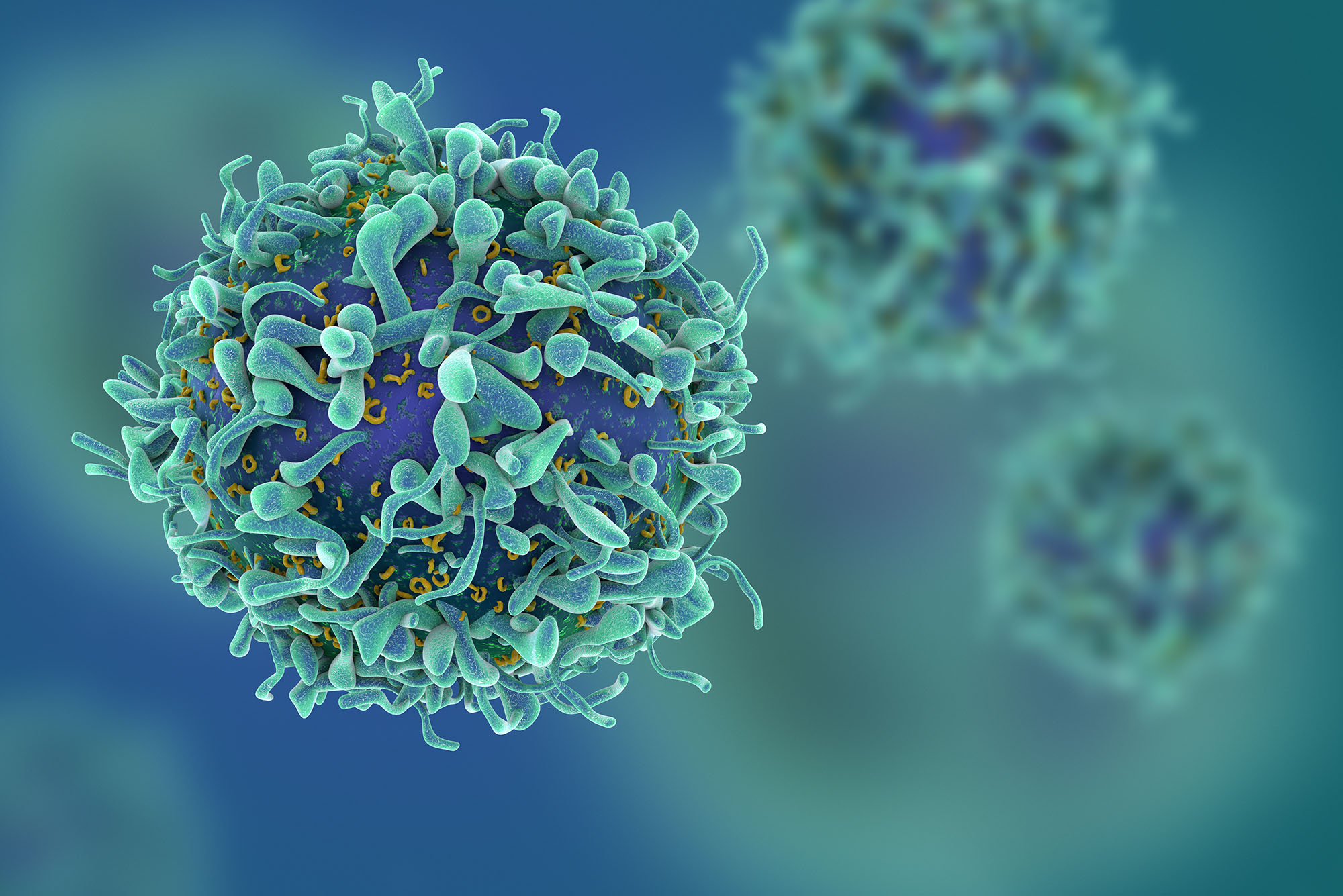 T cells, a type of white blood cell that defends the body from invaders, can be modified by scientists to attack cancer cells. Researchers at Boston University are developing a way to make this revolutionary cancer treatment safer for patients. Photo by cgtoolbox/iStock

The billions of immune cells that help protect us from diseases do amazing things, but sometimes they need a little boost. For decades, scientists have been trying to figure out ways to engineer living immune cells to better combat aggressive diseases, like cancer.

One big, relatively recent advancement in the fight against cancer is CAR T-cell therapy, a treatment that involves modifying immune cells called T cells, microscopic powerhouses that take on infections. Scientists have figured out a way to remove T cells from a person’s blood, insert a special kind of gene called a receptor, which binds to cancer cells, and transfer the engineered T cells back to the patient. This type of receptor—a chimeric antigen receptor, or CAR—is tailored to match the specific cancer being targeted and has been found to be effective for treating certain types of cancer, especially leukemia. Once CAR-T cells reenter the bloodstream, they start to replicate and begin their fight.

“It is very exciting technology,” says Wilson Wong, a Boston University College of Engineering associate professor of biomedical engineering, who has been studying CAR-T cells for over 10 years. But there are problems with safety, he says, that can make the therapy extremely risky.

At times, CAR-T cells overstimulate the immune system, which triggers the release of a substance called cytokine. This can cause a potentially fatal inflammatory condition known as cytokine release syndrome. Other serious complications can include neurological difficulties, or other organs in the body being mistakenly targeted by the immune cells.

To make this groundbreaking therapy less risky for patients, Wong and a team of researchers are working to create a safety switch built into the CAR-T cell design. In a new paper in Cancer Cell, the researchers reveal a new type of CAR-T cell that can be turned on or off, making it possible to stop cells from activating before severe side effects occur.

Their new system is called VIPER CAR-T cells. VIPER—which stands for Versatile ProtEase Regulatable—cells are engineered so they can be controlled by giving a patient an antiviral drug that disrupts the cell’s activity, lessening the safety concerns that come with traditional CARs.

“We see this as the next generation of this type of therapy,” Wong says.

In all CAR-T cells, part of the receptor sticks out of the cell membrane, while part of it is inside the cell. The part sticking outside of the membrane binds with cancer antigens, which then activates the T cell and destroys the cancer cell. VIPER CAR-T cells have a special protein chain inserted next to the receptor. The researchers created two different systems—one that is switched on at the time the VIPER CARs are transferred back to a patient, and one that is switched off. The two systems work slightly differently, but can both be turned off or on by the patient taking an FDA-approved drug that is typically used for treating hepatitis C.

We see this as the next generation of this type of therapy.

“That is the most exciting part of this study, that the antivirals are already FDA approved,” says Huishan Li, lead author of the paper and a postdoctoral fellow in Wong’s lab and the Khalil Lab. When administered, the drug molecule interacts with the inserted protein chain, kicking off a series of reactions in the cell to make it disengage, or activate, depending on which system is being used.

The research team included John T. Ngo, an ENG assistant professor of biomedical engineering, and Ahmad S. Khalil, an ENG associate professor of biomedical engineering and associate director of the Biological Design Center. Scientists have crafted other CAR-T cell systems that are controlled by pharmaceuticals, but this is the first that has two modes of operation—on or off. The two modes can allow doctors to target the cancer more aggressively, since it will be possible to dial down the treatment if necessary, Wong says. Alternatively, if there is any uncertainty, doctors could turn the VIPER CAR-T cells on incrementally.

For now, this work was done in cell cultures and mice. And to further test their approach, the research team compared their results to other similar studies, finding that VIPER CAR-T cells outperformed other systems. They also used VIPER alongside other types of CARs within the same T cell—meaning, the T cell was engineered with two different cancer-fighting receptors. This can potentially allow for the engineered T cells to target two different cancer markers at one time, Wong says, opening the door for even further advancements in cancer gene therapy.

“We not only have a safety control in place, but we also can have multiple versions at the same time,” Wong says. After perfecting the technology in the lab, the team’s long-term target is bringing the technology to humans in clinical settings.

This work was funded by the National Institutes of Health.