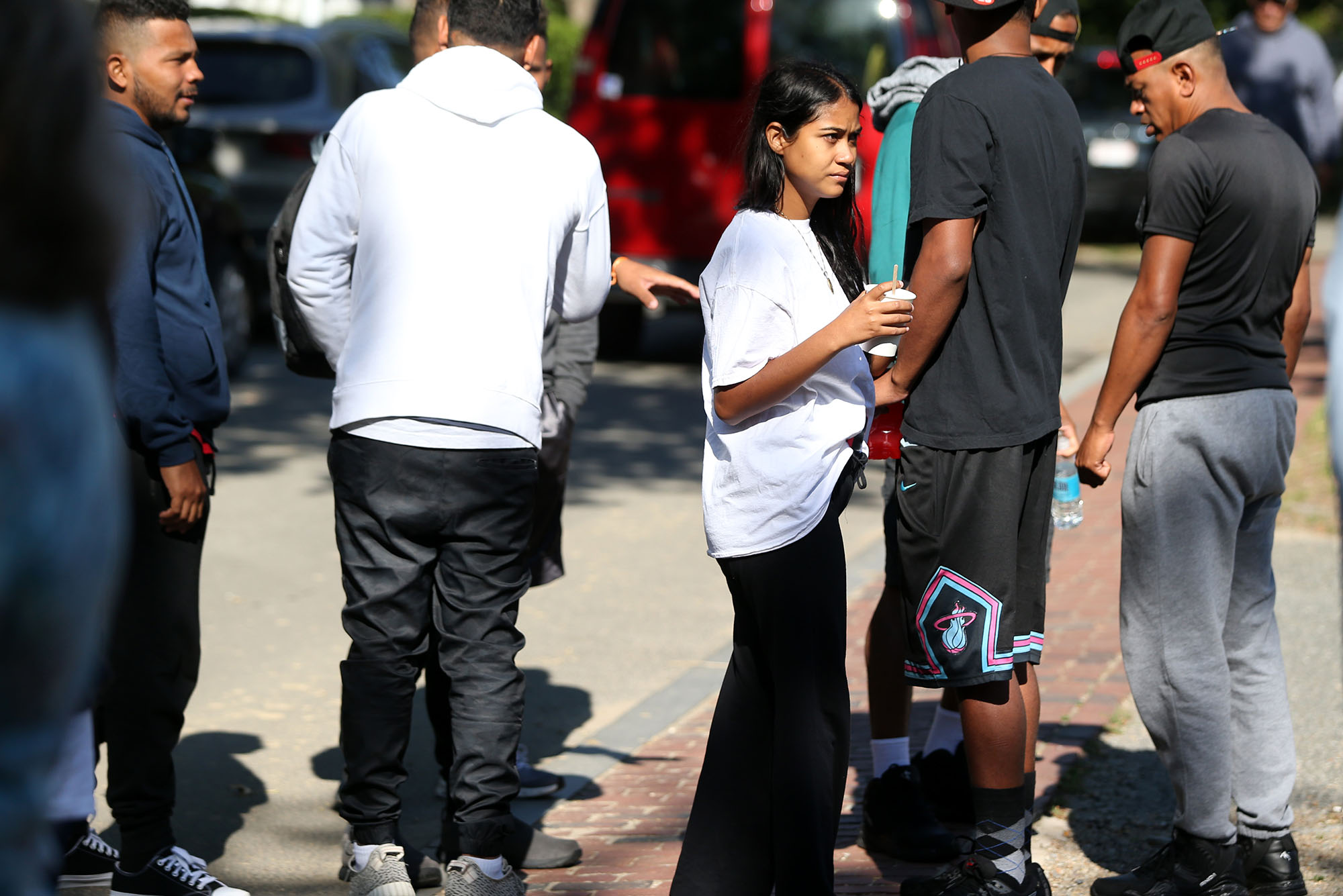 Massachusetts officials say Florida may have broken the law by transporting 50 Venezuelan immigrants to Martha’s Vineyard on September 14.

Rachel Rollins, US Attorney for the District of Massachusetts, says she’s reviewing whether the unannounced transport violated laws against human trafficking, coercion, or other crimes. Lawyers and aid workers on the Vineyard report that the immigrants were lied to about jobs and housing awaiting them in Massachusetts, about landing in Boston, and about having to register their new addresses with federal citizenship and immigration officials.

Florida Republican Governor Ron DeSantis threatened such transports to the Vineyard for months, but Julian Cyr, the Massachusetts Democratic state senator representing the island, says Florida didn’t notify Massachusetts officials of the transports, which he calls “disgusting” and “a political stunt.” Local business and nonprofit volunteers fed and temporarily housed the immigrants. Governor Charlie Baker’s administration meanwhile has set up temporary services on Joint Base Cape Cod, where the migrants were taken on Friday.

The move by DeSantis, a candidate for reelection in November and possible 2024 presidential aspirant, happened at the same time Texas Republican Governor Greg Abbott sent two busloads of migrants from his state to Vice President Kamala Harris’ doorstep in Washington, D.C. The two governors say they’re protesting record numbers of unauthorized immigrants in the last year.

The transports, DeSantis’ office said in a statement, “were part of the state’s relocation program to transport illegal immigrants to sanctuary destinations.…States like Massachusetts, New York, and California will better facilitate the care of these individuals who they have invited into our country by incentivizing illegal immigration through their designation as ‘sanctuary states’ and support for the Biden Administration’s open border policies.” (Reality check: there is no open border; many of the migrants sought entry to the United States under its asylum laws and either surrendered to, or were arrested by, federal authorities.)

“We’re ready to help,” says Sarah Sherman-Stokes, a School of Law clinical associate professor and associate director of its Immigrants’ Rights and Human Trafficking Clinic, who reached out to Vineyard officials. “We have Spanish-speaking law students. We have law students who are trained on asylum law and intake.” She assesses the situation for BU Today.

BU Today: Does Massachusetts have the capacity to humanely resettle these folks on such short notice?

Sherman-Stokes: I’m really proud to be a Massachusetts resident today. This is a crude political tactic by DeSantis to try to score political points by playing with people’s lives. Massachusetts has stepped up and said, No. We’re going to welcome this community of people. Martha’s Vineyard has been amazing. We’re seeing people bring food; I saw AP Spanish students from the high school come to help interpret. It’s all the best things about Massachusetts and about the way we care for people.

In my experience working with immigrants for almost 15 years, these are folks that add value to our community, they work in our community, their kids go to school with our kids, they go to the same churches and synagogues and mosques as our families. The idea that they’re going to be a drain or a burden is the wrong framework.

Watch the smiles and hugs between Martha's Vineyard residents and the Venezuelan migrants, who were recently flown there by Gov. Ron DeSantis (R-FL) in a political stunt, as they board buses to Joint Base Cape Cod. pic.twitter.com/FqLZbWoE32

Martha’s Vineyard residents say goodbye to the Venezuelan migrants they helped for several days after they were flown to the island, unannounced, by Florida Republican Governor Ron DeSantis in a political stunt. The migrants were headed to the mainland, on Joint Base Cape Cod.

BU Today: Might the DeSantis administration have broken any laws with the transports?

I don’t know. There’s no doubt that what DeSantis did is morally reprehensible and disgusting. These are mostly asylum seekers. They’re probably fleeing persecution and trauma. The act of migrating involves danger, risk, grief. The idea that trickery and deception was used on these people is completely appalling. I think it’s a live question whether this runs afoul of any civil or criminal statute, and I’m glad that Rachel Rollins is looking into it.

BU Today: Do border state governors have a legitimate point in saying that self-declared sanctuaries should help resettle immigrants as long as our immigration system is broken?

What drives migration? People don’t just wake up one day and say, you know what I’m going to do today—I’m going to risk my life and the lives of my children to travel hundreds of miles through dangerous terrain to risk going to the United States. That’s a decision made out of desperation, because people are unable to feed themselves and their children, because they’re fleeing torture, persecution, and trauma. What’s driving people in many cases is our foreign policy, trade agreements, things these Republican governors would support, until they end up driving people out of their countries to the southern border.

BU Today: In fairness, Venezuela has not been a model of democratic, economically well-run governance.

Sure. But US foreign involvement in Venezuelan politics—including the tacit approval of a coup attempt against [President Nicolás] Maduro’s predecessor, Hugo Chavez, in 2002—played a destabilizing role in that country. You can’t have it both ways. I doubt that the Republican governors of the border states are Maduro supporters. They see him as a socialist. So why aren’t they welcoming people who are fleeing his regime? This is a political stunt by Governor DeSantis to gain points in his reelection campaign. It’s unfair to these families who are just trying to seek safety in the United States.

We’re seeing people bring food; I saw AP Spanish students from the high school come to help interpret. It’s all the best things about Massachusetts and about the way we care for people.

BU Today: The conservative Boston Globe columnist Jeff Jacoby (LAW’83) says that red state governors goofed with the transports, because immigrants are economic pluses in their communities. Will Massachusetts have the last laugh over DeSantis?

Yeah, that’s right. Immigrants are a net benefit to our economy and community. They add value in financial terms, but more importantly, in social and cultural terms. This idea that DeSantis is trolling the libs by dropping a planeload of immigrants on our doorstep is laughable, because Martha’s Vineyard met the plane with open arms, and we’re going to benefit from what immigrant families are going to provide to our community.

BU Today: What’s the ultimate fix for our immigration system?

The goal is to make authorized migration more accessible to people who need it. It’s going to take a multifaceted approach. I come at this from perhaps a more radical stance than many, having worked with folks in detention; we need to seriously consider overhauling, if not abolishing, US Immigration and Customs Enforcement (ICE). There is more than enough evidence that this is a toxic agency that is rotten at the core. It is imbued with racism and xenophobia. The abuse inside ICE detention facilities is appalling. This idea that enforcement is a deterrent is misguided when you have people who are running for their lives or can’t feed their families. They will not be deterred. The alternative is to remain in their home countries and risk their lives.

BU Today: The late US Senator John McCain (R-Ariz.) proposed overhauling the system and the pathway to citizenship for undocumented immigrants. He got his head handed to him, and he said the lesson was, we are never going to do right by these folks unless we can assure people that there are rules to get in.

I am not a policymaker. I am in a fortunate position where I talk with my students and clients about imagining a future that looks very different than the one we currently have. I don’t think we should be stuck within the framework of what we need is border security. The idea that we have a homeland we need to secure is a really dangerous narrative. It creates an us-versus-them setup. No wonder people want us to be secure when the press has drummed up this idea of a foreign threat. That’s not who my clients are. That’s not the people who are coming across the border. These are people who are looking to contribute to our communities and do for their families what we all want for our family, which is a safe and secure future.

There are 23 comments on Florida Governor DeSantis’ Transport of Migrants to Massachusetts Is a “Crude Political Tactic…Playing with People’s Lives,” LAW Expert Says