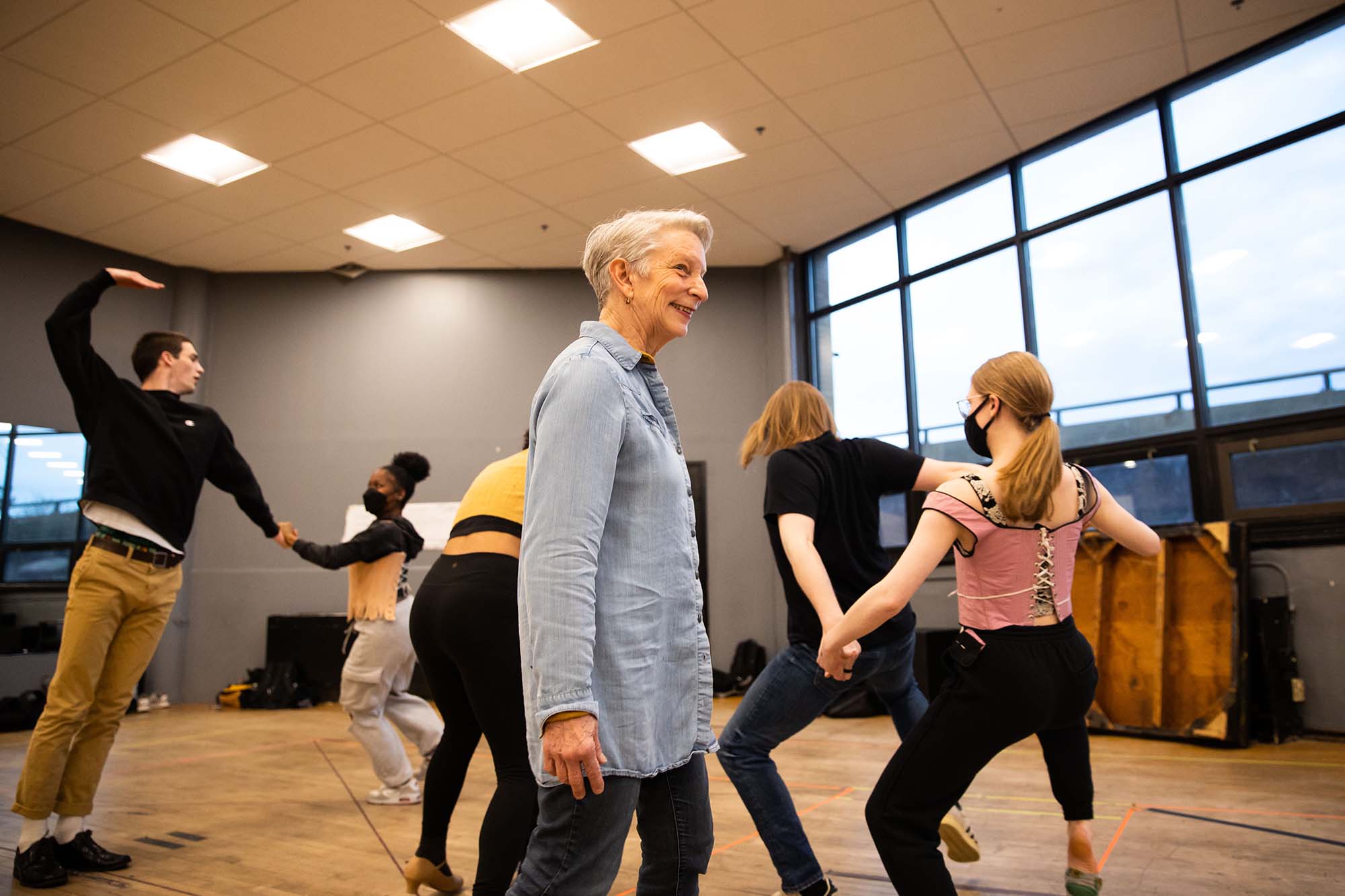 Judy Braha (CFA’08) comes into the rehearsal room every day with a “clear, set plan” about what needs to be done, her students say.

In a College of Fine Arts rehearsal studio, where a wall of windows frames the hurtling traffic of the Mass Pike, Judy Braha is re-creating 1593.

Shakespeare in Love, the theatrical adaptation of the 1998 film, tells a fanciful story of off-stage love affairs and theatrical intrigues surrounding William Shakespeare as he faces writer’s block while penning Romeo & Juliet. The film, which starred Joseph Fiennes and Gwyneth Paltrow, won seven Oscars, including Best Picture. The screenplay by Marc Norman and Tom Stoppard has been adapted for the stage by Lee Hall.

“My daughter was a big fan of the movie when she was a teenager; we watched it like, 75 times or something,” Braha says with a laugh. “It’s a very big cast for us, 19 people, and it’s a beautiful play. It’s kind of a monster—it has everything in it. It has swordplay, dialect, intimacy, and dancing and singing…

“There’s a very farcical aspect to this play, which is not usually my thing,” she says. “But it’s a good time to do this play, a love letter to theater.”

The way COVID silenced theaters for many months “really makes you cherish live performance,” Braha says. “Sitting in a dark room with a whole bunch of people and experiencing the same thing together, and afterward feeling different or feeling the same or you don’t even know what to feel. The more people who can have that experience the better, because it makes people better, and it makes us better to tell those stories to them.”

The year 1593 was a plague year in London. Braha doesn’t want to give away any spoilers, but expect her Shakespeare in Love to “collide with” the COVID shutdown and the reopening of theaters. Perhaps not coincidentally, one or more of the BU cast has been missing at nearly every rehearsal because of a positive COVID test or a related illness, she notes.

In Braha’s production, Henry Morehouse (CFA’22) plays Will, Mya Ison (CFA’22) is Viola de Lessups (the role that won Paltrow a Best Actress Oscar), and Jenna Giordano (CFA’22) is Queen Elizabeth (Judy Dench scored an Oscar as Good Queen Bess). The student actors have no doubts about Braha’s ability to keep it—and them—on track, as director and as teacher of a professional skills class many of the seniors are taking.

“Judy Braha is a beast!” Giordano says, and quoting from Shakespeare’s A Midsummer Night’s Dream: “‘Though she be but little, she is fierce.’ That is Judy Braha. She comes into the rehearsal room every day with such a clear, set plan about what we need to get done.”

Acting majors spend an entire sophomore-year semester learning fundamentals of acting from Braha, “and as a senior I find myself constantly going back to that class as the foundation for everything I do,” she says.

As an example, she cites Braha’s oft-used adage, “The answer is in the other person,” meaning that the way to resolve an acting challenge is to look to your scene partner. Giordano has found that key to playing a larger-than-life icon like Elizabeth I—by connecting in a human way with the other person in front of her.

“Judy is always the person who is most excited to be there in the room, in a wonderful way,” says Morehouse. “I wanted to work with her again so badly because of how I thought we got along the last time we worked together, and because this was her final show here, and I thought there was going to be some sort of magic in that.”

The class the seniors are taking with Braha, he says, boils down to an audition-prep class, and her notes are consistent. “It’s commitment to the story that needs to be told,” Morehouse says. “It’s important to understand when you’re doing a one-minute piece out of context, one of the many tricks to doing that is that it’s not an audition piece, it’s part of a play, and you need to tell that part of the story of the play, you need to do your work before you get into the room and invest into the story and what part of your heart speaks to the story.

“The insight and the thrill that can come of that is one of the best things about this job,” he says.

“It’s important to me to help people feel their feelings about things they don’t want to think about, and open people up to issues they’ve never considered,” Braha says. “I think that’s an important mission in the theater, and that’s my mission, that’s why I do it.”

Her directing projects at BU have included Our Class, about a Polish town’s massacre of its Jewish neighbors, and The Exonerated, focused on the stories of six real men and women who were wrongfully sentenced to death in the United States. She has also collaborated with the BU Prison Education Program and with the Prison Arts Program run by André de Quadros, a CFA professor of music and music education.

Shakespeare in Love “has everything,” Braha says. “It has swordplay, dialect, intimacy, and dancing and singing.”

“A couple of students came up to me, students with whom I don’t perceive myself as their favorite person, and they said, ‘You choose very interesting plays…we really learned something and had to think about something in a new way,’” Braha says, “and that was a wonderful thing to hear.

“Training artists in the world at any time, but particularly right now, you want to think about them as citizen artists, as arts activists, as people who really want to go out and say something that is important to them,” she says.

“The thing I love about Judy Braha is her absolute devotion to the students and the work,” says Susan Mickey, School of Theatre director and a professor of theater. “She is dedicated completely to the individual artist standing before her and their growth in the practice. It’s inspiring and infectious.”

“The fact that our paths got intertwined was a blessing,” says Horne, who sought out Braha as a mentor during her years at BU. “When I was [graduating], she nominated me for the Esther B. and Albert S. Kahn Career Entry Award, and I won that, and it was a huge thing, knowing that I was one of the first in my family to go to college, much less graduate. That financial award kept me artistically involved for the first few years of my artistic career. It changed the trajectory, and she’s responsible for that.”

It’s important to me to help people feel their feelings about things they don’t want to think about, and open people up to issues they’ve never considered.

After Commencement, Horne says, “I would be in rehearsal processes, and I’d be kind of freaking out, and I’d be like, ‘Judy!’ And Judy would be there for me and just remind me of the fundamentals I needed. She’s an advisor and a friend and a mentor to this day. She’s always just a call away.”

Research and understanding historical context is a Braha trademark, which was important to Horne when she was working recently on Fires in the Mirror, a one-woman, multicharacter show by Anna Deavere Smith, at a regional theater in Baltimore, where she had to play several Jewish characters. “She was able to unlock this understanding of where the spirit of education comes from within that faith background, and understanding that really transformed my ability to connect to this identity,” Horne says. “She has a deep intelligence and a rigor around the work and the historical context, and understanding where the personal comes in contact with that.”

Braha may be retiring from BU, but she will continue pursuing her prolific outside directing career. She will direct two plays this summer, Mr. Fullerton Between the Sheets at Gloucester Stage, about Gilded-Age novelist Edith Wharton’s first love affair at age 46, and Things I Know To Be True at Great Barrington Public Theater, a contemporary family drama.

And while Shakespeare in Love may not seem like the sort of socially engaged work Braha normally chooses, its subject is just right for this moment, she says.

“We didn’t know if theater was going to survive this period,” she says, “and a lot of our focus is on this issue: how theater artists overcome no matter what is going on in the world, no matter how little money they are making or how little work there is, how they overcome and bring their stories to tell to the people who need them. It feels like a good moment to do this play.”

Stage version of the 1998 film about William Shakespeare, backstage intrigue, and romance as he’s writing Romeo and Juliet. Tickets, $20; free with BU ID at the box office 30 minutes before curtain, subject to availability.