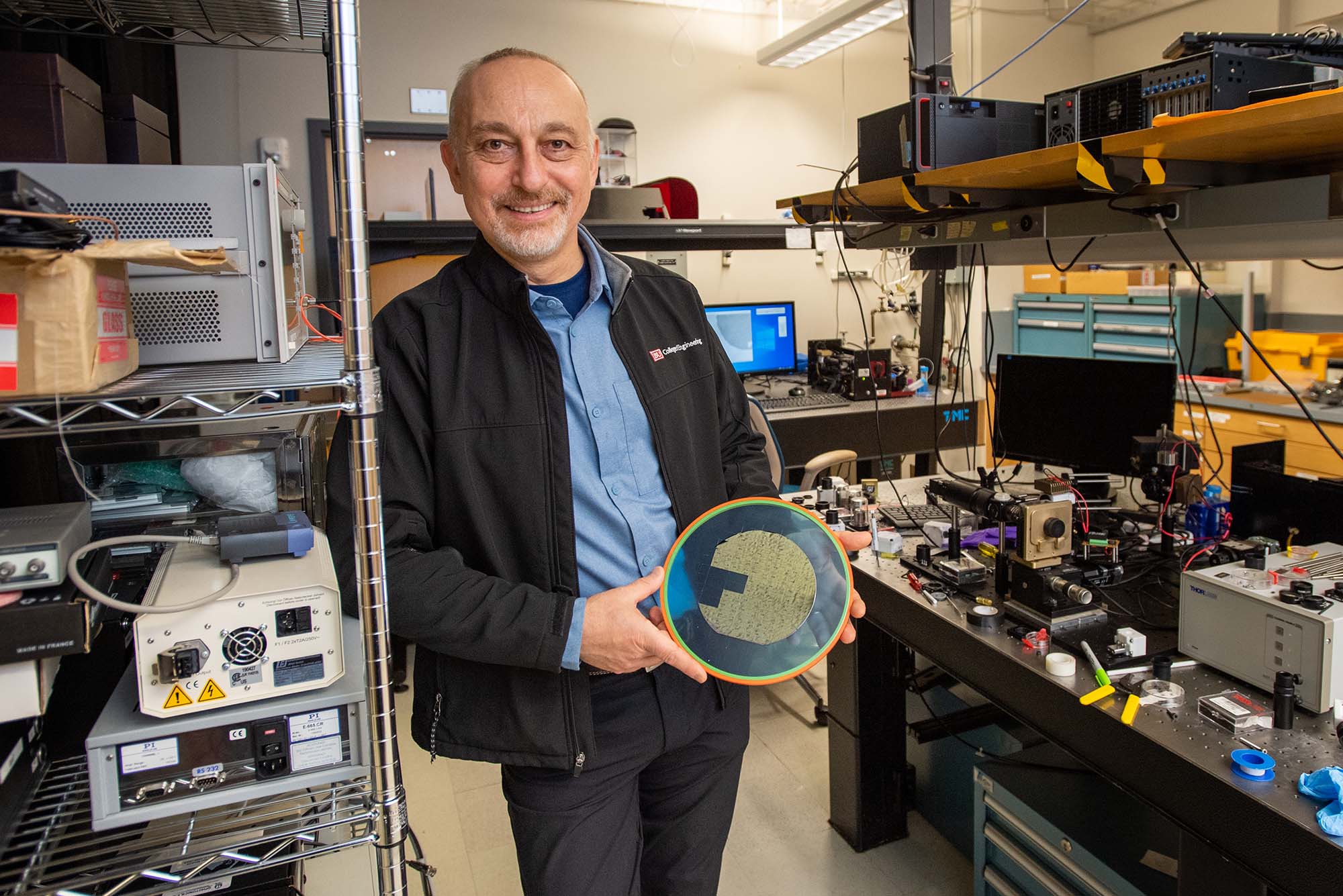 Selim Ünlü, a BU College of Engineering professor of electrical and computer engineering, has pioneered devices and technologies that help hunt for security flaws in the construction of computer chips and detect viral pathogens in medical samples.

To help students invent the technology of tomorrow, Selim Ünlü starts with a lesson about the breakthroughs of the past

Electrical and computer engineer Selim Ünlü’s lab is filled with the future, a hotbed of technological innovation that brims with gadgets. Much of what’s happening sounds like it could’ve been pulled straight out of science fiction: high-resolution subsurface imaging techniques to study the spectroscopy of quantum dots, nanoscale microscopy to examine fluorescent molecules, imaging biosensors for DNA arrays.

And yet one of the first lessons his students get isn’t about the technology and science of tomorrow, or even the present—it’s about the breakthroughs of the past. Ünlü, who has been named Boston University’s 2021 Innovator of the Year, shares with the class a few stories about history’s pioneers and visionaries.

“Science history is extremely important,” says Ünlü, a BU College of Engineering professor of electrical and computer engineering. Instead of jumping in to teach sophomores essential engineering rules, like voltage divided by current equals resistance or the diffraction of light around objects, he puts them in the shoes of the people who first calculated those theories—such as American physicist Albert A. Michelson and English mathematician and astronomer George Airy—telling lively tales of how they put names to dazzling new concepts.

“If you learn something at this level, with these anecdotes around it, with historical things, you will not forget it,” he says. “Otherwise, it’s just equations you memorize. That’s not how people figure things out. Knowing what people thought at the time is instrumental for someone learning the subject. A hundred years ago, much smarter people struggled with these concepts.”

It’s characteristic of Ünlü that his students get a lesson on ingenuity and invention on day one—and that it probably isn’t the lecture they expected.

As they travel through his classes—and perhaps into his Optical Characterization & Nanophotonics Laboratory as doctoral students and researchers—they’ll get used to his novel approach to innovation.

Ünlü holds 18 patents (with more pending) and has helped launch three companies, all focused on using light to make precise measurements. And yet he describes himself as someone who doesn’t look for big innovations, but smaller, more iterative ones.

“Magnetic resonance imaging, MRI, is fantastic and the idea came out of physics—I don’t think I can do such things,” he says. “My strength is that I can see a new application of some simple concept.”

Much of Ünlü’s work is concentrated in what’s called interferometric sensing, a photonics discipline that uses light waves, or photons, to make extremely accurate measurements. He has pioneered devices and technologies that help hunt for security flaws in the construction of computer chips, detect viral pathogens in medical samples, and look for microscopic disease clues in cells and tissues. A fellow of the American Institute for Medical and Biological Engineering, the Institute of Electrical and Electronics Engineers (IEEE), and Optica, he’s also a former editor in chief of the IEEE Journal of Quantum Electronics.

One of his signature inventions is a biosensing technique called Interferometric Reflectance Imaging Sensor (IRIS), which can help researchers scrutinize biomolecules—such as nucleic acids and proteins—and biological nanoparticles, which can include viruses, with exceptional sensitivity. It’s been used to help detect pathogens and support drug development and other life sciences research.

“Professor Ünlü has a knack for recognizing inventions in the experimental results from the laboratory work—sometimes it is just a small tweak to an optical design that unlocks a strong detection signal,” says Michael Pratt (Questrom’13), managing director of technology development at BU. “In a way, he mirrors his own invention by having the ability to see things in the data that other people—or other technologies—miss.”

Learning from Others’ Mistakes

Ünlü traces his approaches to teaching and mentoring back to his own early career experiences—but not because they were necessarily all positive ones. He says he was never taught how to protect his intellectual property and had an advisor who ruled by fear. He’s learned from others’ mistakes, being a friend to his students (he used to play on an intramural soccer team with them) and having complete transparency about his work outside of BU—including how much his consulting pays. He also frequently includes students in his patent applications and fledgling businesses so they can see how to protect and monetize ideas.

“In Selim’s lab, we focused on solving real-world problems, which allowed us to come up with practical and translatable solutions,” says George Daaboul (ENG’09,’13), who was mentored by Ünlü during his doctoral studies. He’s now chief scientific officer at NanoView Biosciences, a biotechnology company he cofounded and that has its roots at BU. “NanoView’s core technology was developed in Selim’s lab. I benefited a lot from Selim’s mentorship—he allowed us autonomy in his lab, which enabled us to be independent, but he was very supportive when needed.”

In the classroom and in the lab, Ünlü aims to give his students time for unstructured free thinking—he hopes it opens their minds, giving them space to innovate.

“Curiosity is hard to teach,” says Ünlü. “Everybody can work hard, but you cannot force yourself to be more curious—as a role model, I’m always curious.”