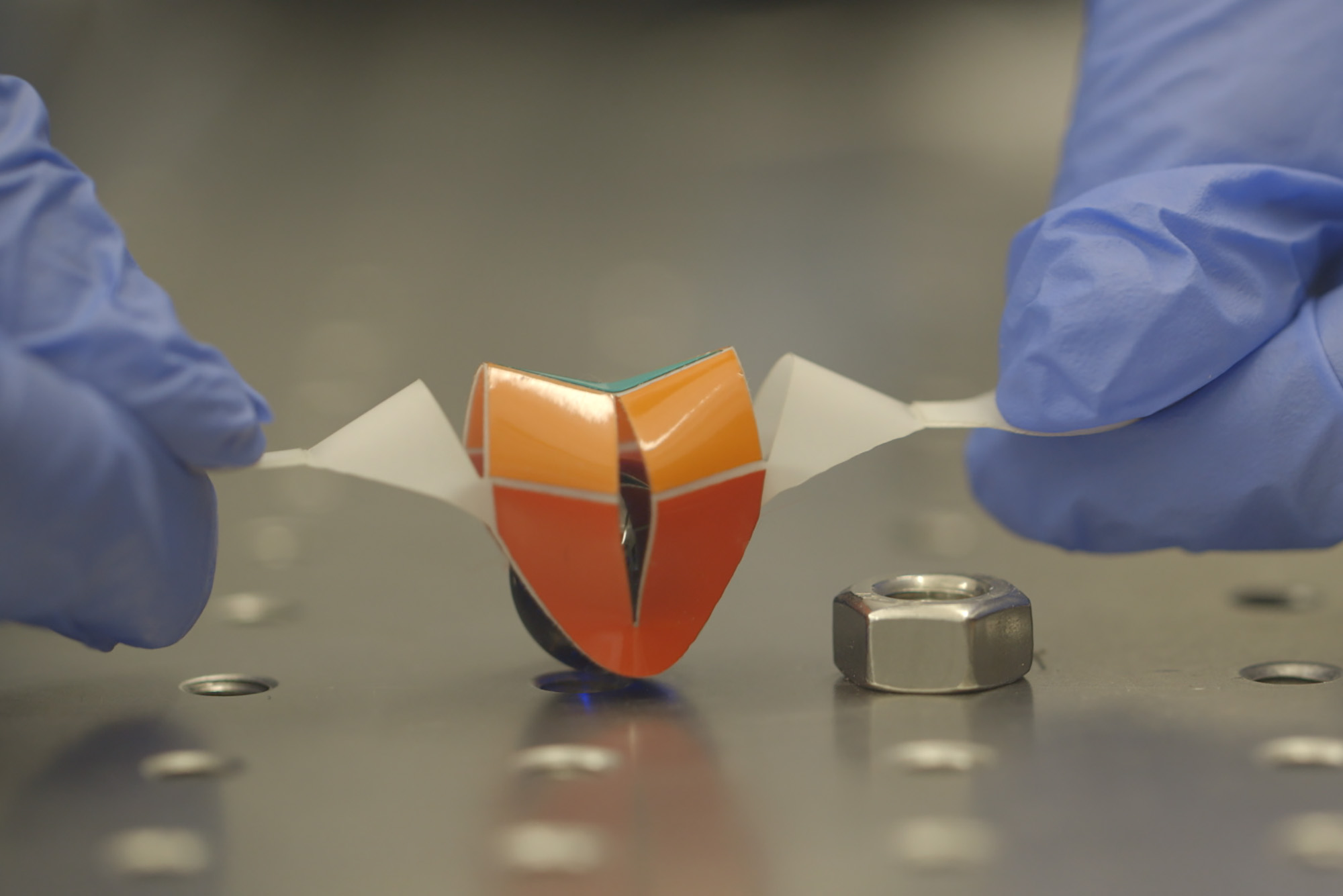 A small, pliable gripper that can help robots pick up delicate objects is among the winners of a 2022 Boston University Ignition Award. Devin Hahn and Aaron Hwang (ENG’21)

From the Lab to Your Life

The BU Ignition Awards help fast-track the commercialization of promising new research, from  a tiny ring that stops chronic pain to soft robotic grippers that can pick up delicate objects

Tiny rings that stop chronic pain. A molecule that targets deadly lung cancer. Robotic hands that can pluck even the most delicate fruit. These are just a few of the innovations under development by Boston University faculty this year—and each of them may be the starting point for new commercial ventures thanks to the BU Ignition Awards.

Each year, BU Technology Development helps to fast-track promising new efforts by providing up to $75,000 to a few select projects. “There are loads of great ideas on campus, but they often need some help to get to a point where they can eventually be adopted and put to use,” says Mike Pratt, (Questrom’13), managing director of Technology Development. “Having early, promising research doesn’t necessarily mean that you have the tangible proof required to motivate someone to invest their time or money into the development of a new product or service.” The Ignition Award program helps to bridge that gap, he says. In addition to a financial grant, award winners receive coaching and support to bring their products to market.

At the moment, there’s no cure for major respiratory diseases like asthma, emphysema, and fibrosis. Part of the reason, says Béla Suki, a College of Engineering professor of biomedical engineering, is that it’s hard to test new drugs in the lab: animal lungs aren’t true analogs for human tissue, and cells grown in a dish can’t replicate our breathing—or the complex biochemical signals breathing triggers in lung tissue. Suki may have solved this problem with a device that uses precision-cut lung slices. Using tissue from organ donors, he mounts several thin slices of lung on a flexible membrane attached to a frame. When the device is activated, this frame moves constantly up and down, stretching the membrane and the tissue, which mimics real breathing. It also lets researchers measure the stiffness of the tissue, which can be a key component of lung disease.

Even with the most powerful techniques available, counting individual viruses—which can be just a few dozen nanometers across—is a long and imprecise process. A new imaging technology developed by Selim Ünlü, an ENG Distinguished Professor of Electrical and Computer Engineering, could change that, letting scientists tally those miniscule objects—an essential step in understanding infection and developing more effective vaccines—quickly and accurately. It works using light interference: after placing parts of a sample onto a perfectly flat, glass-coated silicon wafer, Ünlü shines a light uniformly onto its surface with a new, specially built source. The waves of light shine through the sample and bounce off the chip, scattering slightly as they pass the virus particles. As these scattered waves interact, they cause a bright spot that reveals where each virus particle—or virion—is located. By removing the need to physically move optical elements—current designs require users to shift the focus of light up and down as it passes through the sample—Ünlü’s invention improves the device’s accuracy while reducing its overall complexity.

When it comes to manipulating the world around them, robots often still fall flat. The pincer-like grippers many of them use to grab objects can crush delicate items like eggshells or tomatoes. To solve this problem, Douglas Holmes, an ENG associate professor of mechanical engineering, has created a simple yet pliable robotic hand that can wrap around delicate objects without damaging them. It’s based on kirigami, the Japanese art of paper cutting. By trimming flexible material in just the right places, Holmes creates a diamond-shaped flap; with a slight tug on each end, the edges of the diamond fold down and pinch together, softly grabbing an object below. These new grippers may be useful for automating food harvests, handling tiny live animals, and any other applications that currently require a human’s careful touch.

More than 50 million people in the United States suffer from chronic pain. Over-the-counter painkillers are rarely effective in these cases, and prescription opioids can foster addiction. Chen Yang, an ENG associate professor of electrical and computer engineering and a BU College of Arts & Sciences associate professor of chemistry, is developing a drug-free way to stop intense pain using microwave radiation. She first creates a tiny metal ring with a miniscule gap, then implants it over nerves that transmit pain signals. Once in place, Yang zaps the ring from outside the body with a device that emits ultralow-level microwaves (about the same intensity as a wireless router). The ring amplifies this low signal, concentrating more intense microwaves at the gap. This hot spot can temporarily block the nerve’s signals on demand, preventing pain. With funding, she hopes to continue improving this system with the goal of turning it into an FDA-approved device.

Imagine yourself sitting in a crowded restaurant. There’s a band in the corner, a bartender shaking drinks, a few dozen other diners chatting away. Miraculously, your brain lets you focus in on each of your companions at will, listening to their conversations while ignoring other sounds—a phenomenon known as the cocktail party effect or selective hearing. Kamal Sen’s laboratory has recreated this process in computers using a brain-inspired algorithm. The algorithm uses the audio signals that arrive at each ear to map where a sound source is located in space, and can then focus on that particular spot while drowning out all other sounds. Sen, an ENG associate professor of biomedical engineering and an expert on selective hearing, studies why some people can’t cut through the chatter to pull their friends’ words from the surrounding cacophony. He plans to use two microphones placed on either side of a user’s head to collect the audio signals, and send that audio to an algorithm built into a single chip. This chip could potentially be used for commercial products like earbuds, smart glasses, augmented reality, and hearing aids, adding a selective listening capability to a wide range of devices.

Kidney injury comes in many forms. Some damage takes years to develop; some occurs over a few days or even hours. In the latter case, blood flow to the kidneys is often disrupted, starving the organ of oxygen and nutrients, which kills its cells. Steven Borkan, a BU School of Medicine associate professor of medicine, has discovered a new signal that triggers this cell death, and has worked out a way to stop it in its tracks. The signal works using two proteins that exist within kidney cells: one called Bax, and another called nucleophosmin. Normally, they’re separate, harmless molecules—but when they bind together, the resulting complex kills the cell. Borkan has developed a molecule that prevents the two proteins from binding in the first place, stopping the cell death signal from being created. So far, it’s been used successfully in lab mice, saving their kidneys from an early demise and preventing the animal from dying of kidney failure. Borkan is currently working to improve his molecule’s efficacy, and has begun the process of turning it into a drug that can be tested in humans at high risk of acute kidney injury.

Huge numbers of diseases, from neurological ailments to some forms of cancer, are caused by faulty regulation of RNA, the molecule that carries information to make new proteins in the body. If a second protein latches onto that RNA in the wrong place or at the wrong time, the information within the strand can’t be correctly read by the body, resulting in a deformed version of the protein that the RNA set out to create. In order to treat these sorts of ailments, researchers must find a specific stretch of the RNA where a drug might attach and correct the instructions it contains. Daniel Cifuentes, a MED assistant professor of biochemistry, is aiding this process by developing a new means to evaluate where and how strongly a protein attaches to RNA. Cifuentes’ new technology can decipher both the exact spot where a protein attaches to an RNA strand and how strong that attachment may be. “It used to take days to develop an assay to see if binding occurred on RNA, and even then, we didn’t know how robust that binding was,” says Cifuentes. “Our technology lets us test all of that at the same time in living cells, so researchers can more quickly develop drugs that target those spots.”

Liver damage can sometimes be irreversible. Whether it’s caused by an alcohol dependency or an overdose of common drugs like acetaminophen, the outcome is the same—the organ is in such dire shape that it can’t repair itself quickly enough to save a dying patient. Valerie Gouon-Evans, a MED associate professor of medicine, and Arturo Vegas, a CAS assistant professor of chemistry, are speeding up that rehabilitation process using a new type of nanoparticle. It’s made of a polymer sphere with a strand of messenger RNA nestled inside it. The sphere can home in on liver cells, enter their cell membrane, and release its payload of RNA—which then instructs the cell to make a regenerative molecule that helps it repair damage. “It actually works in a similar way to major COVID vaccines, but instead of giving instructions to your immune system, it’s instructing liver cells,” says Gouon-Evans. If this sort of treatment is given to patients early enough, she thinks it might help save the lives of people with acute liver injury. Gouon-Evans and Vegas are currently working to make the technology more robust, and plan to introduce it to drug companies in the near future.

A One-Two Punch for Cancer

Squamous cell carcinoma is a deadly prognosis: only about one-fifth of patients live more than five years after developing this aggressive form of lung cancer. Mark Grinstaff may have found a way to improve those outcomes, thanks to a new receptor—a flag-like molecule—he discovered on the surface of lung squamous cells. Grinstaff is a BU Distinguished Professor of Translational Research, a William Fairfield Warren Distinguished Professor, an ENG professor of biomedical engineering and materials science and engineering, a CAS professor of chemistry, and a MED professor of medicine. He is developing specially made antibodies that can latch onto those receptors while carrying a payload of chemotherapy drugs—creating molecular homing missiles that hunt down the cancer cells and destroy them. He’s working to make this combined molecule, called an antibody-drug conjugate, more effective by adjusting the chemical structure of the antibody and standardizing the way that a drug molecule binds to it. With early success in the lab, Grinstaff hopes to attract drug companies to develop and test this treatment in humans.

BU Ignition Awards–From the Lab to Your Life