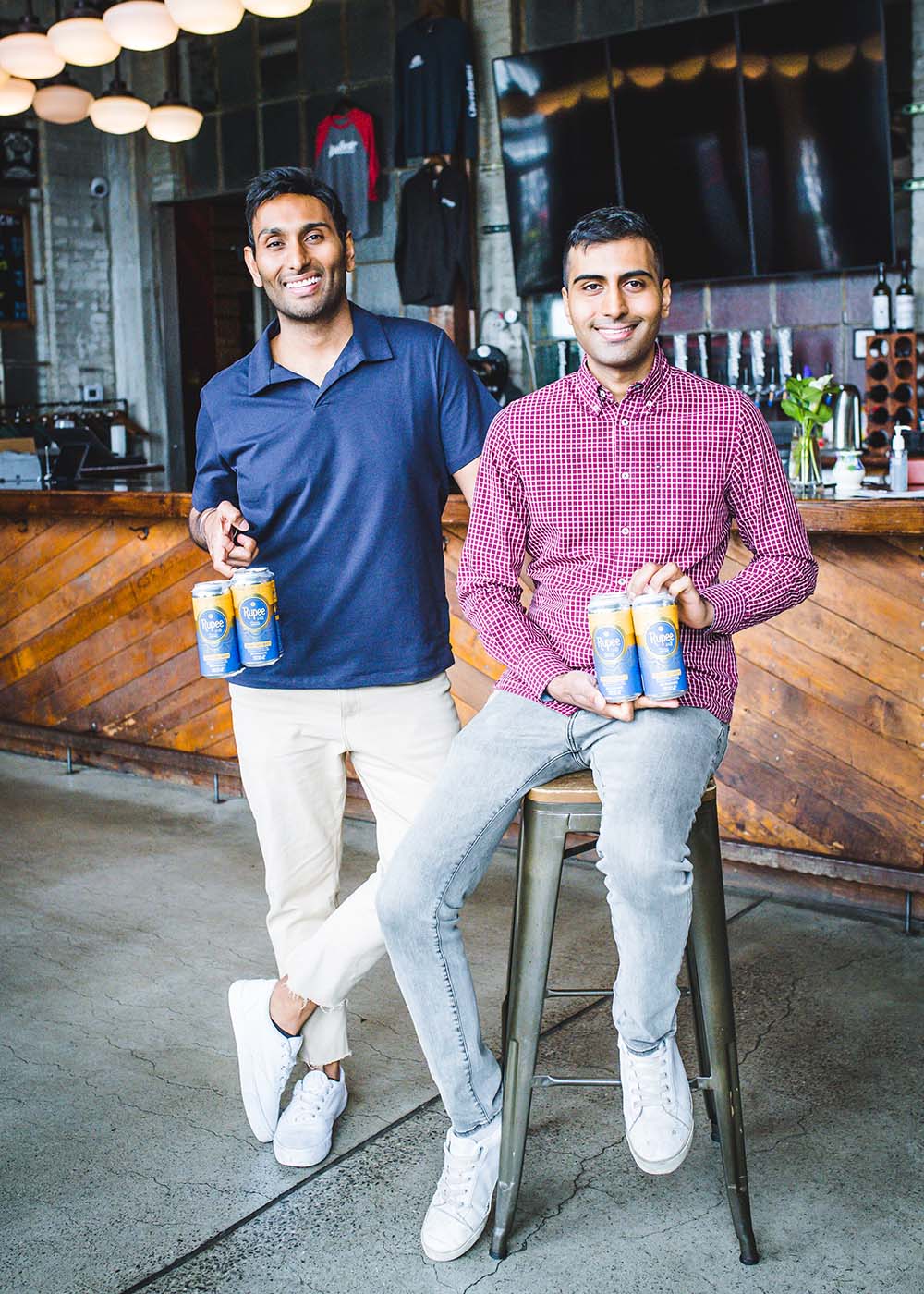 Just before July 4, my neighbor cooked up a vegetarian Indian feast of garlic and potato curry, cauliflower and potato nu shaak, smoky eggplant, paneer, yellow rice, and whole-wheat roti hot off the griddle. I brought the beer.

To be specific, Rupee Beer, a bright golden lager created by two Indian-American brothers, one of them a BU alum. Each can boasts that the brew is “specially crafted for Indian and spicy cuisine” with rice, maize, malt, and three kinds of hops, as well as lower carbonation, for a more enjoyable dining experience.

When we pushed back from our plates, we agreed with the label’s other boast—that it’s “unforgettably smooth.” It went down easy, for sure.

“We’re getting a lot of great feedback from people who don’t normally like beer, because it’s so smooth and easy to drink,” says Sumit Sharma (Questrom’14). “We made it to go really well with Indian food.”

Sumit partnered with his brother Vanit, a Northeastern grad, to create Rupee, named for the Indian currency. The beer is brewed under contract at Dorchester Brewing, currently at a rate of 60 barrels a month, or roughly 600 cases. The beer is available in 16-ounce cans at stores and Indian and Thai restaurants in Maine, Massachusetts, and New Jersey, with more states and more production coming soon.

The brothers have big plans, but bringing a new beer to market is a complex enterprise, with different laws in every state, different distributors, different systems. “It’s not one of those things where you can snap your fingers and overnight you’re in 50 states,” Vanit Sharma says. “It’s definitely going to test your patience.”

Their family has more than 40 years of experience in the restaurant business, Sumit says, having opened several Indian restaurants in Maine back in the early ’90s. The Sharmas’ parents live in Portland and still run their flagship, the Bombay Mahal in Brunswick, the oldest continuously running Indian restaurant in the state, where Rupee is now the only Indian beer served.

That’s not just nepotism: Rupee exists only because popular Indian brands such as Kingfisher and Taj Mahal were difficult to obtain for the Bombay Mahal even before pandemic-induced global supply chain problems. Sumit was working in the hospitality industry in Australia and Vanit was working at a start-up in London when the pandemic and other factors brought them both home to Maine in early 2020.

“Of course my dad was like, ‘Hey, my kids are back home, maybe they’ll want to help me out at the restaurant,’” Sumit says with a smile. “We grew up working there, helping out when we were in middle school and high school. He was glad to have us back and we helped modernize some things at the restaurant a little bit.”

But they found out that Indian beverage companies didn’t want to sell their beers in Maine, perhaps in part because it was a small market. And then COVID kicked in, hitting the supply chain. “It came to a point where we didn’t have any Indian beer in the state, so that’s where the idea came from,” Sumit says. “My brother said, ‘Why don’t we try it?’ We had already thought in the back of our heads about making our own beer, and this was the perfect time. We were both home, and with COVID, there wasn’t much else to do, so we decided to act on it.”

Coincidentally, one of their parents’ neighbors and friends was Alan Pugsley, cofounder of Portland’s Shipyard Brewing and a renowned brewery consultant, nicknamed the Johnny Appleseed of craft beer.

“He has helped set up 80 breweries around the world, but he was excited to help us because he is from England, and the curry culture over there is much bigger than it is here. It’s kind of like what Tex-Mex is to Americans,” Sumit says. “He loves Indian food, and he loves beer, obviously.”

They collected samples of as many as 10 brands of Indian beer and held a big tasting dinner at the restaurant. “We told Alan what we did and didn’t like about specific beers in terms of everything from bitterness to color to carbonation,” he says, which kicked off months of trial batches at Geary Brewing Company in Portland, until they got the Rupee recipe they wanted. “We wanted the carbonation levels a little lower, because Indian food can be heavier and spicier and pairing it with a heavier carbonated beer can make you full.”

Also, as one reviewer notes, “a more intense and ‘prickly’ sense of carbonation can be unpleasant while your mouth is burning from chile spice.”

Rupee’s alcohol level is a modest 4.75 percent, considerably lower than the 7 or 8 percent of many of the trendy craft beers now dominating the shelves of local package stores.

As for the name, “we wanted something that paid homage and tribute to our Indian culture,” Sumit says. “A lot of people already know it, and not just Indian people. And our family is a very entrepreneurial family, so it played off of that, too.” They hired a designer in India who produced the striking blue and yellow label that might be one of their best selling tools, blending traditional and modern notes.

You can find Rupee at 70 locations across Massachusetts, in restaurants and bars including Fuller’s BU Pub and Shanti in Dorchester, plus Passage to India and Desi Dhaba in Cambridge. Among local retail stores selling it are Fenway Beer Shop, Wild Duck locations in the North End, Mass Ave, and Chinatown, and Get-N-Go Boston.

As for the division of labor, Vanit focuses on marketing and sales while Sumit works more on the back end, with logistics and finance. “Obviously, as a member of the founding team you have to chime in wherever needed,” Vanit says.

It’s not lost on the Sharmas that they are in a very white industry. “Often when we are having business discussions, we are some of the only two folks of color in those discussions,” Vanit says. “It’s a nuance. I see it day in and day out. It’s not necessarily something that gets to us. But in terms of talking about it more openly, I am a huge proponent of [diversity and inclusion] and bringing in more people [of color]. Being of Indian origin and looking different and not coming from a brewing background, it definitely is something that comes up.”

The brothers have day jobs as well—Sumit in real estate and development, Vanit in technology sales—but they have high hopes of expanding Rupee’s reach, especially along the routes of the Indian diaspora, which they know well. Their father was born in India, but their mother was born in Kenya, and the family lived in Germany and London, where Vanit and their third brother, Vikash (a physical therapist in New York), were born, before coming to the United States.

“Originally we made this beer to solve the problem we were having in the restaurant,” Sumit says. “But it turned out to be bigger than that. There’s demand coming to us every day, on email and social media, from people in England, Australia, Canada, Trinidad, and Thailand. But we are trying to go state-by-state in America first.”