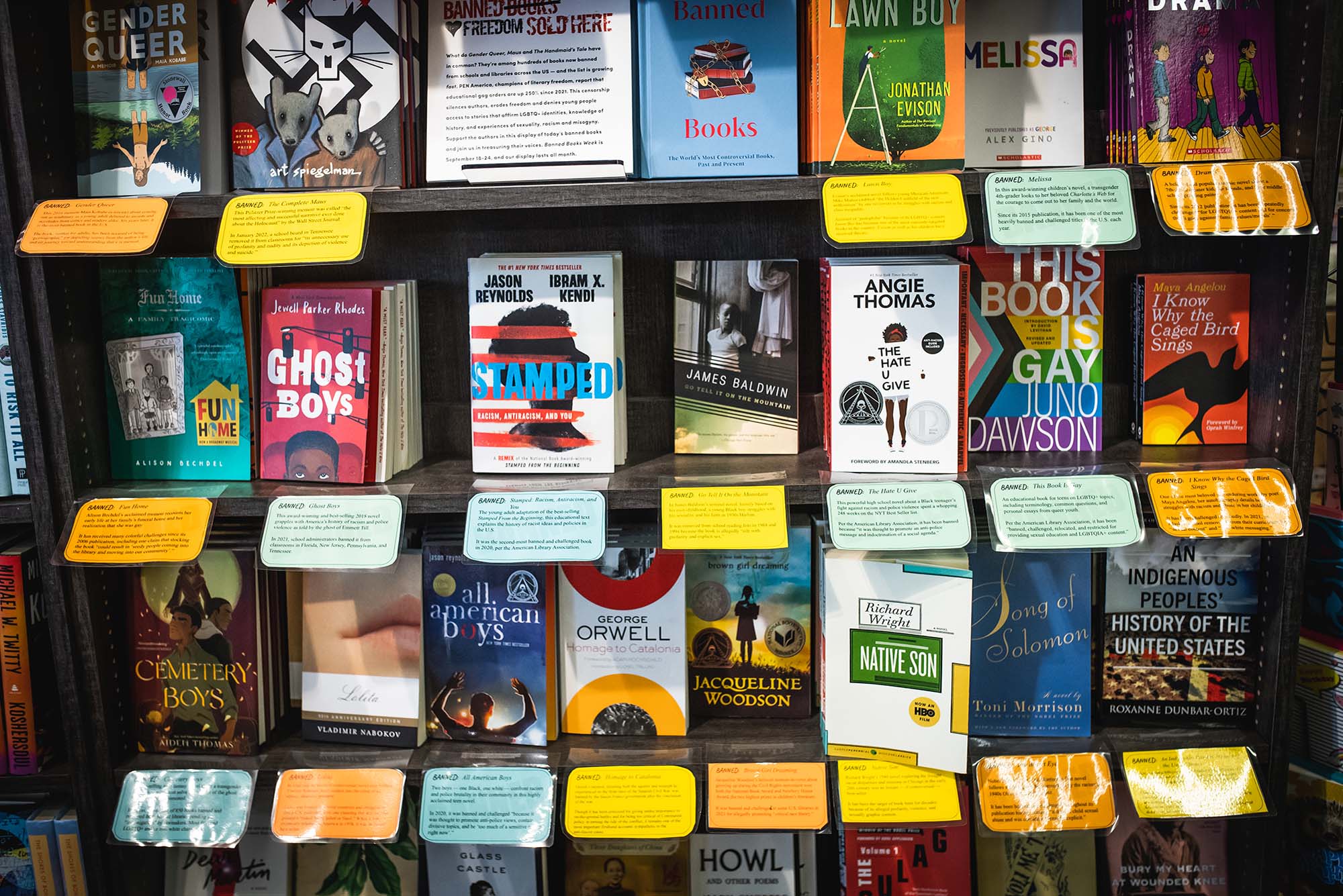 The books displayed have cards explaining when, where, and why the book was banned.

Want to Find a Banned Book? Brookline Booksmith Has Some on Display

Includes over 30 banned books from around the country

Banning books is still very much a thing. Between July 2021 and July 2022, 1,648 book titles by 1,261 different authors were banned in schools. These bans occurred in 5,049 schools in 138 school districts across 32 states. The states with the most bans are Texas, Florida, Pennsylvania, and Tennessee, according to PEN America.

But here in Massachusetts, one of the states with zero banned books, Brookline Booksmith wants to be sure that banned books are seen, not hidden. The independent bookstore and local student favorite has participated in September’s annual Banned Books Week for several years. And last summer, the bookshop went a step further, creating a semipermanent banned books display that includes more than 30 titles spanning the last two centuries.

Created in May 2022, the current display, housed in a large bookcase, was spearheaded by booksellers Kay Frost, Matt Gregory, and Patrick Walsh in collaboration with the store’s book-buying team. When book bans jumped and those banned were most frequently written by or about LGBTQ+ people and people of color, the store decided to start a community conversation about the issue.

“For us, it felt like a ‘canary in the coal mine’ moment,” Frost says. The Brookline Booksmith team wrote educational cards to go with each book, explaining when, where, and why the book was banned. Frost describes the response to the display as “overwhelmingly positive” and says it has been great to see customers start and engage in a conversation.

According to the Brookline Booksmith website, “This censorship silences authors, erodes freedom, and denies young people access to stories that affirm LGBTQ+ identities, knowledge of history, and experiences of sexuality, racism, and misogyny.”

The bookstore display includes notable books banned in the 20th century, like Leaves of Grass, The Satanic Verses, and Lolita, as well as books targeted in the last five years, such as Gender Queer: A Memoir, The Complete Maus, The Hate U Give, and Melissa.

Among other books in the display are The Handmaid’s Tale, I Know Why the Caged Bird Sings, The Awakening, The Bluest Eye, Homage to Catalonia, Tropic of Cancer, Go Tell It on the Mountain, This Book Is Gay, The Glass Castle, and Fun Home.

“Book banning—all forms of banning—is a method extremists have used throughout our history to control the narrative of who we are as a country,” Jiménez says. “Banning communication is a way of separating us from our communities and ourselves.”

Jiménez also notes that over half of banned books in the past few years have been children’s and young adult fiction, most often affecting municipal entities like libraries and schools that provide resources to local communities.

“These are texts where kids can go and safely explore far-off places and times, they can safely see the ways life choices unfold,” she says. “I think that is why children’s and YA [books] is seen as so incredibly dangerous to these extreme groups—they fear that without control, the changes we have seen in society, a loss of centralized power, will continue.”

Brookline Booksmith used data gathered by PEN America, a nonprofit that promotes free expression in literature, and the American Library Association to curate its display. At this time, the bookstore has no plans to take down the banned books section.

Want to Find a Banned Book? Brookline Booksmith Has Some on Display

There are 2 comments on Want to Find a Banned Book? Brookline Booksmith Has Some on Display

Want to Find a Banned Book? Brookline Booksmith Has Some on Display
2
share this